You may have gone to Buffalo RiverWorks for a meal or a pre-game drink with your friends.

Perhaps you've been there to cheer on the Queen City Roller Girls, see an MMA fight or for ice skating.

Since opening in June 2015, Buffalo RiverWorks has become a game-changer for sports and entertainment in downtown Buffalo. With a restaurant and bar, two outdoor ice skating rinks that transform during the warmer weather for other activities, and a main building for larger events, the 60,000 square-foot mixed-use facility hosts a diverse array of activities - and there's more to come. 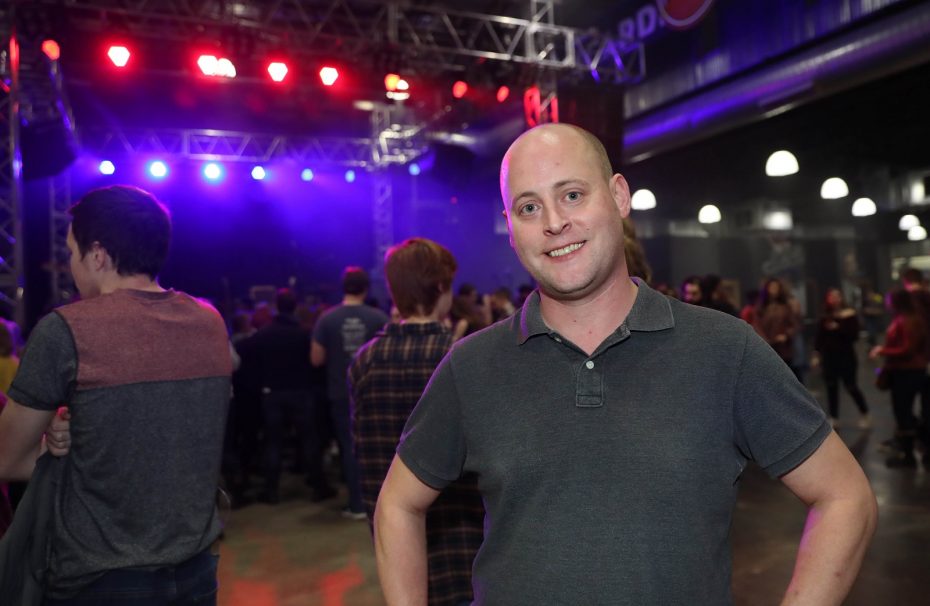 Marc Vitagliano is the bar and operations manager at RiverWorks and serves as the unofficial entertainment director. (Sharon Cantillon/Buffalo News)

It started slowly: RiverWorks hosted its first major ticketed concert with the Borgore-headlined "Safe in Sound" tour in September 2016, a show Vitagliano referred to as “getting our feet wet.” Anyone familiar with the intense, high-energy atmosphere of an EDM show knows it was probably more like a baptism by fire.

Buffalo RiverWorks became a major player on the local concert scene. The venue has been an ideal place for The Kerfuffle Before Christmas concerts. See scenes from the opening…

But since September, bands including Foster the People, A Day to Remember and Zed’s Dead have performed on the RiverWorks main indoor stage. In October, the all-day 103.3 the Edge HRVST Fest rocked the outdoor area where the ice rinks are now in play.

Coming soon: A hardcore Christmas concert with music by local favorite Every Time I Die on Dec. 16, the last of the three-part Alternative Buffalo "Kerfuffle Before Christmas" series on Dec. 17 and pro wrestling and fest-favorite jam band Lotus on Dec. 30 for good measure.

Part of the allure is that RiverWorks, which comfortably houses 3,000 for concerts at its indoor main stage, has filled a gap between Buffalo’s midsize venues and the larger KeyBank Center which can seat up to 20,000.

“We haven’t had an indoor music venue of that size at all," area music promoter Mike Marshall of MNM Presents said of RiverWorks where he has booked multiple EDM concerts. "Shows have been forced to go to Rochester or Niagara Falls, and now they can come here. Downtown Buffalo – right on the water -- it’s fantastic.”

Plus RiverWorks ups the ante because it offers much more than a stage. HRVST Fest featured craft beer vendors on the adjacent ice rink area. TID the Season – Buffalo-bred hardcore band Every Time I Die’s annual Christmas show – will feature professional wrestling. Marshall said it’s only a matter of time before someone takes advantage of the full array of entertainment RiverWorks offers.

“You can tell the bands, ‘You guys want to have a meet-and-greet contest on the ice? We can do that,’” Marshall said. “’You guys want to go rock climbing after sound check? Go right ahead. Want to take the kayak for a spin?’ These are things that I don’t think any other venue can or will be able to offer.”

Seeing that After Dark Presents and ETID is putting on a wrestling-music dual show, Marshall said he wants to raise the bar. “I don’t think some of these dub-step kids would mind jumping in a wrestling ring,” he said. “I wouldn’t be surprised if one of the amenities of the rooms is incorporated into a show in 2018.”

Music fan Chris Prenatt had never been to RiverWorks before attending the outdoor HRVST Fest and the indoor A Day to Remember show, both in October.

“I didn’t know that RiverWorks was this gigantic sports complex – that really threw me off at first,” Prenatt said. “I was amazed. I saw the pinball tables, the games, the bars. I’ve been to places like Waiting Room, Town Ballroom, Stamp’s, Mohawk Place, and those are just small little bars and venues. So when you have somewhere like RiverWorks, which is this gigantic place that also has two hockey rinks in it, it’s like, ‘This is a music venue?’ ”

The positive visitor experience extends in other ways. Three bars – one upstairs, two down – and a concession stand mean less time waiting in long lines. The concession stand near the main entrance offers an unobstructed side view of the main stage, so you’re not missing the show. A 16-ounce house-brewed craft beer is about $6.50 - less than what you often pay at major arenas and concert grounds. Domestic cans, including Labatt Blue and Blue Light, are $6, and well/premium liquor drinks are $5.50 to $7.75 – also a steal. 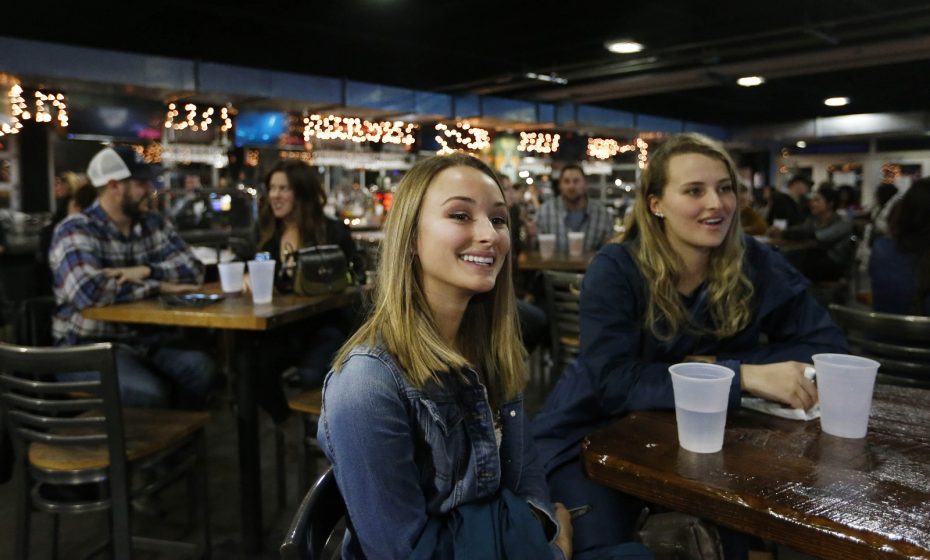 Taylor Billings, left, and her sister Madison, both of Lancaster, watch the Kerfuffle Before Christmas from the bar area. (Sharon Cantillon/Buffalo News)

Even during a sold-out show, RiverWorks fits its max capacity comfortably – there’s still room to play pinball, have a rest at a table or check the score of a game on a TV at the back bar area.

Depending on the show, the upstairs area may be VIP-only or general admission. A great vantage point is always available as the general admission standing area wraps around the main stage, plus the rear bar/restaurant area is elevated above the main floor.

With a prime location in the industrial outskirts of downtown Buffalo, parking is plentiful around RiverWorks. Gravel lots extend from the main entrance and parking is often free or an inexpensive $5 around the area.

Vitagliano refers to RiverWorks as a “transformer.” For main stage concerts, a large removable platform is installed to extend the otherwise small indoor stage area. Audio and lighting equipment – most of which is rented for now – is put up and taken down between shows.

Vitagliano and his staff are experimenting to see what will work best long-term. The plan is to build a permanent audio and lighting truss above the main stage, and the extension of one of the main stage walls also is being considered. 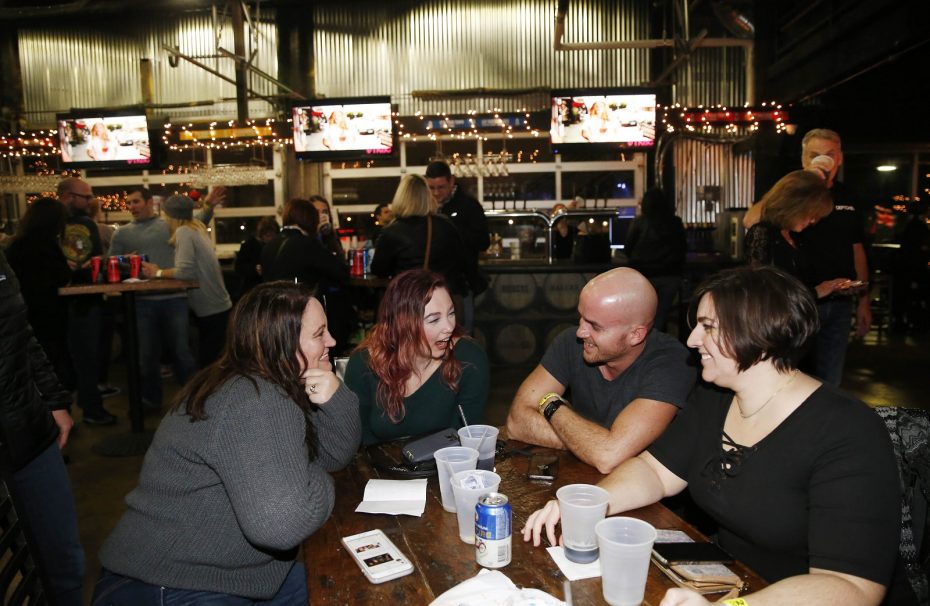 A group sits in the bar area to watch the Kerfuffle Before Christmas: Night One. (Sharon Cantillon/Buffalo News)

There also are plans to convert the “rail barn,” a former grain transport facility next to the silos into a separate concert venue. This would allow RiverWorks to host small-to-midsize shows without closing the main bar and restaurant area to the public. It currently stays open for lunch then closes to the public before dinner for ticketed concerts.

As RiverWorks settles into its role as a major player in the Buffalo concert scene, even bigger things are in the works. Creating a music festival that fully utilizes the sprawling complex’s diverse areas and facilities is a “primary focus,” Vitagliano said.

“Our job here is to entertain Western New York," Vitagliano said, "and we intend to do so.”

It's a busy winter for RiverWorks. Here's a look at ticketed events.

Tid the Season with Every Time I Die, gates at 1 p.m. Dec. 16. With Eighteen Visions, Pup, Reggie & the Full Effect, Frank Iero + the Patience, Knocked Loose, Vein and Bungler. Plus all-day skating and more than 10 professional wrestling matches. All ages. Info: TidTheSeason.com