On a wintry day in which they would likely close all schools, the Buffalo Bills and Indianapolis Colts played an NFL game for the ages in what looked like inside a snow globe.

And just when the Bills season needed a revival, under the worst conditions imaginable, most all ye faithful did indeed come… and left joyful and triumphant.

The Bills’ season, and this game, which had had more ups and downs than a 5-year-old first learning how to skate, went from incredulous to incredibly fun. That was not only the most snow but the most pure fun and frolic a lot of fans can remember.

For possibly the first time in NFL history, the fans were as tough and hearty as the players.

Kyle Williams proclaimed Bills fans the toughest damn people anywhere. Opposing Colts players went out of their way to say we were the best in the league. National pundits agreed, or at least couldn’t argue against.

The shots of the stalwart faithful in the frozen stands were as good as the ones down on Kissing Bridge, er, New Era Field.

Sean Kirst: A housecleaner, 2 boys, some Buffalo Bills and a car stuck in snow

In a city known for snow, no one could ever remember a game quite like this. And ultimately, the game had everything, at least what you could see of it.

Fan darling, Tre White, who had never played in snow before, was Dancer, Prancer and Rudolph leading the way with an all-red jersey instead of a red nose. The pure joy of seeing White dancing between plays would warm the cockles of the most cold-hearted Scrooge.

Even the punt game was incredible. The Bills’ Reid Ferguson and his Colt counterpart, Joe Nobody, were extraordinary, with neither one missing one long snap all afternoon.

Kelvin Benjamin played the Jolly Red Giant and pulled down two passes over everyone’s head but his, including a well-thrown jump ball by Nathan Peterman in the end zone for the Bills first score.

Peterman did all he could in the obscene conditions before getting cheap-shotted out of the game, into the injury tent, and then the NFL concussion protocol. The officials blew the obvious leading with the crown penalty, although Nate needs to learn how to sled.

All-purpose Swiss Army Knife, Joe Webb, replaced Nate, and carved through the Colt defenders, showcasing his invaluable versatility to those unfamiliar with his career. There is not a player like him in the league who can play as many positions, and some of them well.

Late in overtime, playmaker Deonte Thompson came down with a spectacular haymaker from Webb, who is somewhere between third string and emergency QB. Thompson miraculously had to show the ball to the referees that he’d caught it before the play was even over.

Excluding the blatantly missed call for spearing, the officials did well in Ice Station Zebra just to spot the ball and keep the game moving.

And we won’t even bother arguing over the punt call, as that decision and subsequent controversy has already ruined too many conversations after an important and historic win.

To me, it was hitting on 18 in blackjack and winning the hand. Great call because you won; lousy call 90 percent of the time.

Shady plowed his way for 150+ yards and the breakaway downhill toboggan ride for the game-winning romp. Once McCoy broke through the line like he was in a one-horse open sleigh, everyone knew it was just some smooth sledding until it was all over.

And then the team played around in the snow like little kids and made snow angels for a few more minutes.

This is what the holiday season is supposed to be like – it just happened at the winter wonderland last Sunday in Orchard Park. 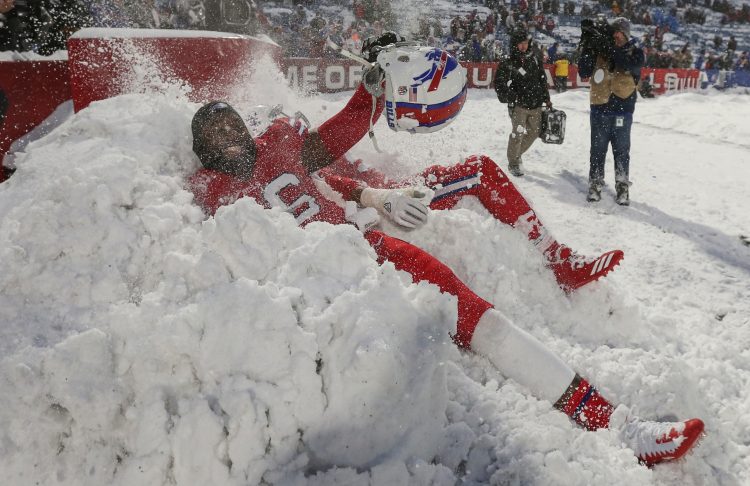 And this week it could happen all over again as the Dolphins come to town, fresh off a huge upset of the Patriots on MNF.

The Bills organization may need all ye faithful to come one more time in order to keep their playoff hopes alive.

And once again leave joyful and triumphant.