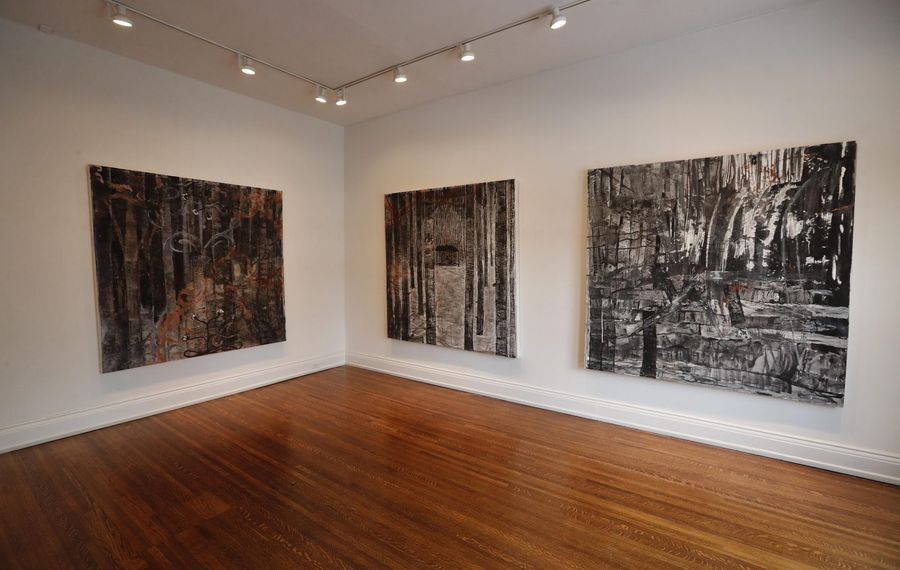 In the center panel of a triptych by Buffalo painter Rodney Taylor sits a stout little cabin surrounded by a huddle of scorched trees.

The cabin belongs to a slave, Taylor explained. And it appears to be on fire.

The first panel in the triptych depicts a dark and foreboding patch of woods, through which a visitor would presumably have to travel on his way to the cabin. The scene evokes Charles Burchfield's woodland fantasias, but several shades darker and overlaid with menacing flowers and filigreed tendrils reaching with uncertain motives to uncertain places.

The last panel, a masterful monochrome accented by thin lines of copper, demonstrates a woodland explosion in which fire consumes a section of the forest.

What's going on in these paintings, each one so visually arresting and laden with meaning? Well, certainly nothing good.

But if you stand there for a few minutes, looking closely and letting your mind wander around the possibilities, you'll be better primed to engage with the rest of the exhibit at the Nina Freudenheim Gallery.

For Taylor, as for many of us who dare to venture into the woods alone, "the forest projects a lot of mystery, a lot of intrigue, a lot of unknown, a lot of fear."

What led him to paint this narratively rich trio of paintings centered around a cabin, he said, were thoughts about history and property, and especially the way human bodies were used as commodities during periods in American history several shades darker than today. 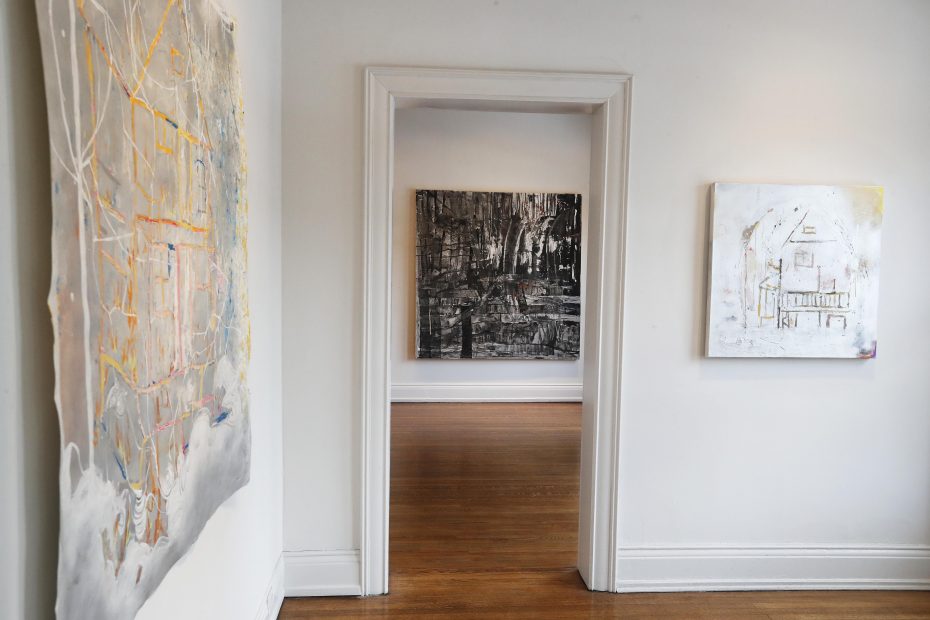 Rodney Taylor's works on view in Nina Freudenheim explore the notion of home in a chaotic and often unfriendly world. (Mark Mulville/Buffalo News)

To those who look for stories in the paintings they love -- a highly recommended strategy, whatever an artist might say -- this piece is the strongest in the show. It comes from a different series than the rest of the work on view in the gallery, which contains Taylor's unframed paintings reflecting on the notion of home.

While these rudimentary paintings of homes, inspired by buildings Taylor spotted in his neighborhood, might seem to speak to some notion of comfort or security in a changing world, he puts that notion to rest immediately.

"I'm not interested in people's comfy life," Taylor said, noting that he purposely keeps his studio cold and uncomfortable as a reminder that he is there to work. The new paintings, he continued, were motivated by a concern about those who lack places to live whose ideas and aspirations about home have been fractured by the threat of deportation. 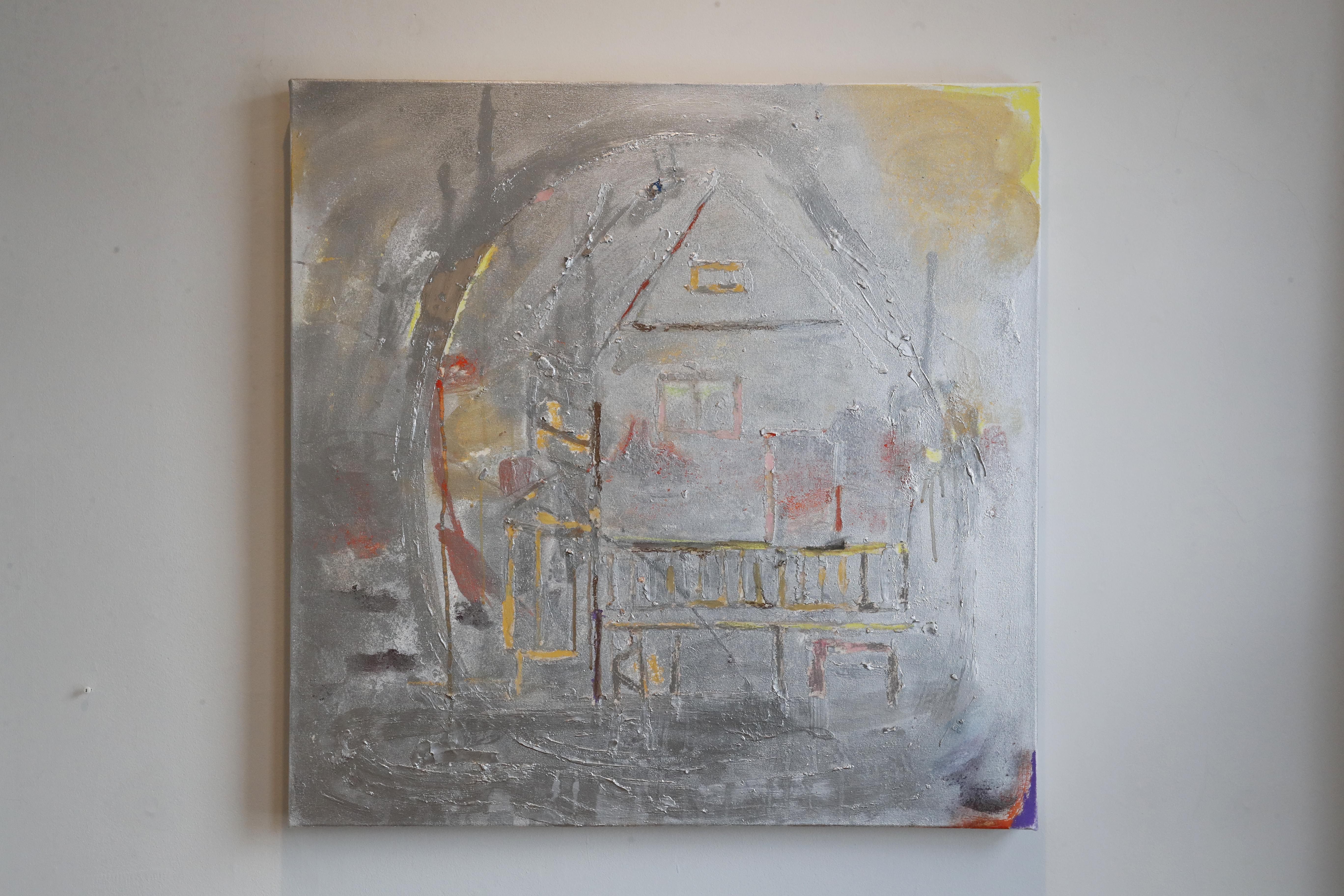 Viewed this way, Taylor's smaller paintings seem to portray the structures we live in -- or aspire to live in -- as under constant threat from the surrounding environment.

In his view, this environment is rendered in bold and often clashing colors, against shimmering backdrops of metallic paint and criss-crossed with abstract networks of lines or currents of copper color borrowed from his triptych. Metallic elements like nickel and copper sweep across the triptych like wisps of acrid smoke or tributaries of poison.

Perhaps the most arresting of Taylor's home paintings is a piece covered almost entirely in reflective metallic paint that barely shows the outline of a house, like a tattoo someone is trying to cover. In another, flames are visible through broken windows, a common sight in a city with more than its share of abandoned and fire-prone houses and a reference to his smoldering slave cabin.

In Taylor's world, as demonstrated in this engrossing exhibition, there is danger within and danger without. And comfort is an idea for other people. People whose homes are not under attack.