Marine Capt. Maurice L. "Chipp" Naylon IV is in town until Thursday to support his father, who has worked for months pulling together Saturday's commissioning ceremony for the new USS Little Rock at Canalside.

But it's not only because of the work of his father, Maurice L. "Moe" Naylon III, and other commissioning committee members that the 30-year-old Afghanistan combat veteran has come home. He says he wants to be part of the commissioning week celebration because it will showcase Buffalo.

"I know Buffalo is a great town and I'm excited for the rest of the country to see it," he said.

This is typical of the young man who goes by "Chipp," starting from when he was a boy and added a second "p" to his nickname. But that's just one of the clues that he's different.

Over and over growing up in Williamsville, he heard the family stories of Maurice L. Naylon Jr., a World War II Navy aviator killed in the Philippines. He was so moved by them that he decided he too wanted to be a patriot and pay tribute to his lost relative. The military satisfied those goals.

As a teenager, Naylon worked hard at Canisius High School so that the Navy would regard him as the perfect candidate for the U.S. Naval Academy. Besides earning As, he played varsity football and lacrosse. He rounded out his resume by serving as a volunteer with local organizations.

The strategy worked. He began his military career at the Naval Academy in June 2005. But while there, something unexpected happened.

"The senior officer in my company was a Marine major and he impressed upon me the significant responsibility and leadership opportunities I would have as a Marine Corps infantry officer, and he was someone I aspired to follow," Naylon explained of how he veered into the Marines following graduation.

And since the Marines are part of the Department of the Navy, Naylon did not think his switch would diminish his intentions of honoring his great uncle, known to him  simply as "Uncle Moe."

Naylon never met him, but feels they are kindred spirits.

"Based on what my grandpa, Uncle Moe's youngest brother said, we have a lot in common. We share a desire to serve, see the best in things regardless of how difficult they are and find a way to laugh," the grand nephew said.

And like his great uncle, Naylon fought for the nation.

His journey to Afghanistan started in May 2014 when he was sent to the Republic of Georgia to serve as a combat advisor to a Georgian armed forces battalion.

"I was part of a small team of Marine advisors and we embedded with the Georgians. We did everything with them and tried to lead by example. Success in combat would depend on the trust and rapport we built with them before going to Afghanistan," he said. 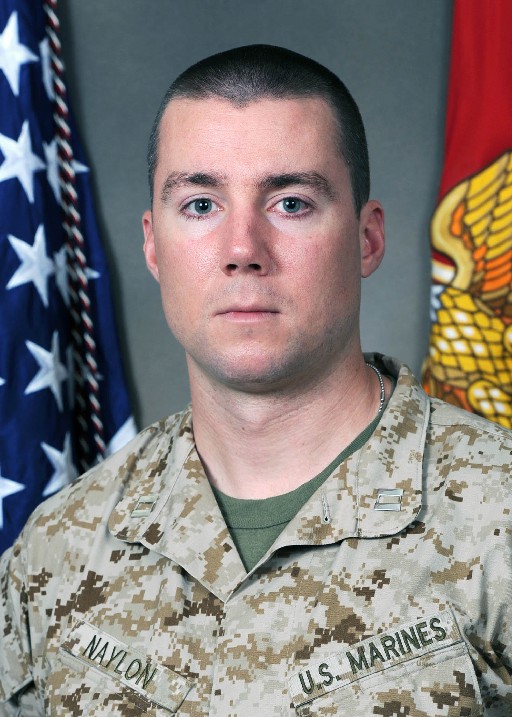 The Georgian battalion, part of the NATO International Security Assistance Force, deployed to Afghanistan in September 2014.

"We had two roles we were responsible for at Bagram, the largest base in Afghanistan," Naylon said. "Inside the post, we controlled the entry and exit points. Outside, we conducted combat operations to disrupt insurgent improvised explosive devices and rocket attacks."

On those "outside-the-wire" patrols, Naylon and other Marines worked with not only the Georgians but Afghan army and police personnel.

Whether they were inside or outside, the work was dangerous.

"The base was regularly hit by rockets and our patrols faced multiple IED and suicide-vest attacks," he said.

One of the worst involved a suicide bomber on a motorcycle. He raced up to the patrol and ignited his bomb-laden cycle, seriously wounding two Georgian soldiers.

"Without hesitation or regard for his own safety, our Navy corpsman, we called him 'Doc,' ran to the Georgians and applied tourniquets. By stabilizing them, he allowed them to be evacuated by helicopter.

"At the hospital, once they were out of surgery, the surgeon stated that without Doc both would have died. Watching Doc's actions, I couldn't have been prouder," Naylon said.

In his seven months in Afghanistan, there were many attacks, but his unit was spared fatalities.

After returning to the United States in 2015, he started teaching Navy and Marine units how to plan amphibious operations. But in his spare time, Naylon found another passion. He began working with an organization called Troopster that simplifies the process for friends and families of deployed military members to send personalized care packages.

Navy Petty Officer Chelsea Mandello started the organization, Naylon said, "after a particularly difficult deployment. She realized there had to be a better way for families to support their loved ones overseas."

The military postal system, he explained, can be complex and sometimes care packages never arrive.

Relatives, Naylon added, are often overwhelmed with covering the bases on the home front and the emotional stress caused by the absence of their loved ones.

"Troopster makes it easy to send care packages without adding more stress than these families already face," he said of the website enterprise, Troopster.org.

The organization is one of a number of sponsors helping underwrite the cost of the Little Rock's commissioning ceremony at 11 a.m. Saturday at Canalside.

"Chelsea will be here for the commissioning to spread awareness about Troopster to the Little Rock crew and the local community," he said.

As for Naylon and the military, he says he will continue to serve until next summer. At that point, he and his wife, Jenna Naylon, will settle in Richmond, Va.

She too will be here for a couple days to celebrate the Little Rock's commissioning.