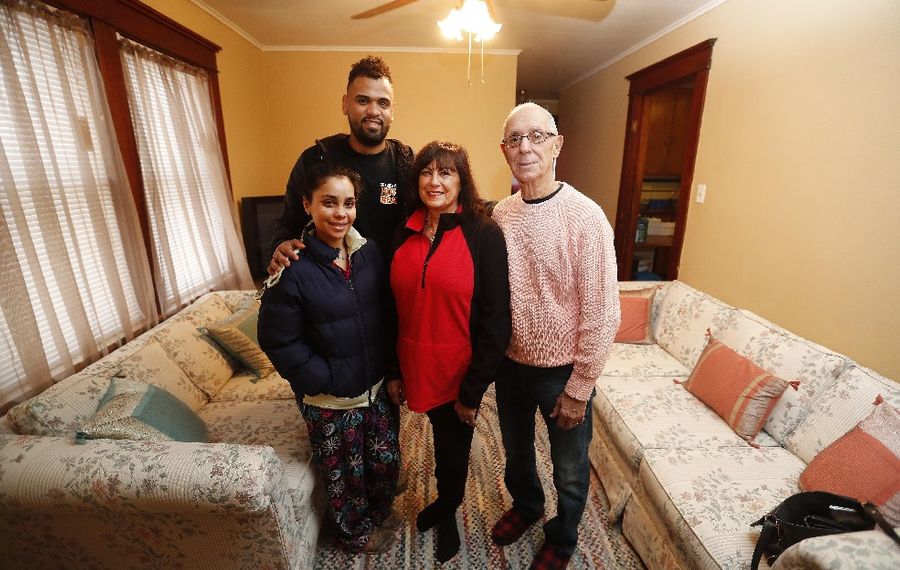 Elizabeth Marie Ortiz Olivencia pushed back the shades of the living room window a few days ago in her Black Rock neighborhood. A coating of snow, not even an inch of it, covered Rano Street and the small front yard of her home. It was nothing to most of us, a December dusting, but to Elizabeth it was miraculous, a revelation.

It was the first time in her life that she had seen snow.

"I can't wait for the children to see this," she said to her husband, in Spanish.

That response was no surprise to Joe Di Leo, who watched from the dining room table.

"They always think first of their kids," said Di Leo, 77, a retiree from the U.S. Postal Service.

They arrived with little more than they could pack into a suitcase. Francisco already was here. Laid off months ago from a job in a contact lens plant, amid hard times for the Puerto Rican economy, he had traveled to the mainland to seek better work.

By sheer chance, he missed the September hurricane that overwhelmed Mayaguez, their community in Puerto Rico.

"We want to move forward here, with our family," Elizabeth said of Buffalo.

When Di Leo first saw their apartment, there was no furniture, no refrigerator, no beds. The three children were lying on the floor, watching a tiny television.

"We took an inventory of what was needed," he said, "and it was everything."

Elizabeth and Francisco speak of Di Leo and his wife, Toni Marie, as "a gift of God." Di Leo, a native West Sider, won't take that much credit. He gives thanks to a group of friends he's buddied around with since he was a teenager in the 1940s in Buffalo "on Lower Terrace, in the shadow of City Hall."

He was the son of Italian immigrants, who came here as children. He compares his grandparents to Elizabeth and Francisco. They were newcomers who spoke no English, who started from absolute scratch. 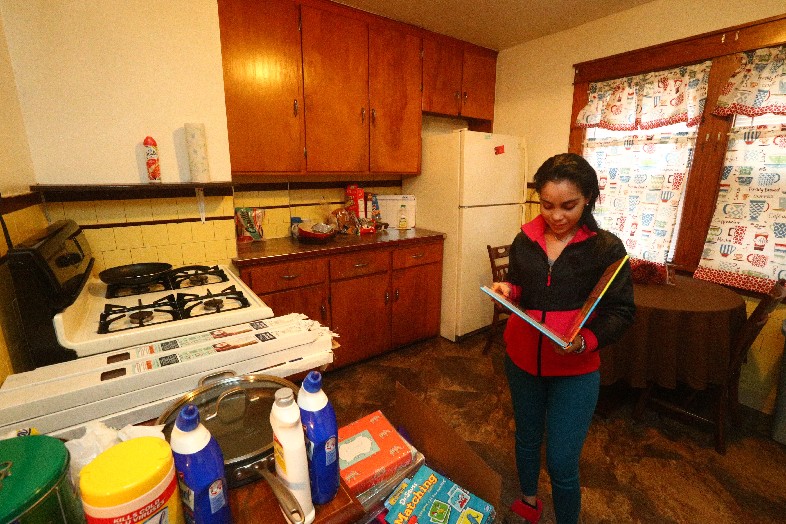 Elizabeth Marie Ortiz Olivencia admires some of the new children's books for her children, near furnishings in her kitchen provided by the Per Niente Club. (John Hickey/Buffalo News)

Di Leo and his pals remained close, even as adults. In the mid-2000s, he started producing a little newsletter that told some of their stories. For a title, he thought of a tireless friend who worked a second job as a contractor. The guy had a soft heart. He always gave people low estimates. If they needed extra work, he'd buy the paint and do it himself.

In the way you can kid around with someone you love, his friends said his company ought to be known as "Per Niente Construction."

In Italian, that means it's as if you work for nothing.

That was it. In his honor, Di Leo called the newsletter "Per Niente," which also became the name of their club.

The little journal turned into a vehicle for deeply personal and nostalgic accounts of family life on the West Side. Di Leo wrote some of the tales, some were submitted, and another friend – musician, actor and retired police officer Joey Giambra – agreed to serve as editor.

In the first year, it was two pages long.

Interest exploded. Before long, Di Leo and his club came up with an idea. They'd turn it into a magazine, and ask $40 for a subscription, and all the money would go toward a Christmas fund to help out families who needed the most.

"There's a lot of people out there who fall through the cracks,"  said Di Leo, whose family has lived in the same house in Buffalo for a half-century.

There are now 550 subscribers, many living in faraway parts of the country. That support gives Di Leo and his friends the leverage to purchase, say, a stove for a man in his 90s who'd been using a hot plate, in Tonawanda.

Every year, they buy 75 toys for children at the Buffalo Urban League's annual Christmas party.

Not long ago, they took a truck to a garage sale and emptied the place out, grabbing enough furniture to fill the home of a family from the Congo, a family with a mother and father who work as hard as anyone Di Leo's ever seen. 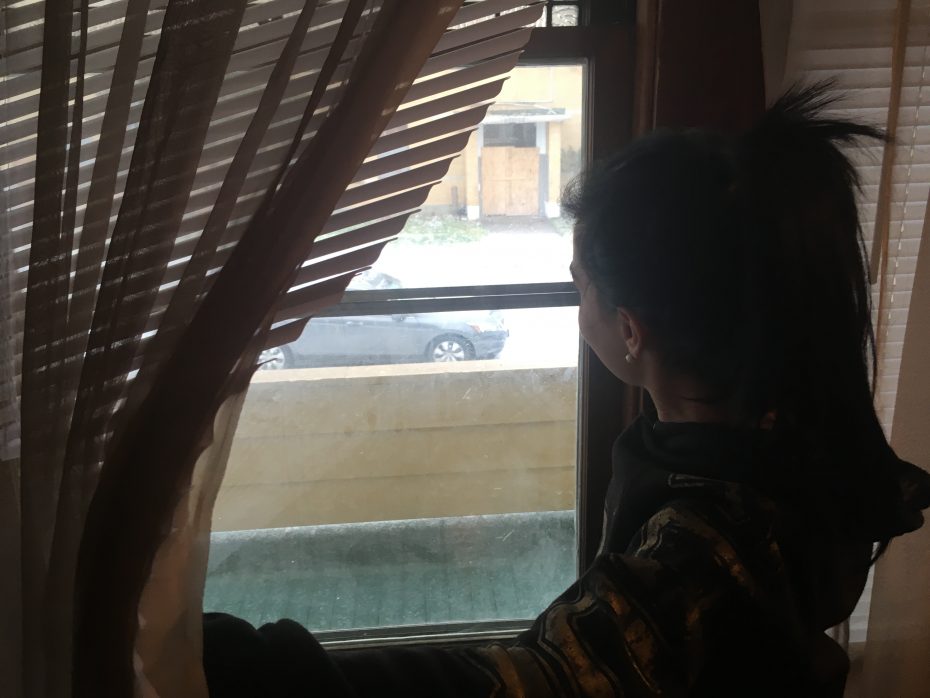 While Toni Marie, a retired school principal, laughs about how Di Leo's retirement was not much of a retirement at all, the truth is that she's as deep into the Per Niente cause as he is.

She's the one who will walk through an apartment before a family moves in and eyeball what is really needed. She often joins overwhelmed families on trips to buy new clothes at Walmart or Target, where she gets down on the floor to help 6-year-olds figure out whether their boots fit.

Among the connections Di Leo forged was a friendship with Casimiro Rodriguez Sr., president of the Hispanic Heritage Council of Western New York, an organization trying to comfort a stream of traumatized newcomers, displaced by the hurricane.

Di Leo asked if there were a couple of families that particularly needed help. Rodriguez suggested not only Francisco and Elizabeth but Raquel Ocasio Velez, who spent weeks here in a shelter after fleeing the aftermath of the hurricane with her mother and two children.

Within days, Raquel's family was at the store with the Di Leos, receiving boots, jackets and clothes.

"This has been amazing," said Rodriguez, who sees the Per Niente outreach as emblematic of a passionate community response.

He's involved with a Dec. 13 telethon on WIVB to aid local families hurt by the hurricane, and he said he's received offers of help from "countless people, from all areas."

As for Elizabeth, she and her children endured the hurricane alone in Puerto Rico, in their apartment.

"We cannot forget the sound of the wind," she said last week, speaking through Deborah Quinones, an interpreter and minister from Buffalo.

When it was over, Elizabeth emerged into a world where utility poles had been broken like twigs, a world without power, clean water or a working sewage system.

Elizabeth was raised by her father, who remains in Puerto Rico. She worries about him. He slept for weeks in his car after his home was wrecked. Like countless others, he's struggled with a sense of hopelessness, Elizabeth said. 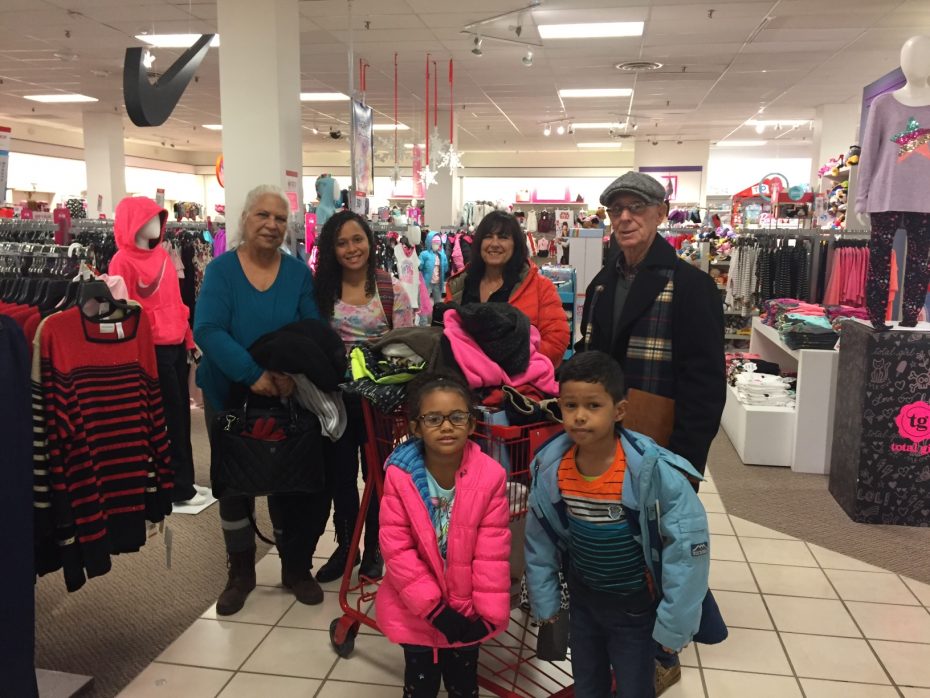 Joe and Toni Marie Di Leo (top row, right), on a shopping trip with the family of Raquel Ocasio Velez, who left Puerto Rico for Buffalo after the hurricane. Next to Raquel is her mother, Carmen Velez; with them are Raquel's children, Sara and Dylan. (Photo courtesy Joe Di Leo)

She and Francisco – a licensed truck driver who is trying, each day, to find a job – struggle to adequately describe their gratitude for Per Niente. After the Di Leos took a look at the apartment, they went out and bought a truckload of furniture, including a refrigerator and a washer and dryer.

The couple captured a video of their children, shouting with joy, on the day they came home to find warm beds and new toys and even a stack of books.

Elizabeth texted the video to Joe and Toni. They choked up when they saw it.

"That's the bonus," said Di Leo, who said he and his friends have a deeply personal motivation.

"Our parents and grandparents, when they came here, they didn't have much," he said. "They were the laborers. They spoke no English. They were the ones digging the ditches and laying the pavement, with all the same troubles and problems these people have. Now they're the lawyers and doctors and contractors, the ones building the city.

"With this couple, what gets to me, they're so thankful. They work hard, and they never want anything for themselves."

At the holidays, gift-giving has changed dramatically from what Di Leo remembers. Seventy  years ago or so, when he was small, his family had few possessions. He said he was grateful for a single present, as opposed to today, when "we've got so much you've got to stop and think about it when someone asks what you want."

Yet why is it, he asks, that those threadbare years of warmth and love and family loyalty – even in that time of few possessions, of scant money - define the essence of the holidays for the rest of your life?

In that way, Elizabeth and Francisco and their children offer Di Leo a great gift.

In their dreams, in their gratitude, they bring him back to Christmas.

Sean Kirst is a columnist with The Buffalo News. You can find more information here on the Per Niente club. Email Kirst at skirst@buffnews.com or read more of his work in this archive.