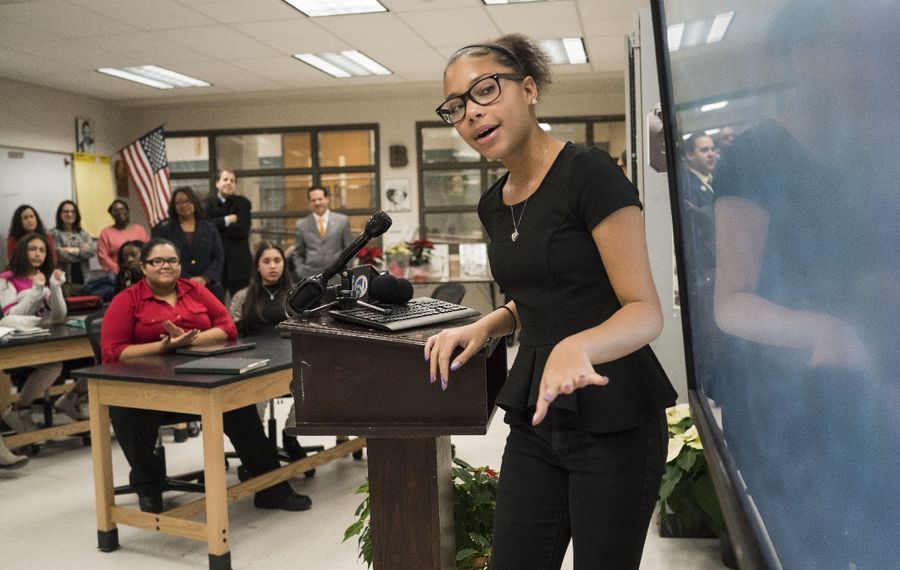 Rakim Scales thought about being a teacher when he taught a fellow student how to draw.

Lavonna Gaines was inspired by two teachers who gave her the help she needed.

And Gabrielle Baldwin credits her 4-year-old sister for steering her toward a future career in teaching.

“She inspires me the most,” said Gabrielle, 14, “just by the excitement on her face when she learns.”

The three are among the inaugural class at the new Urban Teacher Academy at McKinley High School, and while still young – they're all  freshmen – they offer hope for diversifying the future teaching ranks in the Buffalo Public Schools.

Rakim, Lavonna and Gabrielle are African-American. One of their classmates is from Nepal, another from Bangladesh. Others are from Burma, Kenya, South Africa and Puerto Rico.

“Basically, the focus the first year is to get them into the field of education and understand the fundamentals,” said Felice Brandy, who teaches the program.

The Urban Teacher Academy, launched in September with 18 freshmen, is a joint initiative of the school district, the Buffalo Teachers Federation and SUNY Buffalo State to address the lack of teacher diversity by using incentives to recruit high school students to the profession.

Teacher diversity has long been an issue for Buffalo, where two-thirds of the students are either black or Latino, but 87 percent of their teachers are white.

A growing chorus of educators – both in Buffalo and elsewhere – reaffirms that minority teachers may better understand the cultural and racial backgrounds students bring into the classroom, which can lead to improved academic performance among minorities, as well as a decrease in suspensions and dropout rates.

Students in the Urban Teacher Academy will get field experience in Buffalo classrooms and be matched with a mentor working in the school system.

Buffalo looks to own students to diversify teaching force

Those students who graduate high school and decide to become teachers can earn up to 12 college credits and will receive a full-tuition scholarship to Buffalo State, along with financial assistance for room and board.

Upon graduating from college, the students will get preference for jobs in the district, as long as they commit to working in the city schools for at least five years.

Officials from the school district and college dropped by the class Thursday to see how things were going.

“So far we’ve been learning about identity, which is how to know a person not based on stereotypes, but by how you get to know them," said Rakim, 15. “Having that personal connection is what really helps that student learn."

Brandy can relate to her students. She is a product of the Buffalo Public Schools, too.

Lavonna, 15, wants to teach, but isn’t sure what subject.

She loves math, thanks to her sixth-grade teacher, Ms. Munoz, back in Antioch, Calif. She helped Lavonna with her dyslexia.

“I was reading numbers backwards,” Lavonna said, “so it was hard for me to do math, but I really put my mind to it and stuck to it. Now, I’m really good at, like, algebra and geometry."

But Lavonna also might want to teach English, thanks to her eighth-grade teacher at Houghton Academy, Mr. Vincent.

“I just love the way he taught,” Lavonna said. “It wasn’t just straight bookwork and papers. He actually gave us stories, summarized the paragraphs and made us actually understand. It helped me a lot.”

Rakim, meanwhile, said he thought seriously about being an art teacher that day in sixth grade when he was drawing three-dimensional figures while riding the school bus. 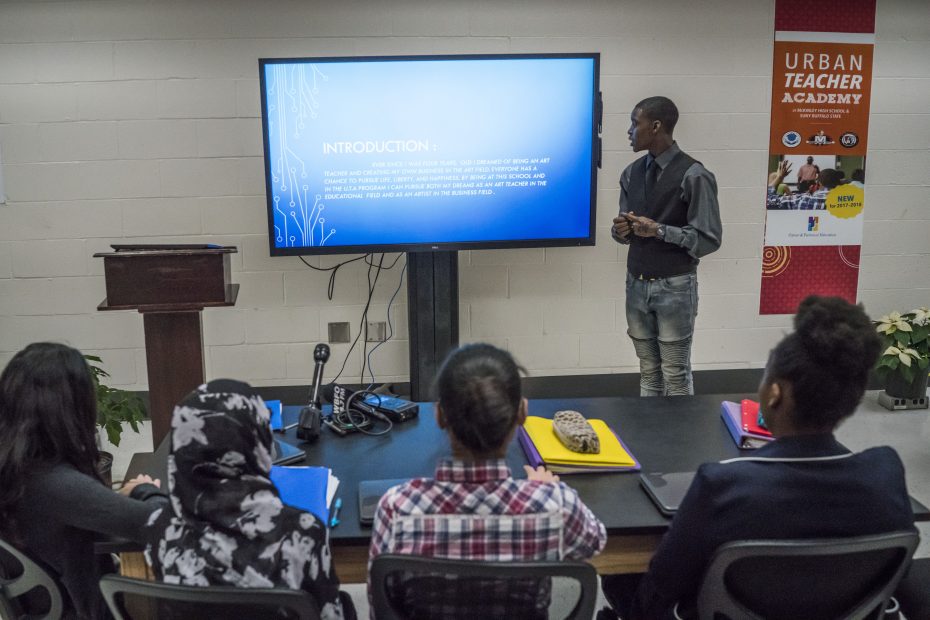 Another student took an interest and Rakim showed him how it was done.

“I thought, ‘If I can teach him art, I can teach someone else,’ ” Rakim recalled on Thursday.

While searching for a high school, Rakim came across the Urban Teacher Academy at McKinley.

He knew that was the program for him.

Who knows how many of the students ultimately will end up teaching.

Not all of them are are 100 percent sold on the profession, Brandy said, but they’re considering it.

“Someone recommended me for the program,” Gabrielle acknowledged. “It wasn’t my first decision, but I was thinking, ‘Maybe I’ll like it.’ ”