“I had the reel turned the wrong way,” said Joe Yaeger of East Amherst. It was to be the first of a long list of excuses this week as we playfully took jabs at one another while drifting the Salmon River in Oswego County with Capt. Mark Sabia of Northwoods Outfitters (www.northwoodsoutfitters.net). Maybe we should have been singing “No Excuses” by Alice in Chains.

It started with an invitation from Bill Clark of New Jersey, part of a marketing/fishing team working together to show off Lazy Larry’s EZ-Beads (www.lazylarrys.com), a simple idea that is not-so-simple to make. These beads have a split in them, giving you the option for easy-on and easy-off for changing purposes. Collaborating with bead inventor Larry Fiori of Maine and Sabia of Altmar, the angling trio extended an invitation during the Greater Niagara River Fishing and Outdoor Expo the last several years. It finally worked out.

The weather forecast appeared perfect. We met Clark at their home base, All Seasons Sports in Pulaski, at 7 a.m. After hellos,  we were off to grab two 17-foot Hyde drift boats. As we launched from the Altmar North access point, we noticed some brisk activity for a Monday morning. Launching the boat was only the first step in the process. They would then transport the vehicle with trailer to our final destination at Pineville, 4 miles away.

As we waited for them to return, a nice steelhead was being battled by a Hagerstown, Md., angler at the ramp. We were getting excited. Let’s go.

Submissions can be emailed to outdoors@buffnews.com and should include name, hometown and particulars of the catch. One photo will be selected as Catch and the Week and be pub…

Making our way downriver, our first stop was the tail end of the Schoolhouse Hole. “We’ll be float fishing with beads down this shoreline current,” said Sabia. He handed us each a 10-1/2-foot Cortland Pro Cast noodle rod paired with a Pflueger Trion spinning reel loaded with 10-pound test Sufix Promix monofilament line. At the business end was a 6-pound test Drennen fluorocarbon leader (12 to 18 inches long) ending with a Lazy Larry’s bead and No. 8 Blackbird hook about 2 fingers apart. Along the bottom of the line was a Raven 6.2 gram float and 6 grams worth of split shots ranging in size from dust to BB in descending order from the float. The float would be up high enough to allow the bead to be suspended within a foot of the bottom.

“I had too much slack line out,”  Yaeger said as the float went under and he was slow to react. Casting out a short distance to hit the drift was simple enough. Keeping your float straight up required a little bit of concentration, but with the sun shimmering off the surface of the picturesque river, it would be difficult to see at times. “I lost the float in the sun.” 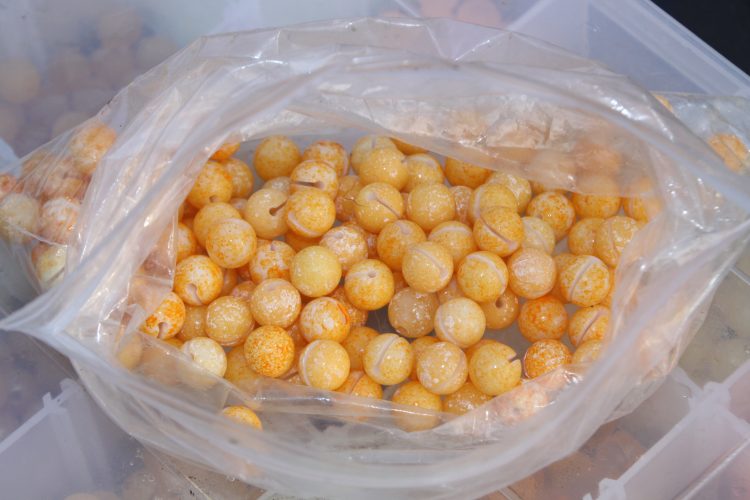 Lazy Larry's EZ Bead technology has a split in each bead for easy on and off removal.

On the other side of the river, two shore fishermen were bottom bouncing with egg sacs. We saw them hook up at least three times each but only one made it to the net. Something was up.

Fiori, in the other boat, shouted out “fish on” to our group and spent the next 15 minutes battling a trophy steelhead. It finally came to the net and rather than take a chance that the fish wasn’t ready to be released, he hooked up a fish grip attached to a rope and let him become acclimated to the water again. “This one came on a 7 mm glow roe bead,” said Fiori. We had been using 10 mm beads. Some quick adjustments were made. We must have been using the wrong size and the wrong color. Finding out what produces on any given day is always a work in progress.

As we looked around the river, we saw people fly fishing, center-pinning egg sacs, bottom bouncing and float fishing beads all within close proximity. It was also evident everyone was getting along – something great to see. Several other drift boat guides invited us in to share a fishing hole or two.

By noon, we were on a mission. Fiori and Clark pulled up anchor and headed down river to set up “camp” for lunch at the “trestle hole.” It used to be one of the top fishing spots in the area, but the ever-changing river was filling in this spot with more sediment – a natural bend in the river. There were still fish here, but not as many. However, the shoreline offered a smooth, flat area to set up a table, propane grill and a cooler. They heated up soup, browned up some chicken sausage patties and made sandwiches covered with provolone cheese and bruschetta. It warmed everyone up and refueled our engines for the final leg. No excuses here. 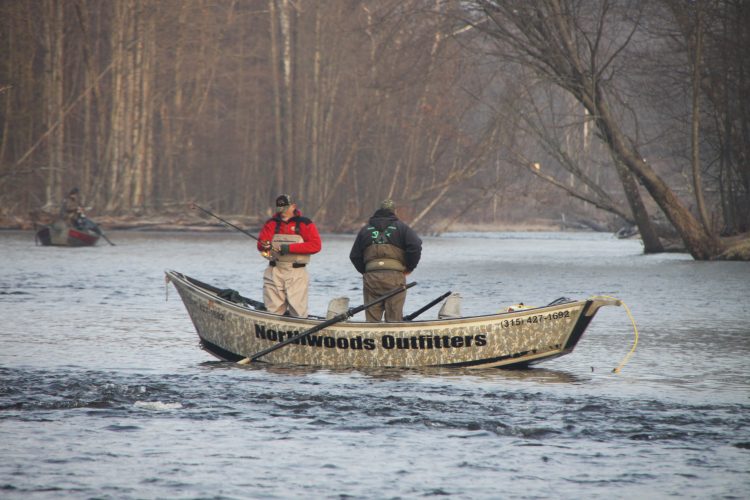 Clark and Fiori set up their gear along the Salmon River.

“It’s too nice out,” said Sabia, a 25-year veteran of fishing this spectacular river. “December is not supposed to be like this. The water needs to be a little colder.” This was after the salmon run but the start of the main steelhead action that will continue into May. Water temperatures hovered around the 40-degree mark. “A typical day on the river will see five or six fish hook-ups. However we have days that are much better than that.” Sabia moved to Altmar (he’s a mile from the Salmon River Fish Hatchery) from Connecticut because of the river and the fishing. Clark will be doing the same thing from New Jersey when he retires next year. The river is hypnotic, alluring, beckoning.

As we were heading out, enjoying the scenery and the tranquil setting, local guide Rich DeMong of Oswego stopped us. “Take a few casts here,” he said. “We’ve taken a couple from this hole.” We stopped and gave it a quick shot. He didn’t have to stop us. 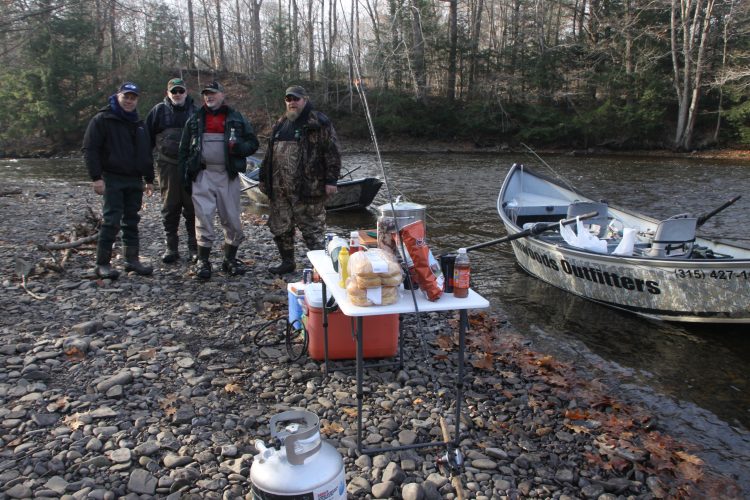 A typical day on the water includes lunch. Here's the crew for Monday (left to right) - Yaeger, Clark, Fiori and Sabia.

“I’m not used to this type of fishing,” said Yaeger as he missed another disappearing float. It was time to head back. One thing is for sure – a return trip to this special river is a must. If you’ve never fished the Salmon River, it should be on your bucket list. Going with a guide is a great way to take a lot of the guess work out of your first trip … but not the excuses. From shore, there is something like 17 miles to fish.

For more information on the Salmon River, check out www.visitoswegocounty.com. We fished the water flow at 450 cubic feet per second (CFS). To find out what the water flow is before visiting, call 800-452-1742 Access No. 365123 or go online at www.H2Oline.com. Water conditions also make for a great excuse.