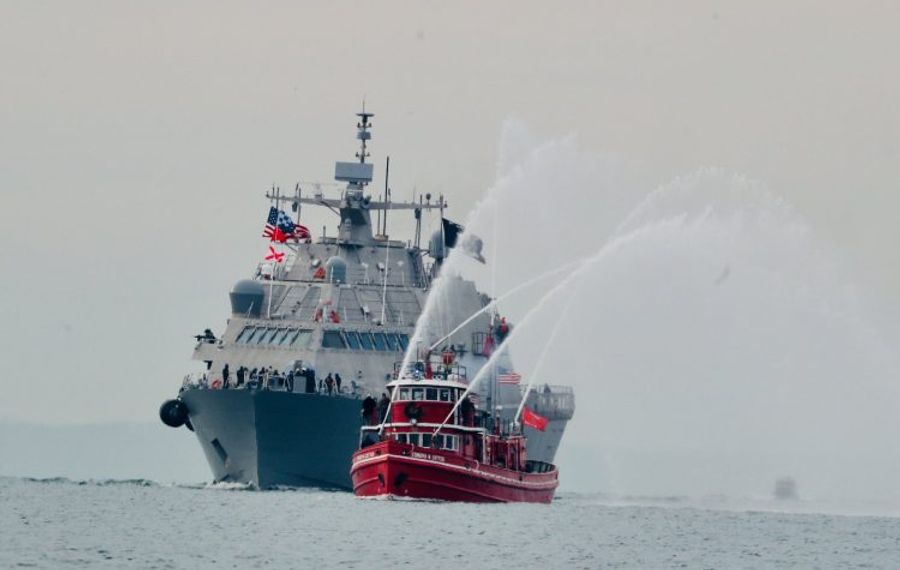 A rock song blared from the new USS Little Rock's public address system as it made its way to Canalside.

The rancorous lyric's of AC/DC's "Back in Black" filled the cold early December air on Monday as the ship the length of a football field approached Buffalo.

"We chose it because the motto of our ship is 'Back With A Vengeance,' said Little Rock Cmdr. Todd Peters. "It was intended to give the crowd a show. We want the crowd to remember the day the USS Little Rock arrived."

On board, the ship's crew performed a delicate dance.

Lake Erie and the Buffalo River appeared relatively calm, but the crew had currents and winds to deal with as the $440 million warship maneuvered its way to the pier.

"This is much more involved than parking a car," Peters said. "You have to anticipate everything, and you're not guaranteed a specific result. It takes time for a ship to react to a maneuver, unlike the more immediate result with a car."

The Buffalo Fire Department's Edward M. Cotter fireboat plied the waters ahead of the ship, sending up celebratory sprays of water from its nozzles. Approximately a dozen boats from federal and local police agencies provided a security escort, though the heavily armed warship was quite capable of defending itself.

Dozens of docents and well-wishers aboard the old USS Little Rock at the Buffalo & Erie County Naval and Military Park saluted and waved as the new Little Rock turned into the Buffalo River. Sailors at the bow of the new ship reciprocated.

"It was spine-tingling to watch the hand salute from the docents and the Navy rendering honors back," said William R. Barden, a vice chairman of the USS Little Rock Commissioning Committee. 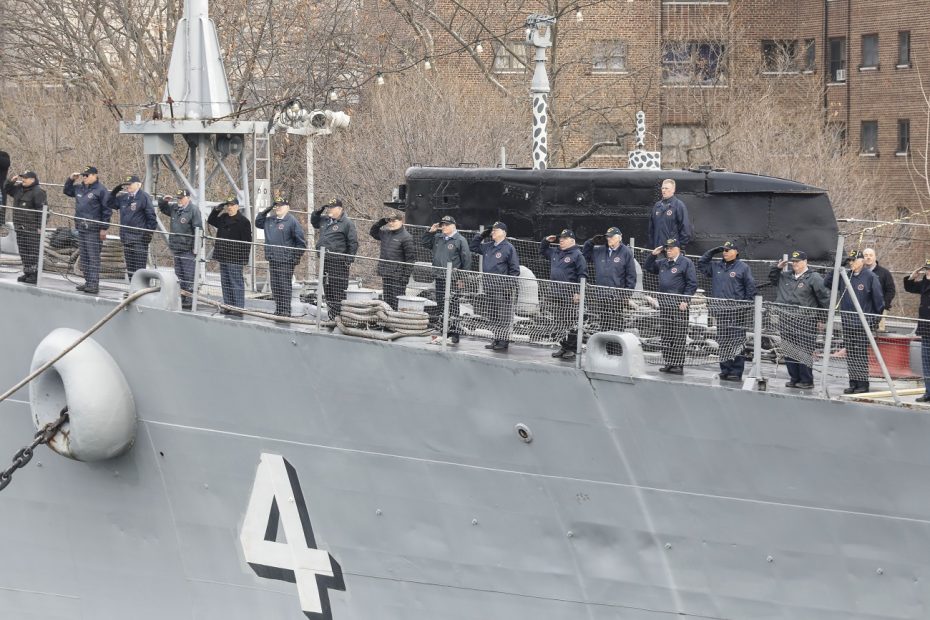 He watched it all unfold from a ringside view on the new ship's bridge.

Inside the ship's bridge — equipped with computerized navigation charts, multiple sensors and the reliable eyes of 11 crew members — the focus was on one task: a successful docking in the friendly yet unfamiliar waters of the Buffalo River.

When the operation was completed, Peters said the crew achieved "a near flawless mooring."

So began its two-week stay.

The highlight will be the ship's official commissioning at a ceremony set for 11 a.m. Dec. 16 at Canalside. An estimated 9,000 spectators are expected to witness what has never happened before in the Navy's 242-year existence — a ship's commissioning beside its decommissioned namesake.

"It's incredible to think that this is the first time in the Navy's history there's going to be a commissioning of a ship beside the one it is named for," Buffalo Mayor Byron W. Brown said. "What a tremendous honor for Buffalo."

Barden, along with several public officials, had been transported in a Coast Guard boat to the Little Rock several miles out on Lake Erie earlier Monday morning to board the ship and witness its arrival.

The ship can bolt at speeds of up 45 knots powered by four propulsion engines and cruise in waters as shallow as 13½ feet. It can be reconfigured for different combat missions, from dispatching unmanned crafts to destroy mines to delivering Navy seals for onshore attacks.

"It's impressive how this ship can go into warfare with such a small crew," said Erie County Executive Mark C. Poloncarz, among those on board the new Little Rock. "It may have the same name as the original Little Rock, but it's not the same ship."

The new Little Rock arrived here with a crew of some 72 sailors and officers. The old Little Rock's crew accommodated more than 1,400 crew members.

Air Force veteran Len Berowski, whose father and uncles served in the military during World War II, said he figured the arrival might be his best chance to be close to the new USS Little Rock during its time here.

"We think this is a pretty big deal to have an event like this take place here," the Cheektowaga resident said. 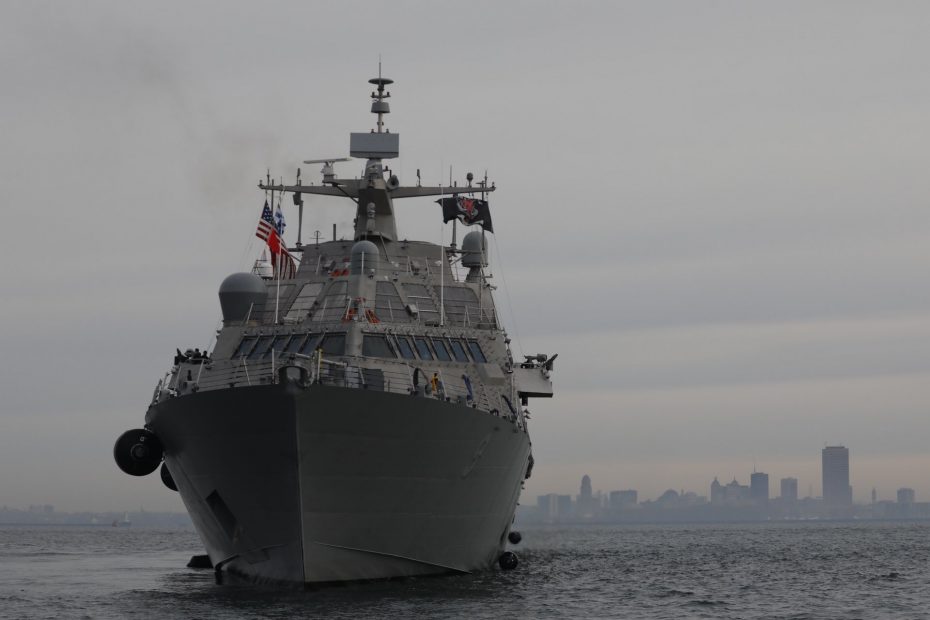 The Navy's new USS Little Rock in Lake Erie with the Buffalo skyline behind it on Monday, Dec. 4, 2017. (Derek Gee/Buffalo News)

Nearby, a group of seven members of the Daughters of the American Revolution handed out flags.

"To see the old ship kind of greeting the new one, it's a new day," said Deborah Lynn Williams, a resident of Buffalo's West Side and member of the DAR.

Paul Krehl, of Clarence Center, said he made up his mind to come to the waterfront when he was in his kayak on Sunday and watched crew members prepare the Edward M. Cotter for the Little Rock's arrival.

"It was worth the wait," he said, adding that he'll see the ship again because he was able to get four tickets to the commissioning.

Tom Harris, of Buffalo, said he came to welcome the Little Rock to town, as well as to honor veterans, particularly in the Navy, past and present. His father was a sailor in the Navy and Monday was the 27th anniversary of his death, Harris said.

"It's something you don't see every day, and that you're probably not going to see again," he said.

Other onlookers had military in their blood.

Denny Kendall, of Orchard Park, served 12-hour days in extremely hot temperatures below deck on the USS Rushmore during his four years in the Navy. His father served in the Navy in World War II.

"It gave me goosebumps," Kendall said of watching the USS Little Rock sail out of Lake Erie and make a turn into the Buffalo River.

Jim Hasburgh of the Town of Tonawanda was standing on the bow of the old USS Little Rock as the new ship sailed past. He served four years of active duty, mainly in the Mediterranean, and 20 years as a reservist.

Hasburgh marveled at the new ship, the way it's been crafted and what it's able to do, when compared to ships that he served on.

The ship's arrival looked like smooth sailing to spectators. Peters, the ship's commander, provided insights into what had to be taken into account as his crew steered the 387-foot-long warship into port.

The Little Rock made its way in from Lake Erie guided by computers and a running narrative provided by civilian Capt. Daniel Hobbs, a master mariner familiar with the local waters. He stood at Peters' side the whole time.

"There's what is known as the Venturi effect that has to be considered. It can create a vacuum and pull down the back end of the ship. That happens when you enter a narrow channel and the water pressure changes," Peters said, explaining hazards from the sharp turn into the Buffalo River from Lake Erie. "You also have the lake's currents pushing toward the Niagara River that have to be considered."

The wind also plays a role.

Though winds were blowing at only a few knots Monday morning, the new Little Rock's bottom is submerged a mere 13 feet below water, making it more susceptible to the wind.

"So not only are you steering to adjust for the currents, you also have to compensate for the wind," Peters said.

When the ship reached the Canalside pier, there was yet another challenge. The 57-foot-wide vessel's diesel engines that generate electricity have pairs of exhaust pipes on the port and starboard sides.

"If the exhausts are too close to the rubber bumpers along the side of the pier, the exhaust is so hot it could melt the rubber and cause a fire," said Command Master Chief Joe Reynolds, the ship's top enlisted man.

With the help of two tugboats gently pressing against the starboard side of the ship, the crew situated the exhaust pipes a safe distance from the bumpers. Several crew members also provided the muscle for attaching six, 3-inch diameter lines that were fastened to clamps along the pier.

From the Marinette, Wis., shipyard where the Little Rock was built, the ship traveled at speeds of about 8 to 10 knots an hour.

"We want to be able to get through the Welland Canal into Lake Ontario and further east into St. Lawrence Seaway without any problems," one of the crew members said of why the ship took its time after setting off last Friday for Buffalo.

Now that the ship is here, it's all about goodwill.

Crew members will be hosts for ship tours, visit area schoolchildren and attend Buffalo Bills and Buffalo Sabres games. There also will be dinners and receptions.

While the Little Rock's crew was intensely focused on making a flawless arrival, they later said Buffalo's warm welcome was heartening.

"It was overwhelming," said James Kocsis, the ship's navigator. "It made me feel really proud of what we're doing."