The players who practiced on the Buffalo Sabres' third and fourth lines Monday have combined for just 12 goals and 20 assists in 127 games. It's no wonder Buffalo is shaking things up.

The Sabres have recalled Evan Rodrigues and acquired Scott Wilson via trade, moves they hope will increase the production and tenacity among the bottom six forwards.

"I'm going to go out and work as hard as I can to start, and then from there I'll just let my talent work itself out," Rodrigues said Monday. "Just add some pace, add some work ethic, be hard on pucks and when the opportunity comes to showcase my offensive ability, I'll do that."

Rodrigues certainly earned the promotion from Rochester. He had five goals and 10 points in eight games with the Amerks, including three goals and an assist in the last two.

The 24-year-old was pushing to start the season in Buffalo before suffering a hand injury during the preseason. He returned to the ice Nov. 17.

"I knew once I got hurt I'd probably go down to Rochester," Rodrigues said in KeyBank Center. "I did everything I could to get back up here. I'm ecstatic to be back."

To make room for Rodrigues, the Sabres sent center Kyle Criscuolo to Rochester.

The last line will change with the arrival of Wilson from Detroit. Larsson has no goals and one assist in the last 16 games. Girgensons has nothing to show for his last 19. One will likely take a seat if Wilson makes it to Colorado in time for Tuesday's game against the Avalanche.

General Manager Jason Botterill sought someone he knows after watching the Sabres' holdovers fail to impress. Botterill was with Pittsburgh when the Penguins drafted Wilson in the seventh round in 2011, and the forward played parts of the last four seasons with the Penguins. 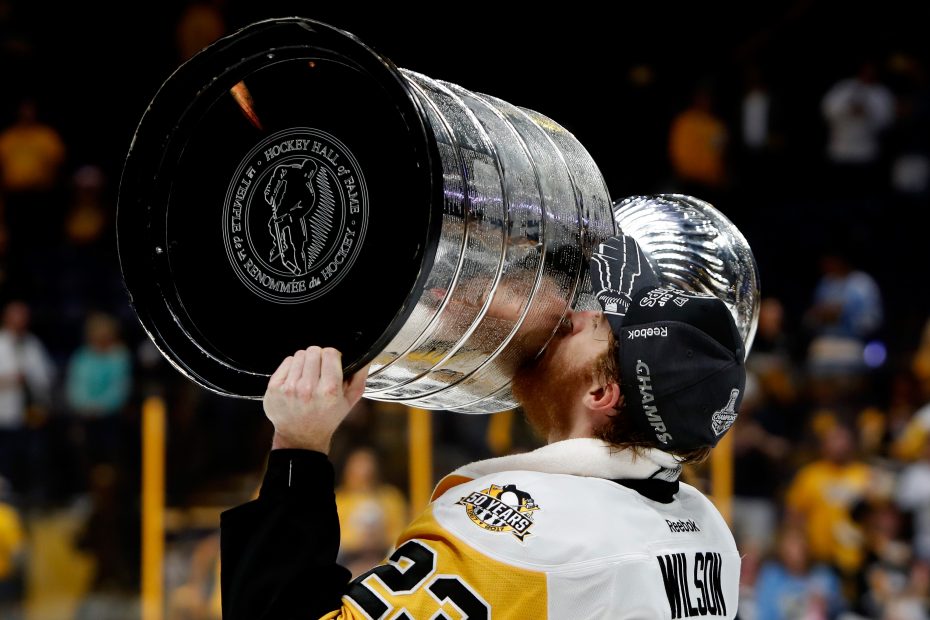 "We are very happy to add Scott to our roster," said Botterill, who gave the Red Wings a fifth-round pick in the 2019 NHL Draft. "Scott is a hard-working, young player that will be a great fit for our club. As a two-time Stanley Cup champion, his experience will be an asset both on and off the ice."

Wilson had eight goals and 26 points in 78 games for Pittsburgh last season, then added three goals and six points in 20 playoff games as the Penguins won the Cup.

The 25-year-old played three games for Pittsburgh this season before being traded to Detroit in a deal that featured Riley Sheahan heading to the Pens. Wilson has no points in 20 games this year. The 5-foot-11, 183-pounder has 13 goals and 32 points in 123 career games.

Phil Housley can't stop games whenever Buffalo makes a mistake, but the coach can blow plays dead during practice. He did it yet again Monday, summoning the players to center ice for a one-sided talk after a sloppy start.

"The position we're in, we should have a total commitment to our team game, our practices if we're going to move forward here," Housley said. "I just thought the execution was off."

The halting of practice has become common during Buffalo's 6-17-4 start to the season.

"We were doing a warm-up drill basically and just not putting the puck on the tape, missing passes," Okposo said. "We've just got to execute. That’s what happens in a game. It's little things, but they can't go on any longer."

Defenseman Nathan Beaulieu was absent with an illness and wasn't expected to fly with the team to Colorado. He left midway through Saturday's 5-1 loss to Pittsburgh.

"I don't believe he'll be on the team plane just to be cautious about the illness," Housley said.

Sabres prospects Ukko-Pekka Luukkonen and Vojtech Budik are one step closer to returning to Buffalo. They've been invited to world junior training camps.

Luukkonen was one of three goaltenders to make Finland's list. Budik will attend Czech Republic's camp.

Buffalo selected Luukkonen in the second round of this year's NHL Draft. The 18-year-old is playing in Finland's second league and has a .911 save percentage in 15 games played.

The Sabres picked Budik in the fifth round in 2016. The defenseman has five assists and six points in 27 games for Prince Albert of the Western Hockey League.

The world juniors will be held Dec. 26 to Jan. 5 in Buffalo.

It's been a summer spent across North America for Luukkonen