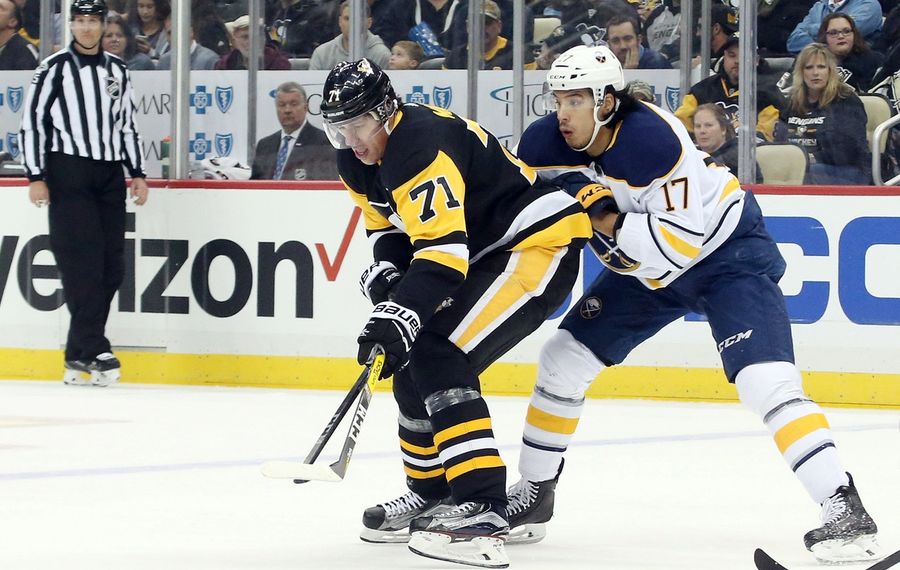 PITTSBURGH -- In the end, it was all about avoiding another shutout and not about winning a game.

The Buffalo Sabres finally got a goal here Saturday night by Jason Pominville as they narrowly avoided getting shut out for the fourth straight game. But the end of their inlglorious streak was about all they could hang their hat on from a 5-1 loss to the Pittsburgh Penguins in PPG Paints Arena.

The lone goal: Pominville took a backhand feed by Jack Eichel and slammed home a one-timer from the right circle at 11:18 of the third period to pull the Sabres within 3-1. It ended their franchise-record scoreless streak at 232 minutes, 9 seconds, which dated to Kyle Okposo's empty-net goal with 51 seconds left Nov. 24 against Edmonton.

In the net: Pittsburgh rookie Tristan Jarry nearly shut out the Sabres twice in two nights. He went 111:18 before giving up a goal to Buffalo.

Utter dominance: The Sabres have been swept in the season series by Pittsburgh in four of the last five years. The Penguins are 14-0-1 in their last 15 games against Buffalo.

Getting Buffaloed: The Sabres have dropped four straight and are 1-9-2 in their last 12 games. For the season, they are 6-17-4.

Opening the scoring: One goal is pretty much all you need against the Sabres these days and Evgeni Malkin took care of things for the Penguins with 1:16 left in the second period. The goal came on a 2-on-1 with Phil Kessel as Malkin beat Chad Johnson high to the glove side. It was Malkin's eighth goal of the season and first after returning to the lineup Friday following a four-game absence due to an upper-body injury.

Holding court: Carl Hagelin made it 2-0 at 5:36, holding-holding-holding the puck as he curled near the goal and finally firing it over a prone Johnson. The Penguins stripped the puck from Nathan Beaulieu behind the net, and Hagelin got behind both Josh Gorges and Sam Reinhart.

Roll the Highlight Film: Patric Hornqvist's goal with exactly one minute left in the second was the prettiest of the night, as Sidney Crosby undressed Jack Eichel in the slot and fed Hornqvist for a tap-in after Rasmus Ristolainen dropped coverage on the Pittsburgh winger.

Wrapping it up: Kessel made it 4-1 at 13;14 of the third, beating Johnson with a laser to the short side. Crosby scored into the empty net with 1:02 left.

No power: The Sabres were 0 for 4 on the power play -- extending their drought with the man advantage to 0 for 26 over the last nine games. The Sabres haven't scored a power play goal since Nov. 14, when they connected twice against the Penguins in their first meeting of the season. The Penguins rallied from a 3-1 deficit to win that game in overtime, 5-4.

Feistiness: As the second game in two nights between the teams, this matchup had a lot more edge than Friday's opener. Evander Kane drilled Hornqvist just after the opening faceoff. Bogosian was willing to take on Pens tough guy Ryan Reaves in a scrap, even though he absorbed some good shots.

Crosby and Rasmus Ristolainen had a spirited exchange for several seconds, which ended with the Pens' captain giving the Buffalo defenseman a shove into the bench. In the second period, Malkin and Benoit Pouliot took multiple shots at each other and landed high sticking penalties.

Unhappy anniversary: The game was played on the 48th anniversary of the Sabres being awarded an expansion franchise. On Dec. 2, 1969, the NHL announced Buffalo and Vancouver would begin play in the 1970-71 season. Neither has won a Stanley Cup and they have combined to go 0-5 in Cup finals. The Sabres lost in 1975 and 1999 while the Canucks were defeated in 1982, 1994 and 2011.

Classy gesture: The Penguins will spend the season honoring those returning to the building who were part of last year's Stanley Cup championship team and Buffalo General Manager Jason Botterill got his salute here Saturday. During a first-period television timeout. clips of Botterill were shown on the jumbtron and he responded with a wave and a "thank you" to the applauding crowd. Botterill won three Cups with the Pens in an 11-year career.

Up Next: The Sabres headed home after the game and will take a CBA-mandated day off on Sunday. They'll practice Monday and then fly to Denver to open a three-game road trip Tuesday night against the Colorado Avalanche. The trip continues Friday in Chicago and wraps up next Sunday in St. Louis.