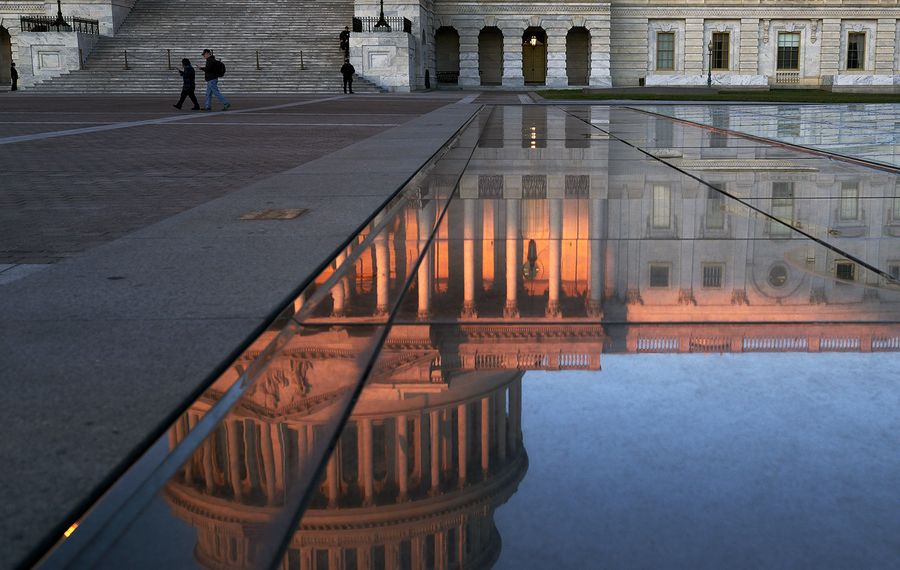 WASHINGTON — The U.S. Senate on Saturday delivered a sharp, if not totally devastating, blow to high-tax states such as New York.

The tax reform bill that Republicans passed while most Americans were sleeping would limit the state and local tax deduction to the first $10,000 of property taxes paid. That's exactly what the House version of tax reform would do, too, meaning it's highly likely that that provision will be in any final House-Senate tax compromise.

GOP Senate leaders initially proposed eliminating the deduction entirely. But then Sen. Susan Collins, a moderate Republican from Maine, insisted that the Senate preserve part of the so-called SALT deduction, just as the House bill does.

Reaction to the move varied from relief to anger to optimism, depending on the political persuasion and position of the person talking.

"If the state and local tax deduction were totally eliminated, it would almost guarantee that the vast majority of middle-income homeowners in Erie County would pay more in taxes," said Erie County Executive Mark Poloncarz, a Democrat.

Now, Poloncarz expects the change to have a more limited effect — and for many homeowners to not be immediately affected by the change in the SALT deduction.

That's because both the Senate and House versions of the tax bill nearly double the standard deduction. That means lower-income and many middle-income homeowners no longer will itemize their deductions and therefore won't have to worry that their prize deduction would now be limited to $10,000.

E.J. McMahon, founder and research director of the conservative Empire Center for Public Policy in Albany, agreed that the impact of the change on homeowners would be limited to those with especially expensive homes — particularly downstate, where home values are higher.

"It's going to unfold over time, in stages," McMahon said, "but very affluent suburban homeowners are going to get hit."

That includes those in Buffalo's fanciest suburban neighborhood. McMahon said they and their counterparts statewide will get hit in two ways: first with higher federal taxes and second with declining home values.

High-end homeowners will have to budget more of their income for federal taxes, which will leave them with less disposable income to spend if they decide to buy another home. That, McMahon said, will lead to a downward pressure on home values.

Still, that is far better than what could have been expected had Congress agreed to repeal the SALT deduction in its entirety. The PricewaterhouseCoopers accounting firm estimated earlier this year that if the deduction were eliminated, home values across the country could fall 10.2 percent.

That's why McMahon said: "Anything that limits the loss of SALT is better than nothing."

Still, Senate Minority Leader Charles E. Schumer, a New York Democrat, has likened the partial SALT deduction to chopping off four of your fingers instead of five.

“It’s clearer than ever that hard-working families and homeowners in upstate New York would be hammered by weakening the state and local tax deduction," he said. "The Senate GOP bill would raise taxes on three in five middle-class households nationally, according to the Tax Policy Center, with states like New York feeling the brunt of the costs."

Schumer agreed that the SALT reduction will hurt home values and said that Republicans should have worked with Democrats on a compromise tax plan instead of devising one that primarily helps corporations and the wealthiest Americans.

But Rep. Tom Reed, a Corning Republican who sits on the tax-writing Ways and Means Committee, said the partial SALT deduction would affect far fewer of his constituents than a complete repeal would have.

Including a full repeal in the tax bill could have endangered its final passage, as Republicans from high-tax states such as New York, New Jersey and California might have refused to vote for it.

"You would not get someone like me to support it," Reed said.

Calling  Collins' amendment to the Senate bill "a giant step in the right direction," Reed said a partial repeal of SALT may even be good for the state, because it could pressure the state government to trim the tax burden it places on the state's residents.

Gov. Andrew M. Cuomo couldn't disagree more. He has long warned that even trimming the deduction would threaten to push higher-income residents to move out of state to save money, thereby creating financial problems for the state government.

McMahon agreed that even the partial repeal of the SALT deduction would have severe long-term consequences for the state government, which relies heavily on taxes on the wealthy. Over time, he said, the limitation of that deduction will make it more expensive for wealthy families to live in New York, and could give affluent retirees a particularly strong case for leaving the state.

"It's not an immediate disaster," McMahon said, "but it's a huge long-term problem."

Cuomo continued his raging attacks on the GOP tax bill on Saturday.

"Their plan actually taxes the taxes that New York families pay," Cuomo told reporters in New York before a flight to Puerto Rico. "This, from the party that says they want to reduce taxation. They're actually coming up with the first double taxation in history, and it's aimed at Democratic states. So that takes a tremendous toll on the state of New York."

Cuomo said in a statement that the four House Republicans from New York who supported the GOP tax bill — including Reed and Rep. Chris Collins of Clarence — "betrayed their constituents."

For his part, Collins said Cuomo needs to take responsibility for the state's high taxes and do something about them.

“New York State is the highest-taxed, most-regulated, least-business-friendly state in the nation, with more than enough fat to cut in the state budget," Collins said. "Gov. Cuomo has lied about the GOP tax reform bill instead of taking responsibility for running the great state of New York into the ground."

Collins said that contrary to Cuomo's promises of doom, the GOP reform plan would cut taxes for many of his constituents and unleash a new wave of growth in the American economy.

"Tax reform will unleash America’s competitiveness and bring jobs and profits back home, where they belong," he said.

Collins' namesake from Maine agreed that the tax bill will have great economic benefits, particularly now that it includes her amendment partially restoring the SALT deduction.

She called her amendment partially restoring the deduction "a critical provision that will provide much-needed tax relief for hard-working, middle-income families."