A Chautauqua County deer hunter was charged Thursday with second-degree manslaughter in connection with the fatal shooting of a Sherman woman who was walking her dogs in an accident that has captured national attention and shaken the small community.

Jadlowski surrendered to the Sheriff's Office and County Judge David W. Foley set bail at $50,000 cash or $100,000 property. Jadlowski posted bail and is due back in court Jan. 29.

Jadlowski told deputies he thought he saw a deer in a field when he fired a single shot from his pistol the day before Thanksgiving, according to law enforcement authorities. He said he heard a scream and immediately ran to the area about 200 yards away, where he discovered he had badly wounded Rosemary A. Billquist in a field 150 yards behind her house.

"I feel confident that justice will be served," Billquist's husband, Jamie Billquist, told The Buffalo News late Thursday. Billquist, who did not attend Thursday's arraignment, called the indictment on the manslaughter charge a positive development but said it is early in what will be a long and difficult process for him and his family.

Swanson said earlier this week that if criminal charges are brought against Jadlowski, they would be either second-degree manslaughter or criminally negligent homicide.

The difference between the charges "has to do with the mental state with which the killing takes place," said Luis Chiesa, a professor who teaches criminal law in the University at Buffalo School of Law.

"He is aware that his conduct creates ... risk," Chiesa explained. By contrast, criminally negligent homicide means the defendant wasn't aware that there was a risk of death.

The sentence for second-degree manslaughter is about triple that of criminally negligent homicide because, Chiesa said, "we believe that when people are aware that they may kill someone or may harm someone that awareness makes them more worthy of blame and condemnation."

Billquist's death on Nov. 22 left many mourning in Sherman -- a town of 1,800 residents about 75 miles south of Buffalo -- and made national news. She was known for running marathons, volunteering at a hospice and donating a bench outside the hospital where she worked, so patients waiting for rides would have a place to sit. 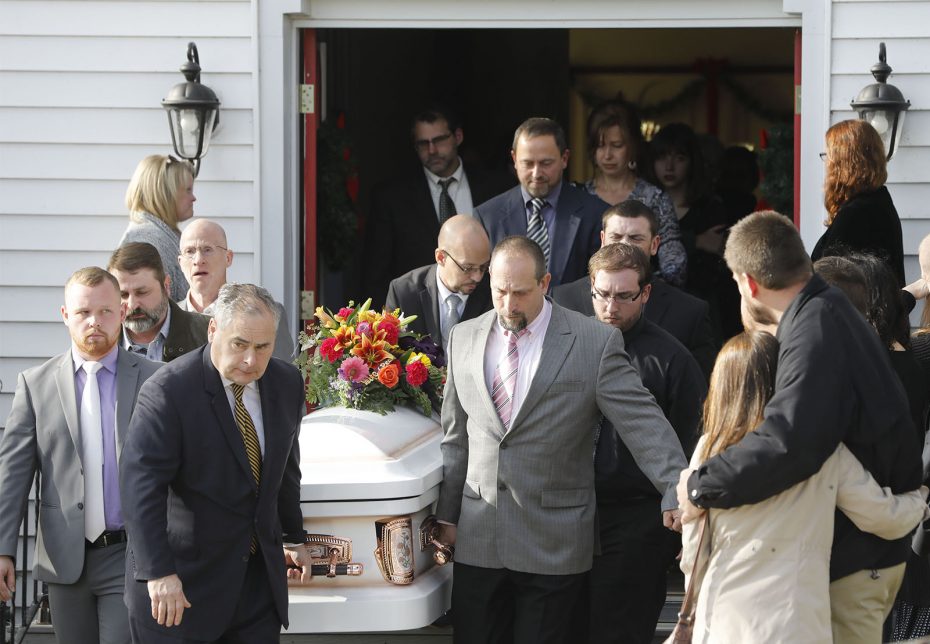 Mourners console each other as pallbearers carry the casket of Rosemary A. Billquist, 43, who was shot by a hunter who mistook her for a deer as she was walking her dogs after sunset last week, out of the Community Church in Sherman following her funeral services Wednesday. (Derek Gee/Buffalo News)

"It's a small town, and they're struggling right now," Swanson, who was acquainted with both Billquist and Jadlowski, said at a news conference held Thursday afternoon at the county's emergency services building that drew a large number of media outlets from Buffalo and beyond.

Jadlowski, who lived two miles from Billquist, fired the shot at about 5:20 p.m. It is illegal for hunters to hunt after sunset, which occurred at 4:46 p.m. that day.

'It's such a tragedy': Hundreds attend funeral of woman shot by hunter

Captain Frank Lauricella, the chief environmental conservation officer for the state Department of Environmental Conservation in the region, on Thursday called Billquist's death a "preventable" tragedy. He said all hunters need to obey laws that bar hunting after dark and that require them to fully identify their targets.

"Once the projectile pellets leave the barrel, you cannot call them back," Lauricella said.

Billquist's husband, Jamie Billquist, told The News last week that his wife was on the property of their next-door neighbor when she was shot. He said that Jadlowski didn't have permission to be hunting on the neighbor's property.

A grieving Billquist Thursday evening urged hunters to take a few extra seconds to know what they're aiming at and what's around them.

"If anything positive comes out of this, I want people to please just be safe," he said.