100 Acres isn't just another restaurant. The path to its door winds through the foothills of the SUNY Buffalo State campus, heading toward the towering double-spired edifice of the Richardson Olmsted Campus (the former Buffalo State Asylum for the Insane). The mountain range of red sandstone along Forest Avenue has loomed in my imagination since I first gasped at its soaring Romanesque hulk from a passing car, as it was seared into my teen-aged brain as all-purpose horror movie set.

As an adult, it was a source of lingering shame, an indictment of Buffalo's inability to properly exploit its architectural riches. Then $100 million in state and private money was poured into the complex, leading to the 2016 opening of Hotel Henry. The towers are alive for the first time in my memory. So even before I opened the door, the warm glow of civic pride felt like getting my first cocktail on the house.

We were seated at a large, rustic table made from reclaimed wood, located in a corridor. A broad, well-appointed corridor, but still a thoroughfare for suitcase-wheeling hotel guests. High ceilings swallowed noise, but the table was lit with an impersonal glare. Fortunately, the food put me in a more forgiving mood.

Ask for bread ($4) and what arrives is a warm, crusty loaf that crackles when you cut slices. The first hearty piece, slathered with the proffered scallion butter, immediately put me on bread alert. I could have eaten the entire loaf without stopping, not only rude but rendering me unfit for duty. 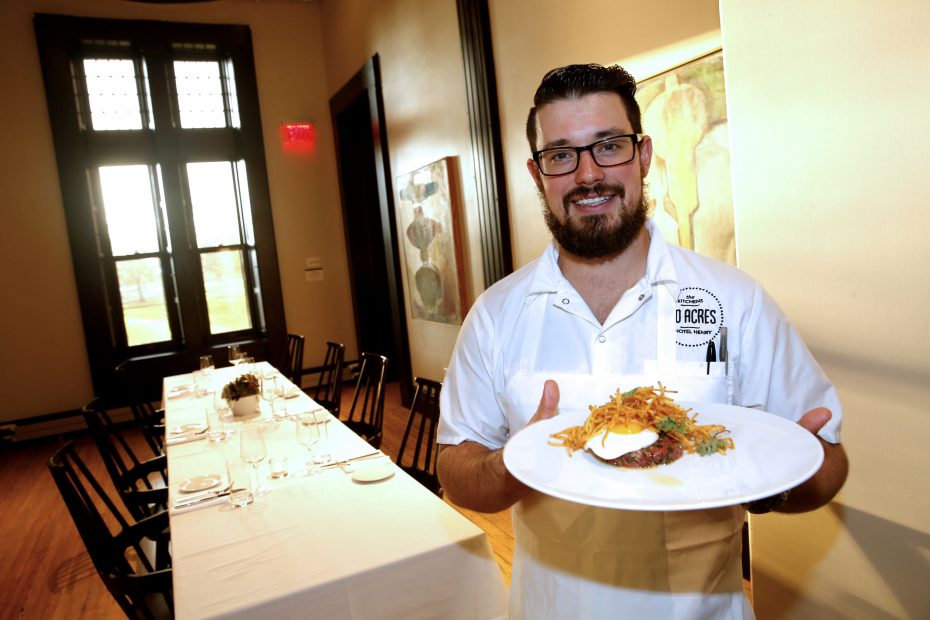 Beef tartare ($12) arrived topped with a gently cooked egg, buried in a thicket of fried potato strings. The yolk helped gloss tender bits of herbed beef, a flavorful combination. Warm goat cheese swirled with vivid Concord grape essence was a delicious fruit-and-cheese combination edged into must-order territory by puffy, fresh-baked flatbread ($12). We scooped the plate clean and made sure the bread didn't get cold.

Cauliflower risotto ($13) with toasted pine nuts, pea tendrils and green nuggets of cauliflower-like romanesco, was meekly flavored comfort food. Crab salad ($12) was boldly laid out, a disc of dressed crab with a thicket of frisee, green grape coins on a broad swath of black garlic puree. Its flavor was meek, leaving me searching for more sweet crab character.

Gathering clouds of disappointment were blown away by 100 Acres' burger ($17). Its pillowy brioche bun, griddled to a crisp, cemented my opinion that baking is a strength of this kitchen.  Cheddar overflowed the juicy patty, bacon added smoke and salt, and candied onion marmalade sent the whole package into orbit with its sweet umami punch.

Cracked skin-on potatoes, fried to a golden crunch, made me forget about fries as we dunked them in a sour cream and onion dip that seemed like a nod to Buffalo's favorite Bison flavor.

Those potatoes made a welcome return alongside the strip steak entrée ($32), mixed with peanut-sized pieces of roasted carrots that made me wonder if there were any adult carrots in the kitchen. It was sauced with a salsa verde whose green cast was more vivid than its flavor. The steak was tender enough but delivered medium instead of medium-rare. 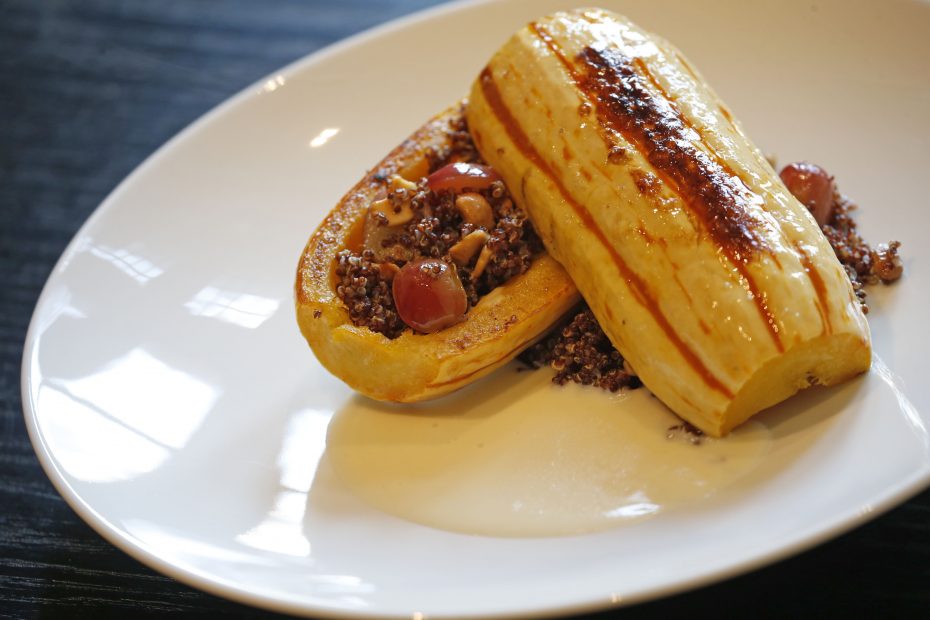 Delicata squash ($18) was roasted until it was sweet and tender in its skin, and perched on a mound of quinoa, with cashews for crunch. Swaddled in velvety coconut cream, it was a successful vegan entrée that would make any table happy as a vegetable share plate.

Seafood in chorizo broth ($29) got full marks for its delicately cooked scallops and halibut, though I would have appreciated a heftier piece of fish. Broth rendered orange with savory sausage fat was engagingly spicy, but I wished there was more. It's sad to have a lovely piece of grilled bread and nothing to dunk it in.

Duck breast was properly rare ($26) but its under-rendered skin was excessively flabby. I would have eagerly ordered the rest of the plate as a vegetarian dish, a ragout of lentils with gooseberries topped with a duck egg sporting an oozy yolk and crispy edges.

Cider braised pork with apples ($25) was a spot-on celebration of autumn, with fork-tender meat nestled amid precisely cooked skin-on apples and delicata squash. Celery stalk seemed an odd partner until its astringency heightened the sweet fruit tones throughout.

Dessert ($8) included a decadent chocolate pot de crème wearing a cloud of whipped cream and crunchy cocoa nibs, and a guilty pleasure bourbon milkshake, served with a maple cookie and peanut brittle. Cold rice pudding thick as mashed potatoes was pleasantly eggy. A pear caramel cake had me nodding until I got to the candied walnuts, which somehow tasted faintly of onions.

Its reasonably priced food could be polished more, and its space further tailored to dining, but 100 Acres' offerings already surpass most hotel dining in Buffalo. Surrounded by memories of the past, 100 Acres is another reason Buffalo diners have to be happy right now.