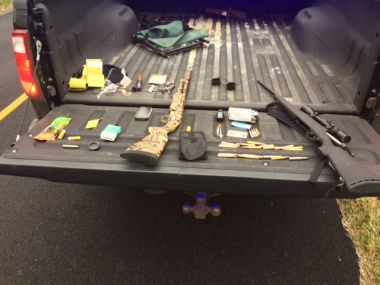 Something didn't seem right when a man told a pair of state environmental conservation officers and a state trooper that another man riding an ATV stole his deer in Royalton earlier this month.

As it turned out it wasn't, the state Department of Environmental Conservation reported Wednesday.

The man, whose name was not released, was found to have a shotgun and an illegal rifle with ammunition along with a woman's hunting license, four deer permits and other tags.

The complainant, turned suspect, told police the tags belonged to his girlfriend.

Officers also found the man had a used crack pipe, hypodermic needle and a small white substance suspected to be crack cocaine.

He was arrested and is scheduled to answer charges in Royalton Town Court.