The big news for Canalside in 2018 is the expected opening of Explore & More Children's Museum in December.

While that building takes shape, other projects now in the planning and design stages for Canalside are expected to make their debuts in 2019 and 2020.

"I am excited about all the work we are doing, and all the potential that we have," said Tom Dee, president of Erie Canal Harbor Development Corp. "It's all about continuing the dream of changing the face of Buffalo's waterfront. We're just in our infancy in terms of where we can go."

Two new buildings that will include permanent washrooms, shelter and programming space are expected to open in 2019 by the Commercial Slip. One will be at the western end of the Central Wharf, and the other near the naval museum.

A vintage carousel now being restored also is expected to open in summer 2019.

New buildings are expected to follow in 2020 near the canal along Marine Drive, and at the corner of Scott and Washington streets.

New signage, works of public art and an expansion of Clinton's Dish are also on tap.

The total cost for these Canalside projects is $41.5 million, with the bulk coming from $8.4 million received annually from New York Power Authority reallocation funds.

In addition, more than a dozen projects are in planning and design stages on the Outer Harbor with a combined price tag of $28 million.

The downtown children's museum is on its way.

The museum, which is being designed by Fontanese Folts Aubrecht Ernst Architects in Orchard Park, will have two entrances, including one from the Lake Street Bridge that will allow school groups to enter separately from daily visitors.

Steps from the bridge will lead to a foot path along the canal, where there will be a cafe and retail space.

Seven play zones will be spread across the museum's four floors. A two-story feature will be on the second floor, while the fourth floor will offer a rooftop terrace.

Explore & More Children's Museum is starting to take shape at Canalside. The opening is planned for December 2018. (Artist rendering)

The children's exhibits are being fabricated by Art Guild, an accomplished children's museum exhibit maker based in West Deptford, N.J.

So far, the museum has raised $12.5 million and received $9 million in state funds for the $29 million project, leaving $7.5 million to go.

"We're very excited," said Tina Zinter-Chahin, acting executive director. "We have continued momentum, and the campaign is strong. The impact we should be able to have on the minds of young children in Western New York is going to be amazing."

The footprint of Clinton's Dish and the nearby beer garden will more than double its current size for expanded seating.

"This is great for the public because people are cramped into this little space," said Dee. "This will open it up."

A food truck also may be added to the food options next summer.

The start of the 2018 summer season should see new directional and interpretive signs to make it easier to move in and around Canalside.

Off-site signs will help visitors find their way to the waterfront destination and to the Outer Harbor.

Area north of the canal

The waterfront agency is planning to ask developers to submit proposals for the 2-acre area north of the rink – currently a large hole in the ground – sometime during the second or third quarter of 2018, Dee said.

Mixed-use development, including housing, office, retail, food and entertainment, have been considered there. Response from developers will determine what the next steps will be.

A rare 1924 menagerie carousel is now expected to open in Canalside for the start of the 2019 summer season.

"[The carousel] should be the jewel on the Canalside crown," Gov. Andrew Cuomo said in October 2016 when announcing a $1.2 million challenge grant from the state.

The lavishly carved carousel will be solar-powered and housed in a building being designed by eco_logic Studio. The carousel will take up 7,056 square feet of space by Clinton's Dish, the children's sandbox and the Central Wharf. 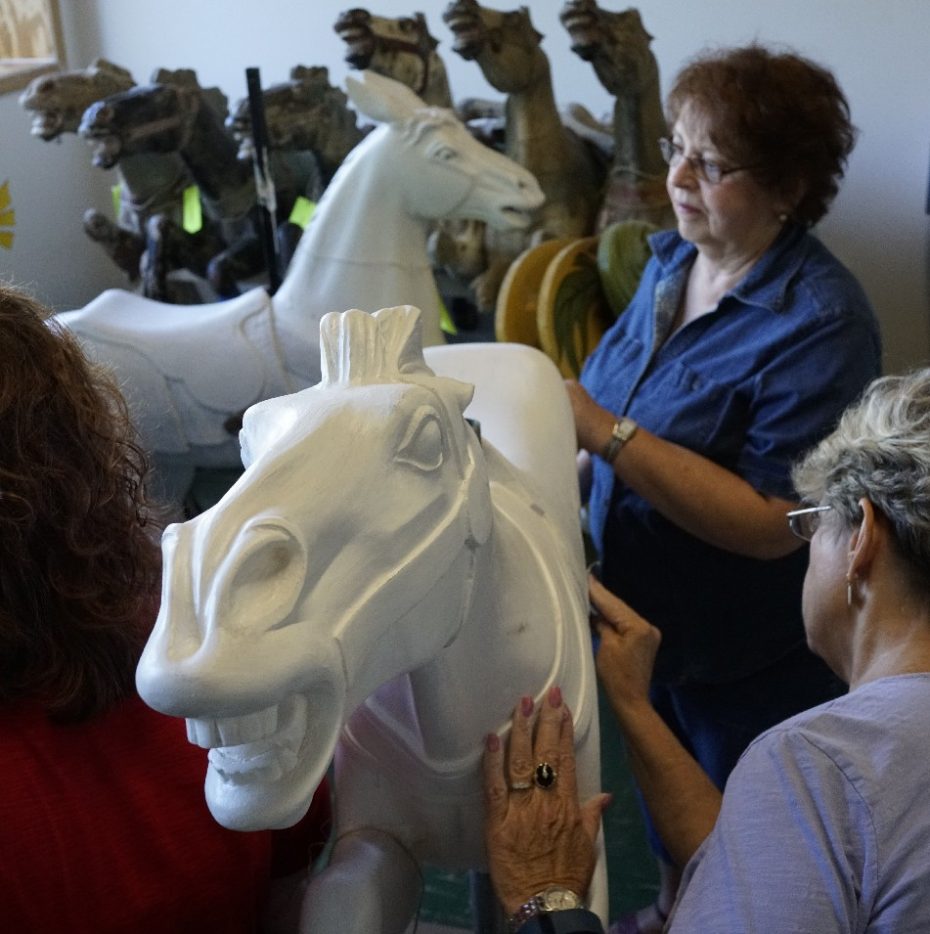 Volunteers from the Buffalo Snowbirds Decorative Painters sand down a coat of primer as they work to restore a horse from the vintage carousel that will be installed at Canalside in 2019. (Derek Gee/Buffalo News)

The carousel's new location also means it won't be necessary to move summer concerts from their present location, as previously announced. They still could move to an area where the new Pavilion will be, but Dee said that decision will be made later.

The carousel is expected to operate seven days a week, 11 a.m. to 7 p.m., from Memorial Day to Labor Day, with additional months of operation to be determined.

The not-for-profit Buffalo Heritage Carousel has raised $4 million of the $5.3 million fundraising goal, according to Corky Burger, campaign fundraising director. The fundraising goal includes a minimum endowment of $250,000 for operation and maintenance needs. 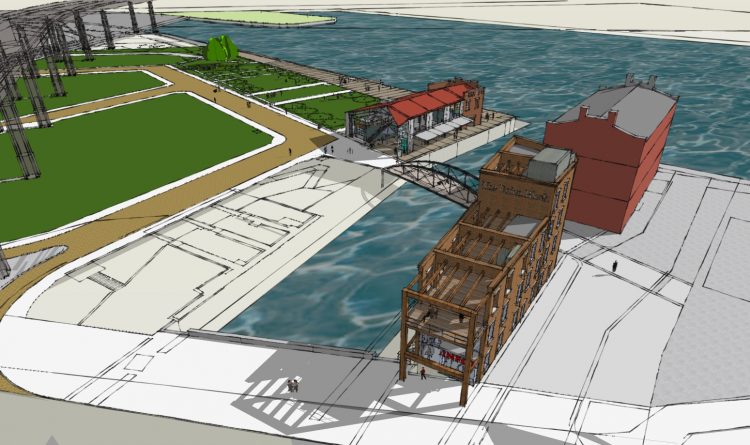 The Union Block building, seen in the foreground along the Commercial Slip, is expected to open at Canalside in 2019.

The building will be on the other side of the Whipple bridge from the Buffalo and Erie County Naval & Military Park, and on the same side of the Commercial Slip. The four-story building will have a 20-feet-high ceiling on the first level and occupy 1,300 square feet. The space will be used for public and private gatherings, an information booth, historical interpretive elements and seasonal programming.

The upper floor will contain an outdoor deck, with one-third of the space, including an elevator shaft, protected from rain. Small tables and chairs will be on the foot path by the building.

"The thought is to bracket the Commercial Slip and make this a lively place," Dee said, noting the proximity of the naval park, the Ruins and the idyllic Whipple bridge.

The Union Block is one of two buildings being designed by HHL Architects, whose resume includes the restoration of the Martin House Complex and Delaware North's new corporate headquarters.

The Pavilion also will be a historically themed structure located along the Commercial Slip at the western end of the Central Wharf. 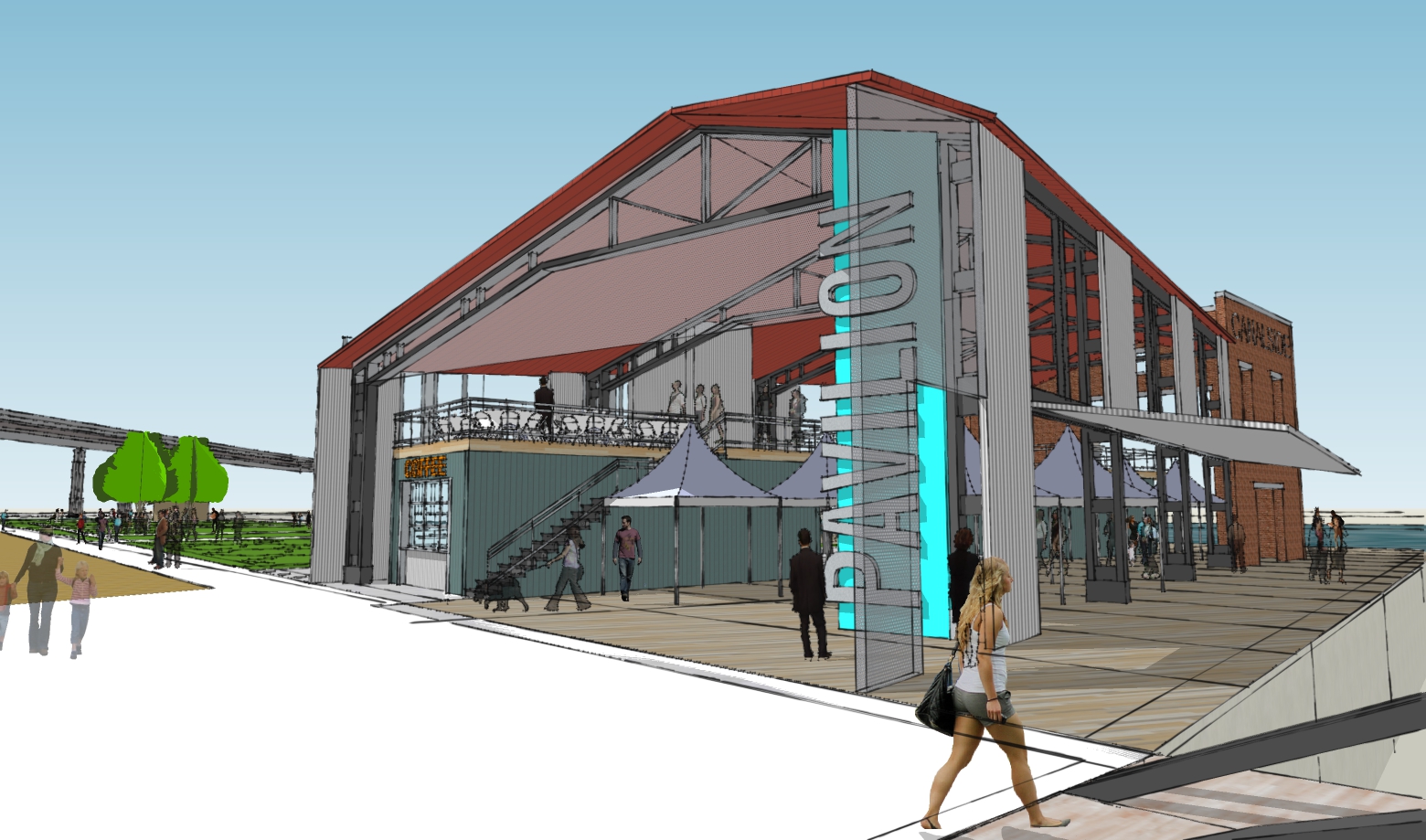 "We think we've designed two really great buildings that solve multiple problems," Dee said. "It also helps people with the number one complaint we get, which is protection from the sun."

A request for public art at Canalside with an emphasis on Buffalo artists is expected to be issued by mid-2018, in partnership with Albright-Knox Art Gallery. "Silent Poets" recently left, but "Shark Girl" remains a popular photo destination. 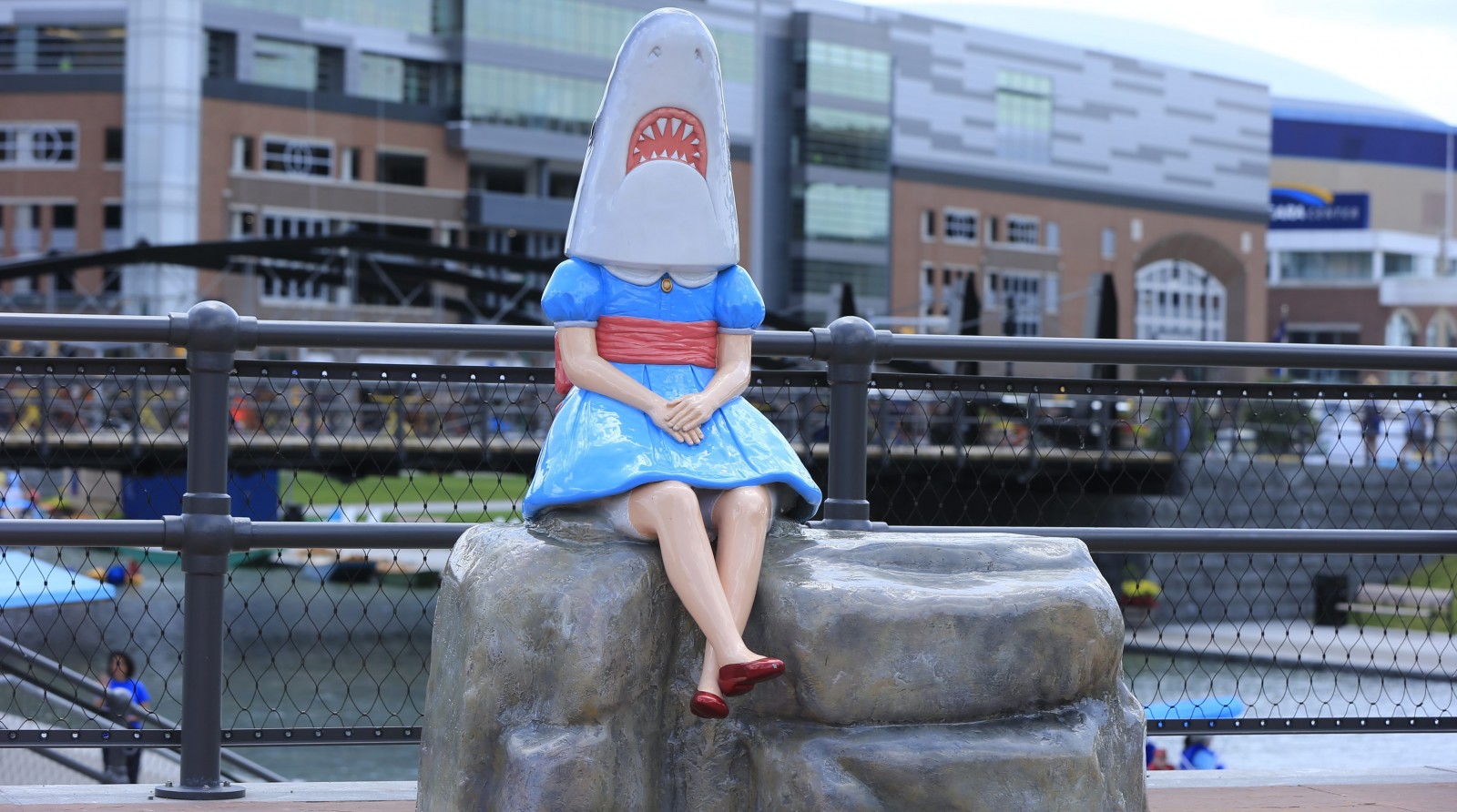 The state agency has set aside $1.2 million for public art over the next several years to enhance the waterfront.

Parcels by the rink

Multiple responses were received in the fall from developers interested in two parcels near the ice skating rink, according to Dee.

The parcels could be developed as one project or as two separate projects, he said.

Dee said the favored bid is expected to be announced and voted on at a January meeting of the board of directors. The start of construction, however, will probably have to be pushed back into 2019 due to construction of the nearby Explore & More.

A building with apartments and office space, and possibly restaurants below, is planned by Benderson Development at the corner of Washington and Scott streets. Benderson developed a nearby building with anchor tenant Courtyard Marriott.

Constructing the likely four- or five-story building, which would be across from (716) Food and Sport, has been stalled by the complexity involved in relocating underground electrical, water, gas and phone lines. But the work is now expected to get underway in early 2018 and take a year.

Constructing the building should take 12 to 18 months, Dee said, making a 2020 opening likely.