Sometimes things, like people, are made for each other.

That was apparent to Jeffrey Heckman, a Buffalo-born banker when he stayed at InnBuffalo off Elmwood in June.

Heckman was admiring the architecture in the basement of the 1898 Victorian house when co-owner Joseph Lettieri, in talking about how the house was intended to show off Buffalo's glorious past, mentioned photographs of a pool table that was once there. He also mentioned a photo rumored to show President Grover Cleveland playing on it.

Heckman, as if having an epiphany, suddenly offered Lettieri an antique pool table for the basement that he was going to put in storage.

Sure enough, Heckman, who lives downstate in a village in Westchester County, returned last month with a U-Haul toting the Brunswick-Balke-Collender Co. pool table to its new home at 619 Lafayette Ave.

"I used to consider myself a big booster of Buffalo – my office in New York City is a shrine to things Buffalo," Heckman said. "So when I stayed with Joe and Ellen, I was quickly disabused of the notion about being Mr. Buffalo. Joe, I will admit, has me beat hands down.

"I can't think of a better place for the table," he said. "It belongs in Buffalo, and it is my small way of helping Joe and Ellen succeed. It's important to me that they do ... The table is back home in the 14222 zip code, and in a small way so am I."

The pool table is believed to be from around 1890, when the pool rack was patented. Heckman hired Classic Cue Billiards in Depew to properly install the table, put on new felt and add a table cover.

"The support from the people who have touched this project has been overwhelming for us," said Lettieri, who bought the 11-bedroom house – once home to industrialist and inventor Herbert Hewett – with his wife, Ellen, at a city auction six years ago this month.

"Jeffrey's generosity went above and beyond anything we could have imagined," Lettieri said.

The pool table, he said, blended perfectly with the luxurious house designed by Capt. Williams Lansing, the supervising architect of the 1901 Pan-American Exposition, and the architect for the Connecticut Street Armory, Canisius College and Lafayette Presbyterian Church, across the street.

The pool table was purchased by Heckman's parents from a family on Auburn Avenue in 1961 for $150. Like Heckman, who lived on Lafayette as a young man, the table spent most of its years in Buffalo. It took up residence at five addresses in the 14222 zip code, before it was sent packing downstate a quarter-century ago. It was fully restored in 1996.

On a recent day, two guests at InnBuffalo skilled in billiards were invited to see and try out the pool table for themselves. Both came away praising the bed-and-breakfast's newest addition. 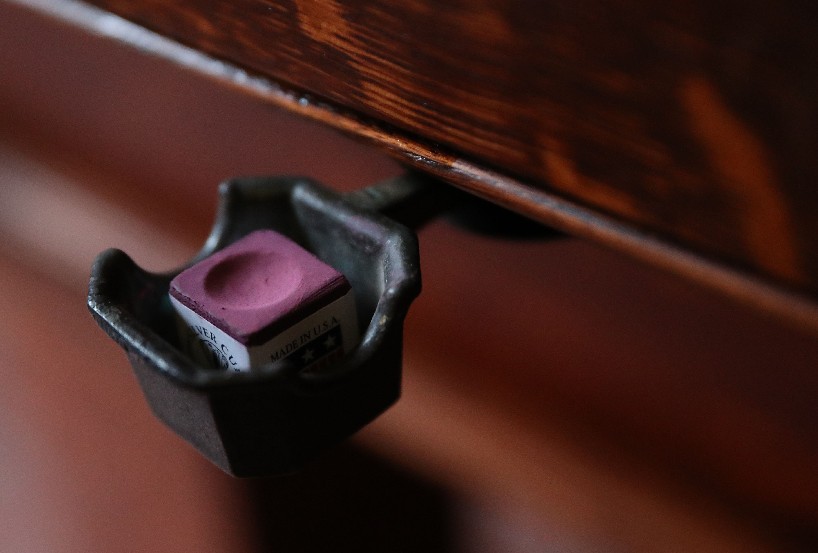 The cast-iron chalk holders indicate the pool table is from the 1890s, making it a perfect fit for  InnBuffalo off Elmwood, a restored Victorian house that once had its own table from that era. (Sharon Cantillon/Buffalo News)

Niemiec, who as a labor of love has made moldings and spindles and done other specialized interior work at InnBuffalo, exalted over the basement's oak walls, hand-painted tiles and custom ironwork.

"I go to tons of mansions," Niemiec said. "There's nothing like this."

The pool table, he said, was a perfect addition.

"It's quarter-sawn white oak, which is throughout the house," Niemiec said, noting both its rarity and expense. "It gives a smooth tiger pattern across the grain."

Niemiec pointed to other features, including cast-iron chalk holders that flip out from under the table, inlaid ivory and leather pockets that he said were all signs of the table being from around 1890.

He also couldn't help praising the Lettieris for their deliberate and painstaking restoration.

"Joe's the perfect guy for this project, along with Ellen, because of the love and the knowledge," Niemiec said. "He thrives to do the right thing with everything, and really takes the extra step."

"It's a beautiful table. It's ancient," DiLiberto said, estimating it to be more than 100 years old.

DiLiberto, 84, was inducted into the Greater Buffalo Sports Hall of Fame earlier this year for billiards and for boxing. He was managed by Muhammad Ali's trainer Angelo Dundee and was undefeated before retiring due to injuries.

He also liked how the table played, even if he wasn't always happy with his own play.

"I'm going to play the 9 ball in the corner," DiLiberto said.

The ball went in, but so, too, did the white cue ball.

"You sleep in the street if you knock in the white ball," DiLiberto said, exhibiting a flash of pool hall humor.