A fresh face on a rapidly transforming strip of Main Street, City Fare Café + Catering is dishing out a broad selection of hip breakfast and lunchtime bites.

Opening in mid-October, the location and decorum are a perfect complement to the cuisine that owner-chef Matthew Conroy is preparing fresh daily. It’s a squeaky clean and inviting environment with pops of elegant flair at each glance.

The ever-changing menu specials and selection of homemade pastries are scrolled out with care and wait patiently under the eclectic glassware that characterizes the charming bakery side of the restaurant.

This slice of pumpkin bread with a mascarpone swirl and fresh whipped cream ($3.25) was a wonderful match of sweet and savory, delicate and dense. 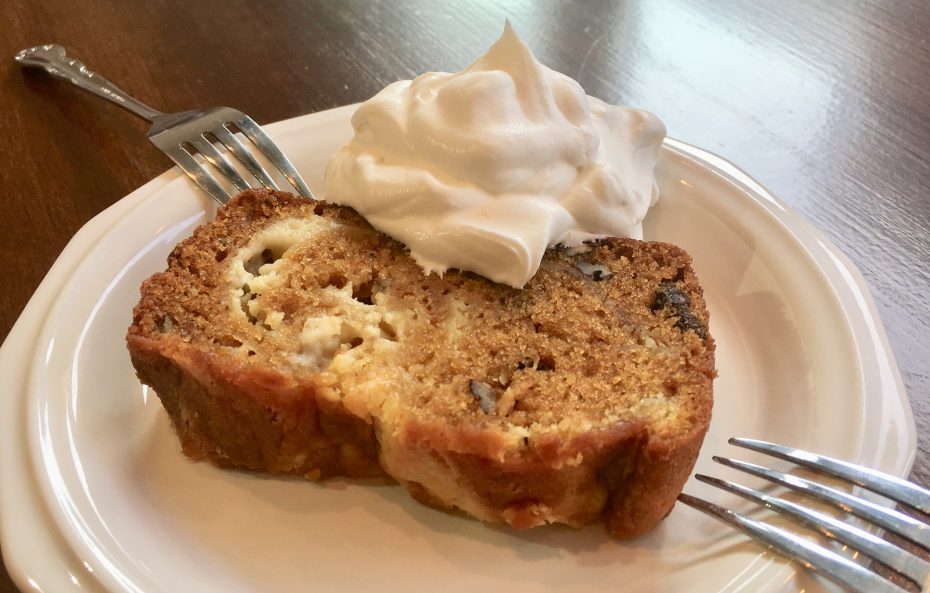 Pumpkin bread with mascarpone swirl, $3.25, and whipped cream that never saw the inside of a can. (Phil Wagner/Special to The News)

For $1 apiece, you could also tack on the daily specials of either coleslaw or potato salad. Both were a cool and crisp accompaniment to the hot and messy sandwich to follow, but the potato salad gets a gold seal from a self-admitted snob.

“Da Coach,” as the name alludes to, is a Chicago-style Italian beef sandwich. I’ve wanted to try one of these for years, but they’re a tough find in Western New York. You don’t think you’ll be able to eat it when it arrives…but you will, if only through sheer tyranny of will. 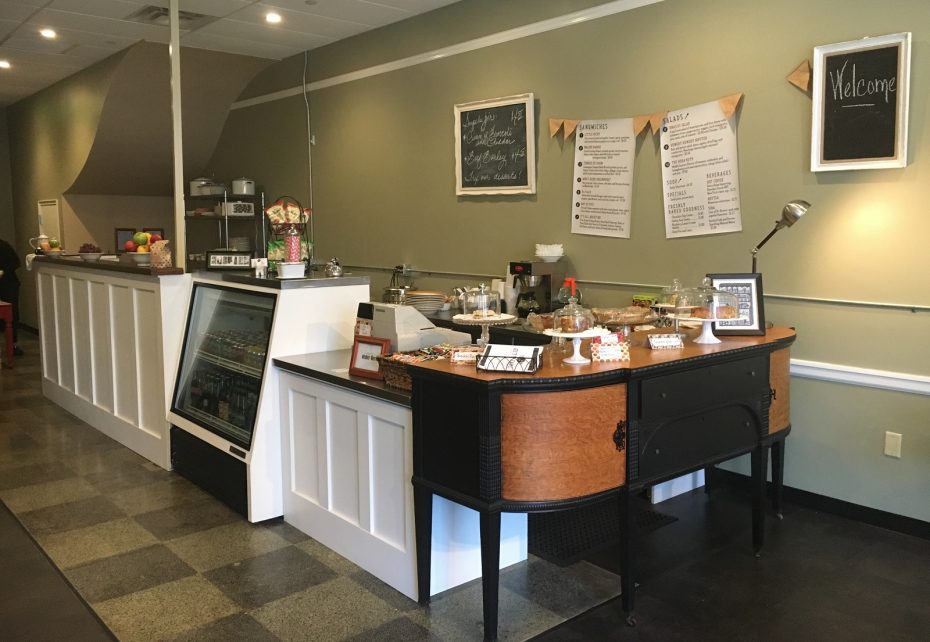 The chic and simple interior of the deli-bakery combo. (Phil Wagner/Special to The News)

The mountain of beef is pull-apart soft and the pepper-lined Luigi’s hard roll assures you’ll capture all its juices and the tangy spice of the crunchy Chicago-imported giardiniera. Well, most of it anyhow.

It’s one of the better sandwiches I’ve ever eaten, and at $9.50 it’s a steal with a hot side of au jus. But if you’re not carefully monitoring your stance, it might cost you a shirt in the process.

The “Hungry Hungry Hipster” with chicken ($10.50) is a stark contrast to Da Coach. A testament to the variety on the menu, this is one of the many options of lighter fare offered if you don’t feel like transitioning to a nap after lunch. It’s an artwork for the eyes and mouth. 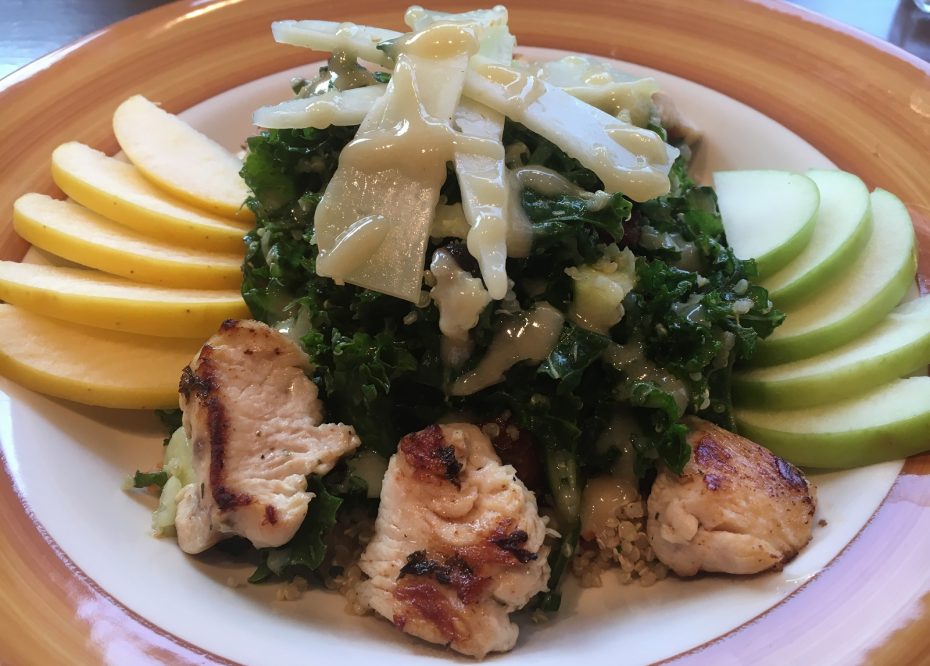 Hungry Hungry Hipster ($8.50) is a kale and quinoa salad, dates, apples, dried figs and cranberries, Manchego cheese and a maple-mustard vinaigrette. (Phil Wagner/Special to The News)

A crisp, cool kale and quinoa base supports a patchwork of dates, apples, dried figs and cranberries, topped with sharp Manchego cheese, grilled chicken and a maple-mustard vinaigrette that put Chef Conroy’s creativity and capability on proper display.

Though the decorum and sleek branding alone may be enough to draw your interest from the street, Conroy’s years as head chef of Mothers Restaurant are the backbone of this new venture. It’s glaringly obvious in both the presentation and execution of each dish that he has cut his teeth as a seasoned professional chef, and packs the entirety of his skill set into a format that he’s taking to its limit.

Whether you’re coming from the office or passing by from elsewhere, City Fare Café + Catering is absolutely a must-try. 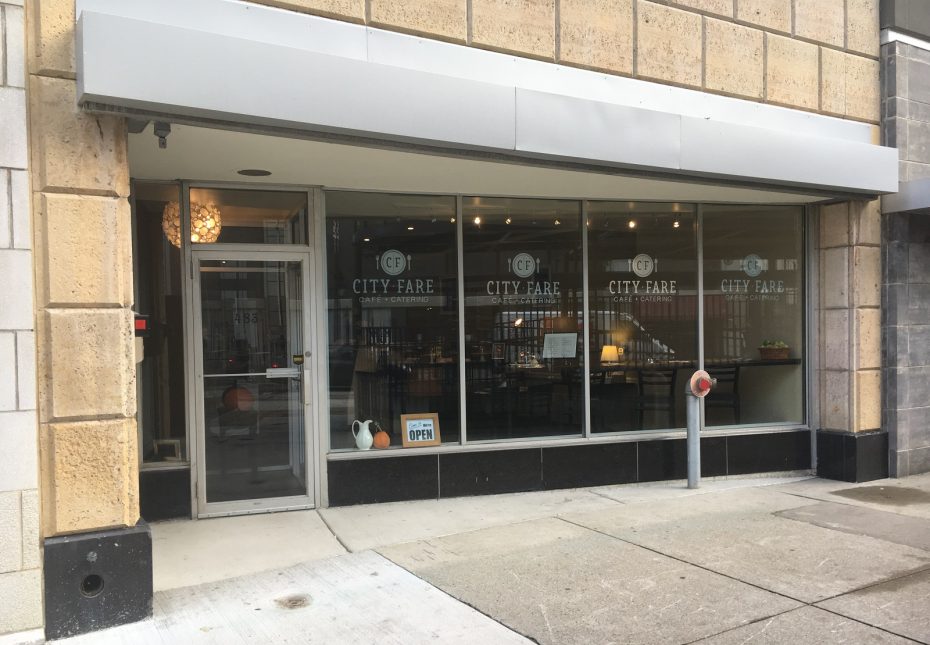