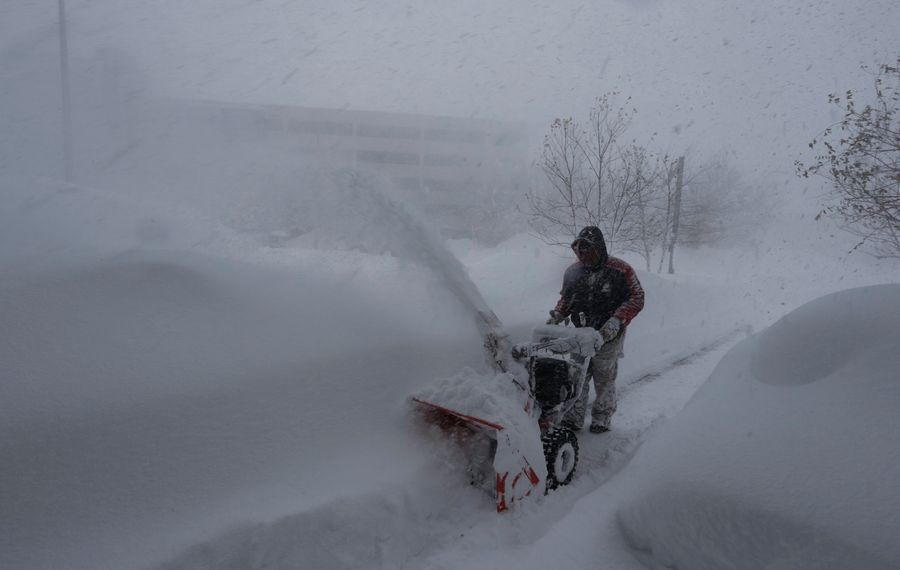 “Don’t get me wrong,” clucked the meteorologist. Lake-effect snow forecasting has improved enormously over the last four decades.

However, the improvements have progressed at such an incremental pace it might be difficult for many in the public to notice. For example, in 1984 when I arrived here, the primary weather model in our arsenal couldn’t recognize the Great Lakes as anything other than flat land plains because we lacked the computer crunch power and resolution to generate models which could represent the lakes as water. In a past article, I outlined our stark limitations in the then-burgeoning field of computer models.

Forecasts included elements of pattern recognition, upper air and surface observations and such tools as well-designed physics-based forecast “decision trees” developed over the years by the National Weather Service and universities. The basic principles — which admittedly won’t look basic to many of you — are contained in this outline from meteorologist Jeff Haby.

As high resolution close-in models have continued to improve with more sophisticated physics and much more computer crunch power, our forecasts for intensity, movement, and location of lake effect snow bands have continued to become more accurately specific.

Recently, an important and potentially benchmark technological improvement is beginning to be put into place. One name for them is “flux towers.”

In meteorology, flux is the term used to describe the transfer of heat from the earth’s surface into the atmosphere by way of conduction. These instrumented towers are slowly being installed in the Great Lakes to measure heat flux which, in turn, gauges the amount of evaporation which is occurring related to that flux.

These towers also host other instruments to measure wind speed, direction, humidity and solar radiation. They are a key element in determining how well high-resolution models are performing, and can greatly aid in improving that performance. The first few towers, costing $70,000 to $80,000 each, were funded by the U.S.-Canada International Joint Commission, but the last few have been funded by grants and budgeted projects. As of now, the only lake with no tower is Lake Ontario. That is very unfortunate in determining impacts downwind of that huge lake-effect producer.

Each tower is mounted on an existing lighthouse.

Lindsay Fitzpatrick is a data analyst with the Cooperative Institute for Great Lakes Research at the University of Michigan in Ann Arbor. She told environmental journalist Jacqueline Kelly of the Great Lakes Echo news service at Michigan State University that two or three such towers on each of the Great Lakes would be adequate to greatly improve the performance of computer models in predicting how much water vapor will evaporate from the lakes.

As of now, our sophisticated models still do a fairly poor job in estimating how much heat and moisture flux will occur in advance of and during a lake-effect event. The real-time data supplied by these towers will greatly improve model intensity and accumulation forecasts by providing data not currently available. The data will flow into the models even before lake bands begin to organize. As far as human resources go, the towers do require some staffing to monitor the instrumentation data stream and to analyze it, so it’s not “set it and forget it” technology.

As Fitzpatrick told Kelly, “With more measurements, we can fine-tune current models to prepare more accurate predictions of lake effect snow and ideally down the line, all weather that impacts the Great Lakes.”

Compared to the many millions in lost revenues and huge impacts of lake-effect storms on transportation and public safety, the investment  in the needed additional flux towers is quite small by comparison.