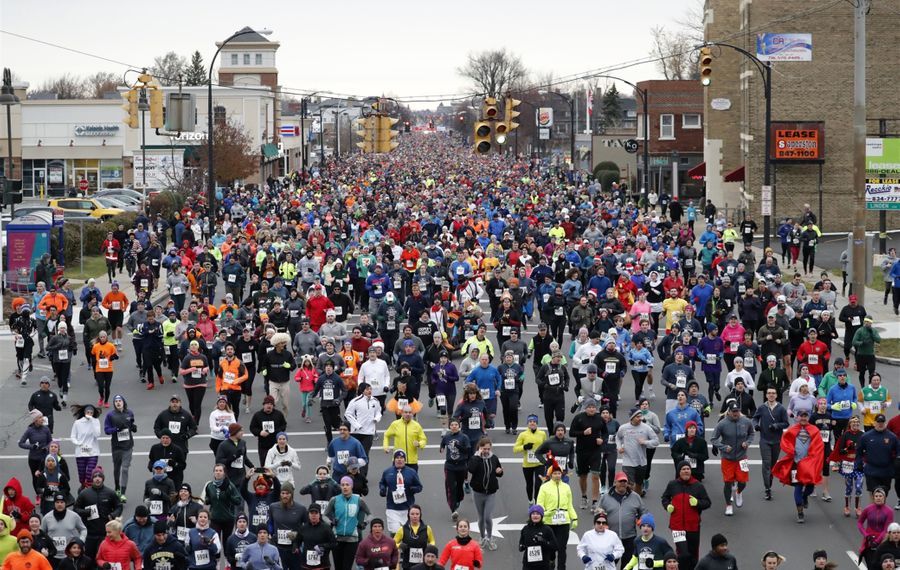 A pack of shark girls. Three people dressed as a turkey, gravy boat and fork. A woman dressed as "Cloudy with a Chance of Meatballs." A man carrying a canoe.

The colorful costumes that are a big part of the annual YMCA Turkey Trot's gaiety were on full display Thursday, as thousands of runners took over Delaware Avenue beginning at 9 a.m. They ran from Tacoma Avenue all the way past Niagara Square, concluding at the Buffalo Niagara Convention Center.

"The energy is just awesome – 14,000 people funneling through in the beginning, and the screaming under the tunnels," said Chris Fritz, referring to the Scajaquada Expressway bridge.  "I don't run many races, but this one has a constant energy that keeps you going."

It was another sold-out affair for the 122-year-old race, the longest continuous Thanksgiving run in North America. Last year, 12,243 runners of the 14,000 who signed up for the 5 mile/8K race actually turned out, according to Geoff Falkner, YMCA Buffalo Niagara's communications director. About $300,000 is raised to support the Y's programs.

The fastest race was run by Chad Maloy, 24, of Boston, N.Y. He finished in 24 minutes and 25 seconds, one of four men to run the race under 25 minutes. Jenny Delsignore, 22, of Tonawanda topped the women runners by reaching the finish line in 28 minutes and 18 seconds. For full results, go to ymcaturkeytrot.org. 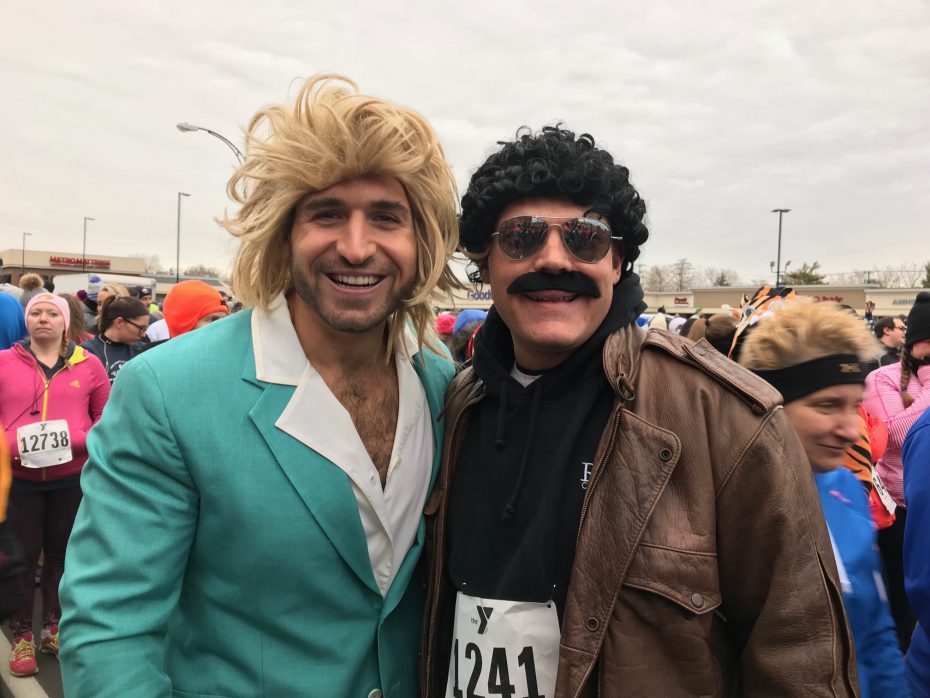 Hall & Oates were there, sort of. Joe Duff and Jason Botticelli did their best impersonations as "Maneater" blared.

Another man, a flag draped around his bare torso, ran as "Gonna Fly Now," the theme to "Rocky," played. The song appeared to inspire some runners as they paced themselves along the S curve and up to West Ferry Avenue, when the road leveled out. The last big stretch of the race, after North Street, was downhill.

"We're hungry for the competition," Wendy Wojcak, dressed as the gravy boat, said before the race.

"I'm not forking around," added Julianna Wojcak, the fork.

Curtis Wojcak, dressed as a turkey, said he felt "very toasty" in the 31-degree starting-time temperature.

Wendy Wojcak said she was concerned about the wind resistance her costume posed. "I think it will really affect my game, my 12-minute mile," she chuckled.

Katherine Toy of Alden said she has done the Turkey Trot about 20 times, and for her running made feasting later more palatable.

"You can get so enthused about being able to eat turkey because you've already run," Toy said. "It's a guilt-free thing."

Nearly 300 members of the Quarter Century Club – people who have run the Turkey Trot 25 or more times – were expected to take part. 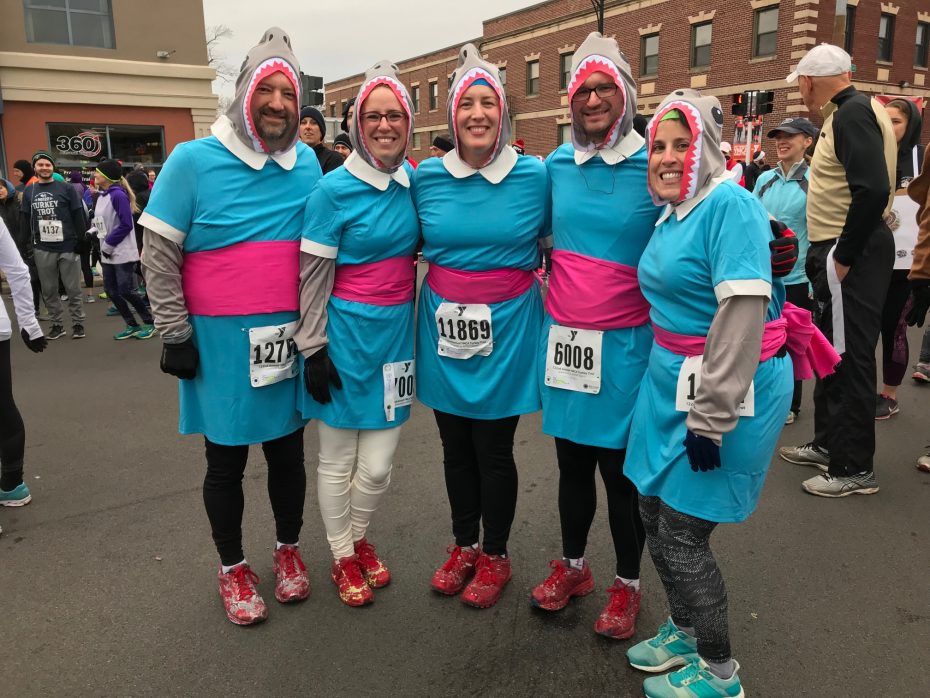 Turning heads were Steve Thompson, Julie Kruger, Liz Smith, Chris Jacobs (not the state senator) and Kathy Callan, who all dressed as Shark Girl, the work of public art located at Canalside.

"Everybody whispers from the crowd, 'It's Shark Girl, it's Shark Girl!,' " Smith said. "I was actually nervous. I am into the waterfront and civic pride, and I bring people from out of town to Shark Girl. I  wondered if people would really recognize Shark Girl, and I'm happy to find out they apparently do."

The 2017 Turkey Trot was the first run by DaCarianna Curry. She said it wasn't going to be her last.

"It'll be the first of many more," Curry said. "I liked pushing myself. I just started working out last month, and it was a good experience.

She liked something else about it, too.

"I liked the craziness." 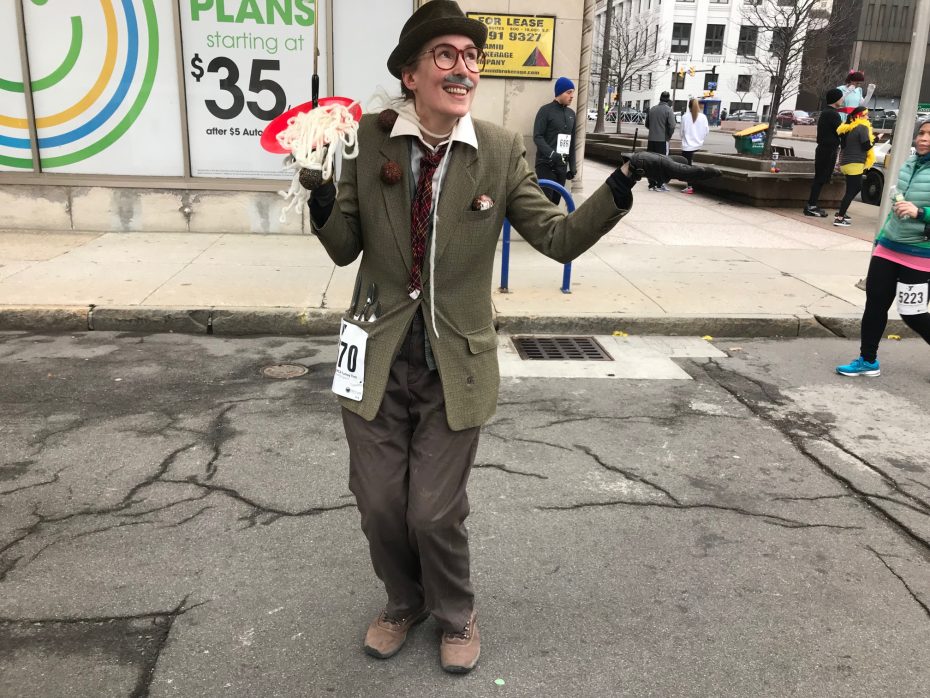 Michelle Holden did a well-received impression of "Cloudy with a Chance of Meatballs." (Mark Sommer/Buffalo News)

Craziness like Michelle Holden's impression of "Cloudy with a Chance of Meatballs."

"It was really fun," Holden said after the race. " It was the first time I've done this so I thought, go big or go home."