Raising lamb for the table is the end game at Stillwater Farm in Boston, New York. But for owners Jay and Margaret Braymiller, respecting life is paramount.

That includes maintaining the corporal integrity of the animals that call Stillwater home. Tending to the flock of market-bound lambs, as well as the sheep, chickens and potbelly pig that Jay, Margaret and their daughters call pets, is a full-time responsibility.

The Braymillers are equally attuned to life's metaphysical aspects. And that starts with recognizing their animals as sentient beings.

According to Margaret, concern for the mental well-being of their lambs undergirds everything they do. "The concept is to keep them comfortable and not stressed." 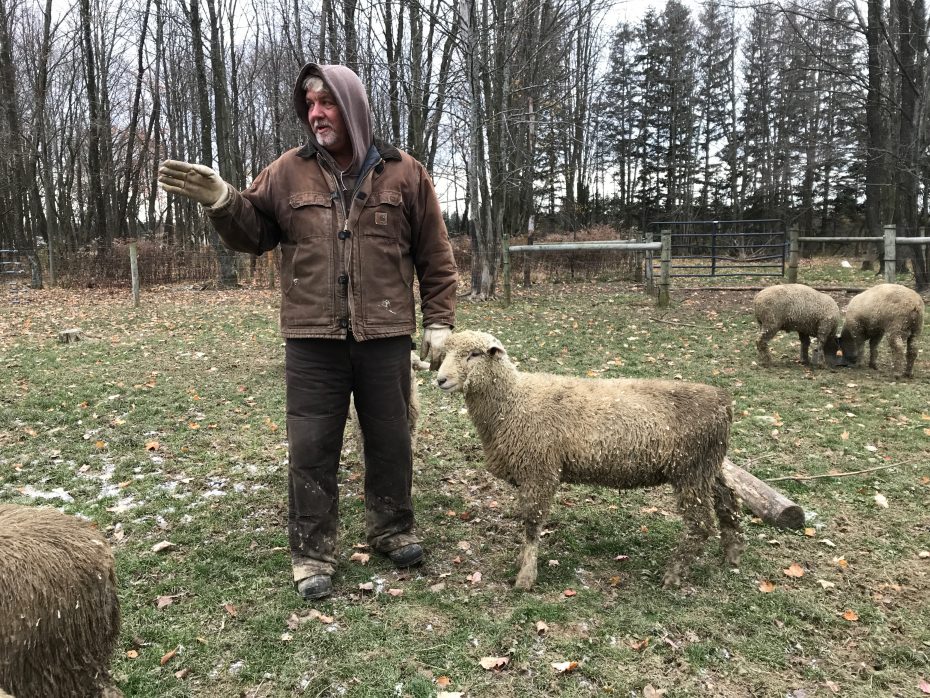 Caitlin Hartney / Special to The News

It is a practical ethos. Mistreated animals produce stress hormones that can negatively impact the flavor and texture of the meat they eventually yield. But for the Braymillers, thoughtful handling is as much a moral imperative as it is sound business.

"Their purpose is to feed people, and that is part of the natural process," Margaret explained. "But while they’re here, on a philosophical level, it is important to us that they be managed in a sensitive manner."

On my recent visit to the farm, that sensitivity was palpable. There is a bucolic serenity to Stillwater. It’s a quiet, placid place. The animals are not skittish but curious and friendly. And all of them, from the woolly lambs to the brilliantly feathered Ameraucana hens, are remarkably clean and comely. According to Jay, when animals are given care and space to thrive, it is reflected in their demeanor and appearance.

Jay, who grew up on a dairy farm learning the tenets of husbandry, credits Margaret, the granddaughter of a butcher, with teaching him to respect the inner lives of animals and appreciate premium meat. “She was actually a vegetarian for 10 years because she didn’t want to support big farming," he said with a glimmer of admiration.

Another pillar of the brand is its genetic standards. Jay and Margaret raise Southdown sheep, a breed renowned for its tender, flavorful meat. They source their lambs from a university in Ohio that breeds Southdowns of award-winning lineage for its veterinary program.

Once at Stillwater, the quality of the lambs' feed further distinguishes them. Breakfast is a blend of locally milled grains fortified by vitamins and minerals. Over the course of a day, each lamb consumes two to three pounds, plus his fill of protein-rich hay.

In season, the lambs graze on the grass that grows in their enclosure, but it’s the grain and hay that develop the toothsome micro-marbling of fat that makes for exceptional meat. 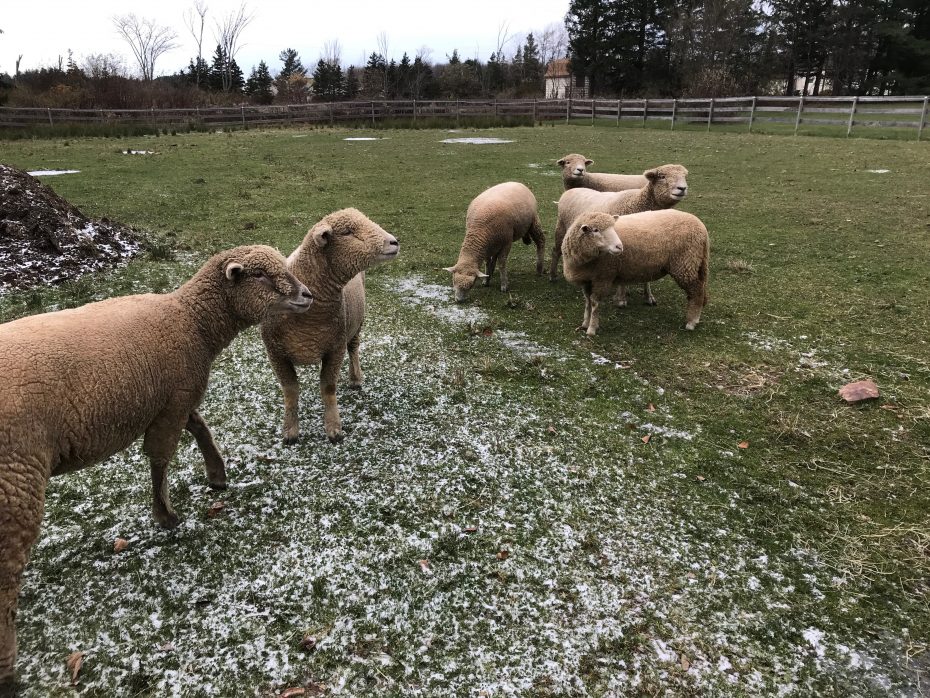 The Braymillers care for a handful of ewes and rams who will live out their natural days on the farm. They are considered Stillwater "lifers." (Caitlin Hartney/Special to The News)

Eventually, our topic of conversation turned to processing. When it did, Margaret became hushed and spoke of it only in roundabout ways. “We don’t like to discuss it in front of them,” she said, gesturing to the flock.

When it does come time to transport them to an USDA-approved butchering facility, the Braymillers will make efforts to limit the lambs' stress. A few days in advance, they’ll introduce the moving trailer into the enclosure to inure the animals to its presence. Then they’ll cajole the flock on board with shooing and words of encouragement. Out of principle, the Braymillers never resort to aggressive herding tactics like electric prods.

The dignified manner in which they process their lambs together with the genetics, handling and feed particular to Stillwater make for a singular product. Specifically, the gaminess many people consider off putting in conventional lamb is welcomingly absent. 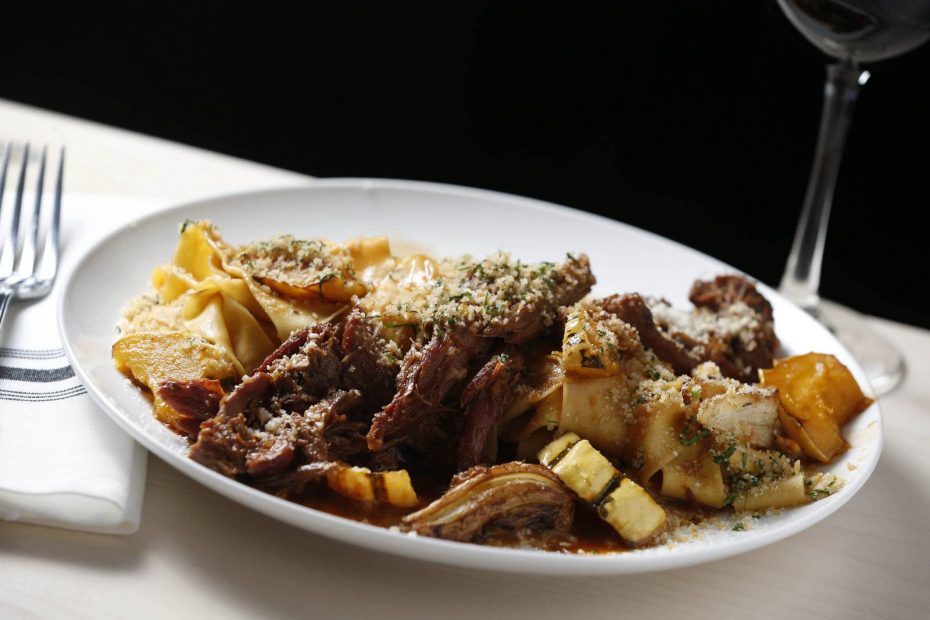 In many cases, the lamb appears as a temporary menu addition. At Billy Club, it’s a fall staple. There, Chef Scott Crombie braises the shoulder to fork tender. He serves it pulled with fresh pappardelle, roasted delicata squash, cippolini onions, fried sage, and parmesan.

One of Stillwater’s most enthusiastic champions is the team at Marble + Rye. Chef Michael Dimmer has seen firsthand the love that suffuses Jay’s work and admires him for it.

“Seeing the passion and commitment he puts into operating his farm with the highest standards and values…is the most amazing thing,” Dimmer said. “It’s a beautiful place that anyone would be lucky to call home, especially his lambs.”

Dimmer and his business partner Christian Willmott are such fans that they recently hosted a five-course Stillwater dinner replete with beverage pairings from Paradise Wine. Lamb was featured in every course, starting with oysters on the half shell served with a “pearl” of snow white, honey-sweetened whipped lamb fat. 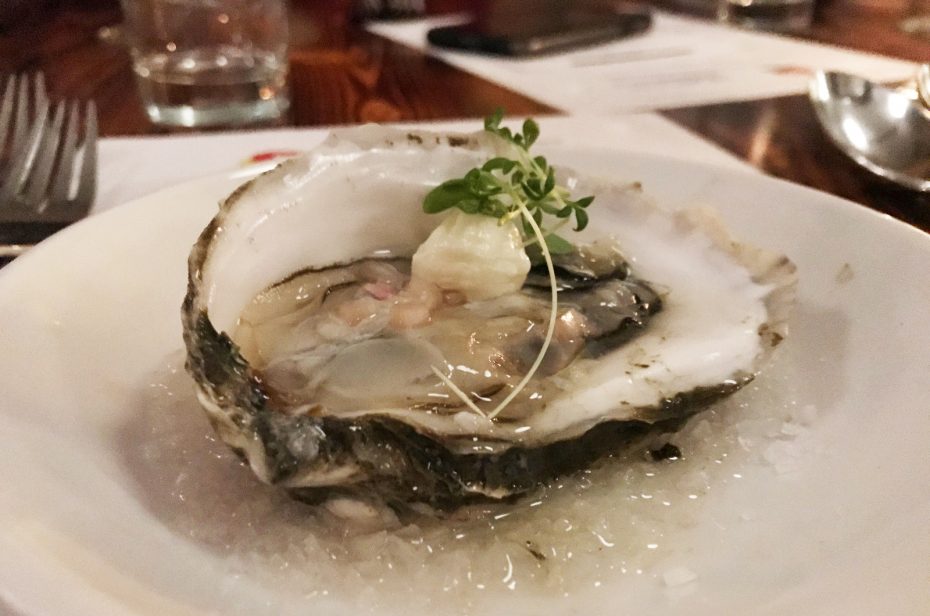 An oyster from Marble + Rye is enhanced by whipped, honey-sweetened lamb fat. (Caitlin Hartney/Special to The News)

For bucatini carbonara, Dimmer cured Stillwater lamb belly in a mixture of brown sugar, smoked paprika and a few untold secrets.  In course three, lamb shoulder, tongue, and cheek made for a rich and flavorful ovine cassoulet.

A classic lamb chop lollipop and sheep’s milk cheesecake with lamb fat graham crust rounded out the meal. From start to finish, it was a revelation of Stillwater lamb’s versatility. A gamier product might have exhausted the palate by course three.

The Braymillers have busted their chops (pun absolutely intended) to make inroads among the restaurant industry; now they are looking beyond. To that end, Stillwater launched a new e-commerce site where all manners of cuts may be purchased for home use.

Try not to be frustrated, though, if your preferred cut is out of stock; the imbalance of supply and demand means that sometimes Stillwater is completely sold out of product.

To remedy the situation, the Braymillers plan to raise 100 lambs in 2018. But don’t expect them to grow more quickly than that, even though their land could technically support faster expansion.

“We could stuff a bunch of animals in here, but just because you can doesn’t mean you should,” Margaret said. “Could we sell them? Probably. But that’s not how we want to approach things.”