Long before Buffalo ever had charter schools, it had BUILD Academy.

The school on the city's East Side was once the pride of the African-American community and a symbol in its fight for quality education. It infused black culture and heritage into its curriculum and pioneered a model that gave the community a say in running the school.

So when news came that the State Education Department was stepping in at BUILD, it was received with a bit of a heavy heart.

BUILD is one of only two schools in the state ordered to be taken over by an outside entity next year in an effort to turn things around, after years of poor academic performance.

It is also the first time the district will test the state's 2015 receivership law – though probably not the last, with so many of its schools teetering between good standing and being on the state watch list.

Superintendent Kriner Cash has until January to appoint an independent receiver at BUILD. He can also ask the state that the school be closed and reopened under a new model, although the superintendent doesn't seem keen on that idea.

That was the backdrop for a weekend meeting at the school on Fougeron Street, where the superintendent met with parents and stakeholders to explain BUILD's  circumstances and solicit feedback.

This is what the state's receivership law was designed to do – force struggling schools to improve one way or another.

But there's concern about losing control of a school, particularly one with such a proud legacy.

"I've been so sorry to see the BUILD that we knew become something else," said Johnnie Mayo, who was principal during the school's early days.

Maybe this is another opportunity for the community to step up, just as it did nearly a half-century ago when it founded the school, said Charley H. Fisher III.

"BUILD Academy was a successful model," said Fisher, former president of the organization that founded the school. "Now, many years later, we have to sort of pick up where we left off."

No one wants the job of turning around B.U.I.L.D. Academy

The school was conceived during the Civil Rights era, when several prominent African-Americans summoned national community organizer Saul Alinsky to Buffalo to help form an East Side organization that would become a strong voice in the city,

The result was BUILD – Build Unity, Independence, Liberty, Dignity – a powerful organization with more than 154 affiliated groups, churches, and organizations that would produce noted black leaders who would represent the community for years to come.

Education was a priority.

The organization began documenting the inferior education black students were receiving in Buffalo's racially segregated school system, and it was savvy at publicly exposing the inequities through boycotts and demonstrations, said John Siskar, a senior adviser with the Center for Excellence in Urban and Rural Education at SUNY Buffalo State.

Two incidents, in particular, incited the black community: an attempt to redraw the boundary lines of a new junior high school on Main Street to favor white students, and the transfer of a third-grade teacher at another school who was sympathetic to the organization's cause.

An agreement was worked out with the Board of Education, and in the fall of 1969, BUILD Academy opened on Clinton Street with nearly 400 kids in what was considered by some as the organization's "crowning achievement," Siskar said.

"The school did very well," said Doug Ruffin, who graduated from BUILD and later produced a documentary on its history. "Most of the kids that went to the school in the beginning were the children, nieces and nephews of the BUILD organization."

"But it became very popular very quickly," Ruffin said. "I think after the first year, more and more parents began to buy into the concept."

And that concept was unique.

The school had a policy board made up of members from the BUILD organization, the school district and Buffalo State College, as it was known then.

"They acted as a pseudo board of education," said Siskar, who has studied the school's history. "The board of ed still had official control over the school, but in many ways all the decisions were made by the local advisory board."

The content of the curriculum was culturally relevant. Ruffin, for example, recalled learning African dance and songs, and entering the school to portraits of the Rev. Martin Luther King Jr., Marcus Garvey and Shirley Chisholm on the walls.

"That was what really stood out," said Ruffin, owner of Urban Legacy Filmworks. "It made for a greater sense of self."

And the school had substantial parent involvement. Parents were asked to sign a contract that they would be actively involved in their children's education, said Mayo, now retired. Parents from the neighborhood were trained by Buffalo State as teacher assistants and offered on-site courses to earn degrees.

"It wasn’t about parents making sure kids were showing up and doing their homework," Siskar said. "Parents were really involved in the decision-making of the school and the running of the school."

By the mid-1970s, the school moved to Fougeron, became a magnet school and faced court-ordered integration and busing.

"Interestingly, the BUILD organization fought busing for BUILD Academy, which will sound contradictory until you understand that at essence it was about local control," Siskar said. "They owned the school. They were responsible for it. Good things were happening in the school."

But BUILD's biggest challenge was still ahead.

Progress, but not enough

Over time, the school's policy board ran its course and the BUILD organization shifted its focus.

Like the rest of the district, it faced other issues.

"Fifty years have transpired since this beginning and there has been a lot of change in Buffalo from desegregation to resegregation to challenges with the economy in Buffalo," Cash said. "In all those years, it did not stay illustrious."

These days, the school has roughly 450 students in grades pre-K to 8, more than 90 percent of whom are African-American. Poverty is high among the student body.

"What I found two years ago, it was near the bottom in terms of academic achievement," Cash said, "but even more significant than that the culture and climate was in shambles and so that, to me, was the first thing we needed to address."

Cash changed out 13 teachers at the school and brought in a new leadership team last year headed by a motivated, first-time principal in Kevin Garcia. 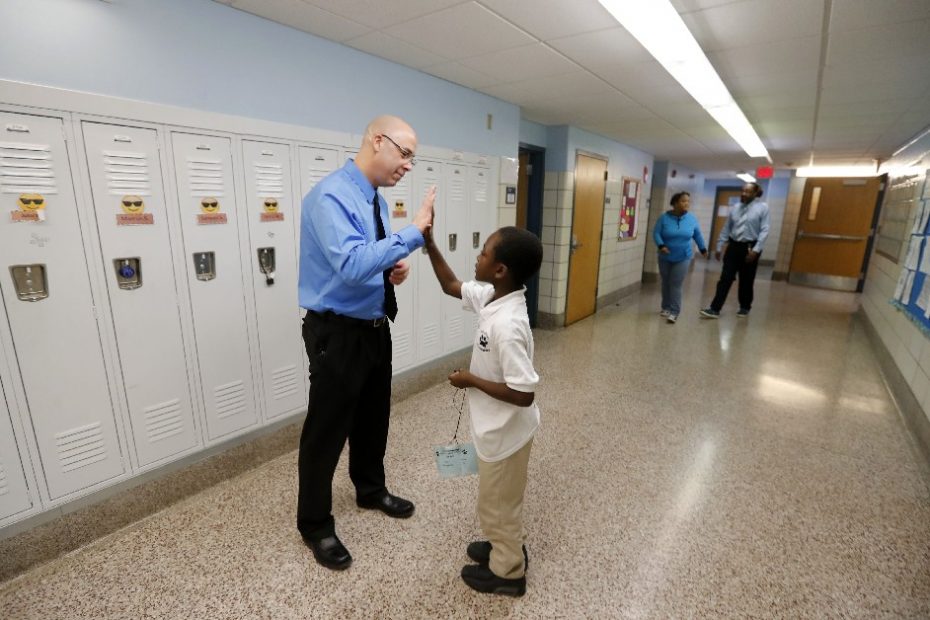 BUILD Academy Principal Kevin Garcia gets a high-five from third-grader Nicholas Artis-Cherry. Garcia said the school has instituted reforms to try to undo years of underachievement in "a short period of time." (Mark Mulville/Buffalo News)

"We focus on what we can do here now," Garcia said. "This has been progressive, so we're undoing years in a short period of time."

Garcia and his staff got to work on a laundry list of school reforms, including those as simple as projecting the image of students as "scholars." There's more focus on using individual student data to drive instruction; more emphasis on small groups to improve writing and reading skills; and addressing the trauma so many students deal with outside of school.

There has been some headway, like tackling the school's low attendance and high suspension rates, but it wasn't enough. BUILD missed eight of its 12 performance targets last year, leading the state to call for an outside takeover.

Garcia is convinced the school is headed in the right direction and that test scores will show a big improvement by the end of the year.

"Obviously we need to abide by whatever directives are given," Garcia said, "but we wish we would have had more time."

Cash, too, is not giving up on the school – quite the contrary.

"We are not taking the foot off the pedal for one second," Cash  said.

As the superintendent contemplates the next step for BUILD, there are those who believe the school needs to get back to its roots.

"I have no doubt that same way BUILD Academy came about years ago can be done again," Fisher said. "It can."

That means parents need to get more involved, Mayo said.

And it means more help from the larger community, said East School Board Member Theresa Harris-Tigg, whose district includes BUILD.

Cash isn't writing off the old BUILD model, but he said these are different times.

"When you truly get people engaged in the process you need to have patience," Siskar said, "and unfortunately we live in a day and age where we're so focused on test scores and instant results the ability to develop something like BUILD Academy is extremely difficult."