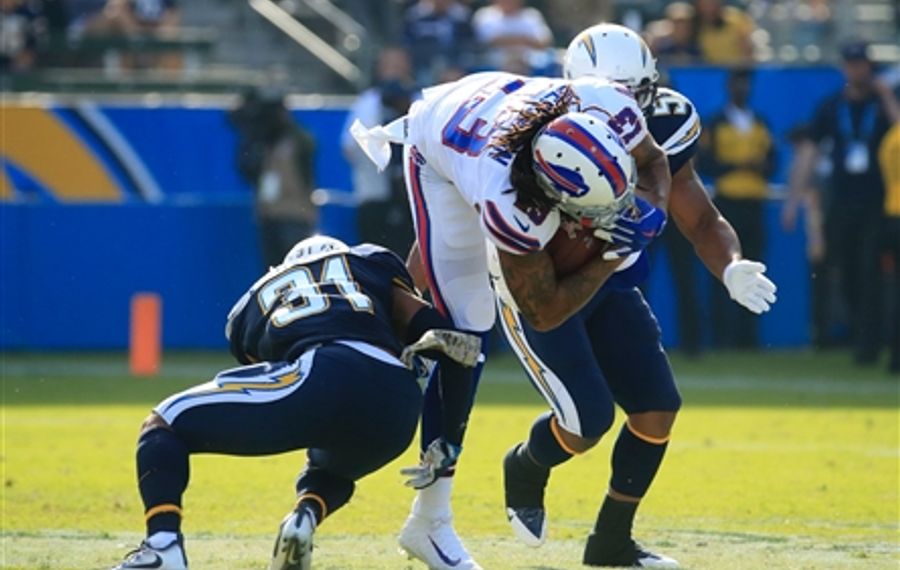 Unfortunately, that might be exactly what they got against the Los Angeles Chargers in a brutal showing Sunday. No. 1 wideout Kelvin Benjamin suffered a right knee injury on the fourth play from scrimmage during the Bills’ 54-24 loss at StubHub Center.

Coach Sean McDermott did not have an update on Benjamin’s status after the game. The receiver was seen exiting the Bills’ locker room under his own power, with a wrap around his right leg.

Benjamin was hurt after making a 20-yard reception on what was rookie quarterback Nathan Peterman’s best throw of the game. He was hit by Chargers safety Adrian Phillips on a clean tackle, and immediately grabbed for the back of his right knee. Trainers assisted Benjamin off the field as he tried not to put any weight on his right leg.

After briefly being examined in the medical tent on the Bills’ sideline, he was carted to the locker room. A short time later, the team announced Benjamin would not return to the game.

Benjamin, acquired on the Oct. 31 trade deadline, was playing in his second game with the team. He had three catches for 42 yards in his Week 10 debut against the Saints.

Benjamin missed the 2015 season with the Carolina Panthers after tearing the ACL in his left knee during training camp.

The Bills were already without veteran Jordan Matthews, who missed Sunday’s game because of a knee injury. After Benjamin was hurt, the Bills were down to rookie Zay Jones, Deonte Thompson, Andre Holmes and Brandon Tate at the position.

Jones led the team with 68 receiving yards on four catches after missing the Week 10 loss against the Saints because of an ankle injury.

Things went from bad to worse for the Bills on their opening drive two plays later when fullback Patrick DiMarco had a pass from Peterman bounce off his hands, leading to an interception that Chargers linebacker Korey Toomer returned 59 yards for a touchdown.

"Definitely disappointed. I've got to catch the ball," DiMarco said. "The ball doesn't come my way much, so when it does, I have to capitalize. I let that one slip through my hands, so it stinks.

Jerry Sullivan: McDermott's QB gamble blows up in his face

"There was some penetration, and I think I went to turn up field too quick. I kind of took my eyes off it and it just slipped through my fingers. It's just one of those plays you want back."

Coming into the game, DiMarco had four catches for 26 yards on the season. He had three catches for 21 yards against the Saints in Week 10, the first since making one catch for 5 yards in the season opener.

Kicker Stephen Hauschka made NFL history for the Bills in the third quarter. By making a 50-yard field goal, Hauschka became the first player to convert 13 consecutively from that distance or longer.

“It wasn’t even something that was on my radar until you guys (in the media) brought it up to me,” he said. “I’m proud of it. When I was kicking it, I knew it was for a record, too. I still had to just focus in. Obviously, I’d love it if these were kicks to win games.”

Hauschka's six field goals from 50-plus yards this season ties a team record set by Dan Carpenter in 2014.

Travaris Cadet replaced Tolbert as the No. 2 running back and provided a bit of a burst, gaining 17 yards on three carries and catching a team-high six passes for 39 yards. Tolbert had gained just 1 yard on six carries in the Bills' past two games before getting hurt.

Wright and Thomas were healthy inactives for the first time this season. Wright was replaced as a reserve cornerback by Lafayette Pitts, while Thomas' role as the team's third tight end was filled by Khari Lee.

Dion Dawkins started for the fifth time this season in place of Glenn at left tackle. Starting tight end Charles Clay was active after being questionable with a knee injury, finishing with three catches for 27 yards.