Tom the turkey likes to play chicken with traffic.

The plucky bird is a common sight at the intersection of Klein and Paradise roads in East Amherst, where he often blocks lanes, pecks at tires and circles cars.

While a neighborhood fixture and quirky oddity, his bold behavior has also garnered Tom a reputation as a nuisance.

"He'll just walk up right in front of the cars," said Steve Levy, a resident of the nearby Roxbury Park neighborhood. "He'll start going right by the tires and quite frankly it's really kind of dangerous. I'm surprised nobody's had an accident trying to avoid the thing."

Jay Collier, a foreman in the town Highway Department, witnessed such an incident as recently as Friday morning when Tom forced a woman to stop her car at Ayer and Klein roads then started circling it.

"What do I do?" she asked Collier, who was out picking up leaves.

Collier chased Tom to the rear of her car so she could drive off.

No one's quite sure where Tom came from or how long he's been around. Some say two years, maybe five years.

He has his own Facebook page, filled with photos. The most recent post, from Nov. 8, is of a box of Tofurky vegetarian roast and asks people to consider it for Thanksgiving.

Late Friday morning, the celebrity turkey was off to the side of the road preening his plumage when several drivers slowed to take photos.

Amherst Police Chief John C. Askey said it's not unusual for a wild turkey, or other wildlife, to hold up traffic in certain areas of the town. He advised motorists to use caution, pull over and let the animal pass.

"It may be an inconvenience from time to time with traffic but that's something the public has to deal with," he said. "There's wildlife, deer, raccoons, geese are in the road on a regular basis. We ask them to have patience and contact us if there's anything unusual."

It's not just current East Amherst residents who have been interested in turkeys. Benjamin Franklin wanted the turkey to be the national bird, not the bald eagle.

"They were fascinated by turkeys even back then," Rende said.

He speculated that someone may be feeding Tom.

"Believe it or not, animals know where they're safe and comfortable," he said. "He's got to be getting food in that area somewhere or somebody's feeding him." 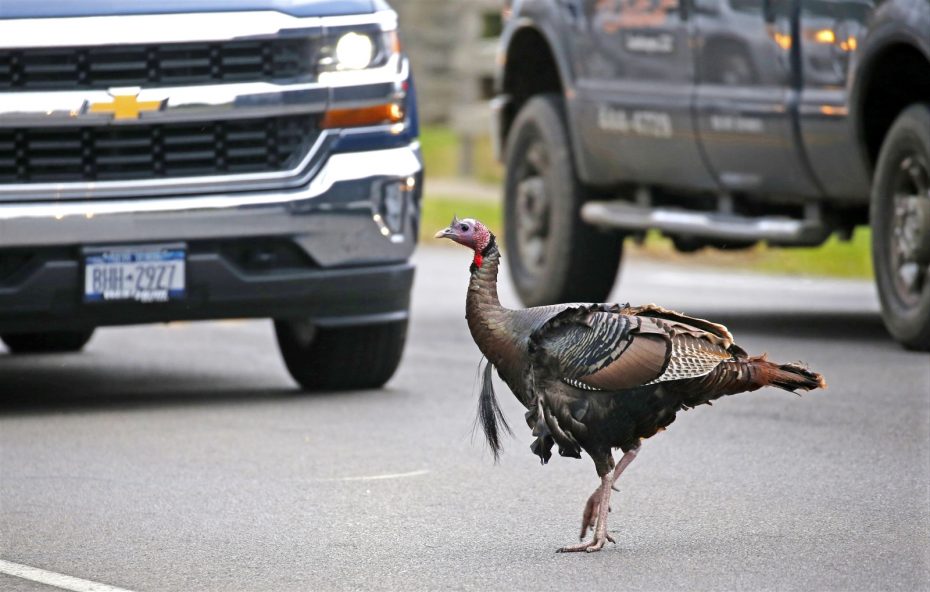 Wild turkeys like Tom can be curious and unpredictable, Rende said.

"They're the type of species that's readily adaptable to people," he said. "They can get around in a suburban-type environment."

From a photo, the DEC biologist identified Tom as a male eastern wild turkey, which has a population of between 35,000 to 50,000 in Western New York although their population is declining.

The statewide population of 200,000 has declined about 30 percent over the last few years as it becomes more difficult for wild turkey hens to survive. Weather, predators, and changing habitat are all factors, said Rende.

"As habitat changes, it affects good nesting cover, which in turn makes the turkeys more vulnerable to predation," he said.

As a result, the DEC has reduced the fall turkey hunting season to two weeks between Oct. 21 and Nov. 3.

Mary Faracca, secretary for athletics at nearby Williamsville East High School, does not count herself among his fans.

"I wouldn't mind if someone took him somewhere and he didn't come back. It sounds mean, and I'm an animal lover, but I'm surprised there's not been a bad accident," she said. "I've seen people almost get killed getting out of their car and motioning to redirect traffic so they don't run over the turkey."

She said it's "unnerving" to drive in the area with her 2-year-old grandson, especially during the morning and afternoon rush hours when Tom seems to be most active. She tends to avoid the area whenever possible.

Daphne Finnegan and her husband, Russell Dye, of Britannia Drive, see Tom's escapades as more comical and offered to "pardon" him.

"He's so funny," Finnegan said. "He seems to like people and cars. He's continually walking up to cars,and he's not afraid of people."

Collier said Tom lets humans approach to within two to three feet before he scurries away. He carries apples and has used pieces to lure Tom away from the road.

A flock of about 30 wild turkeys lives in the area, Collier said, but several people described Tom as a "loner." A woman on Paradise feeds him, and he lives in her backyard, he said.

"At nighttime, they have to go up in trees and roost," he said. "Otherwise the coyotes will get them. That's what all the hunters at work tell me. They hate to fly."

Askey, the police chief, said he's aware of a flock at the Buffalo Country Club property at Youngs Road and Sheridan Drive, where a vehicle struck a turkey that entered traffic.

"He'll probably be in hiding the next couple days with Thanksgiving,"  Levy said. "But I just don't understand how he's never been hit."