Pictures of Murakami -- clothed in a double-breasted jacket of red lamé, a patchwork skirt and a plush headpiece that made it appear as if he was being consumed by a deranged Care Bear with fangs -- clogged Buffalo's Instagram and Facebook feeds. He was in town to celebrate the opening of his show, meet with fans, and attend the gallery's annual gala.

Those unfamiliar with Murakami's vast artistic output and high-profile -- and his attempts to bridge Japanese and American culture and commerce with his famed "Superflat" style -- might reasonably wonder what the fuss was about.

Murakami, surrounded by young members of his Tokyo- and New York-based art and merchandising company Kaikai Kiki, recently spoke about his latest work, his deep fascination with Japanese cultural history and what he learned from watching "Star Wars."

Murakami answered some questions in English and others with the help of his translator, Yuko Sakata. The answers in both cases have been substantially condensed and edited for clarity. 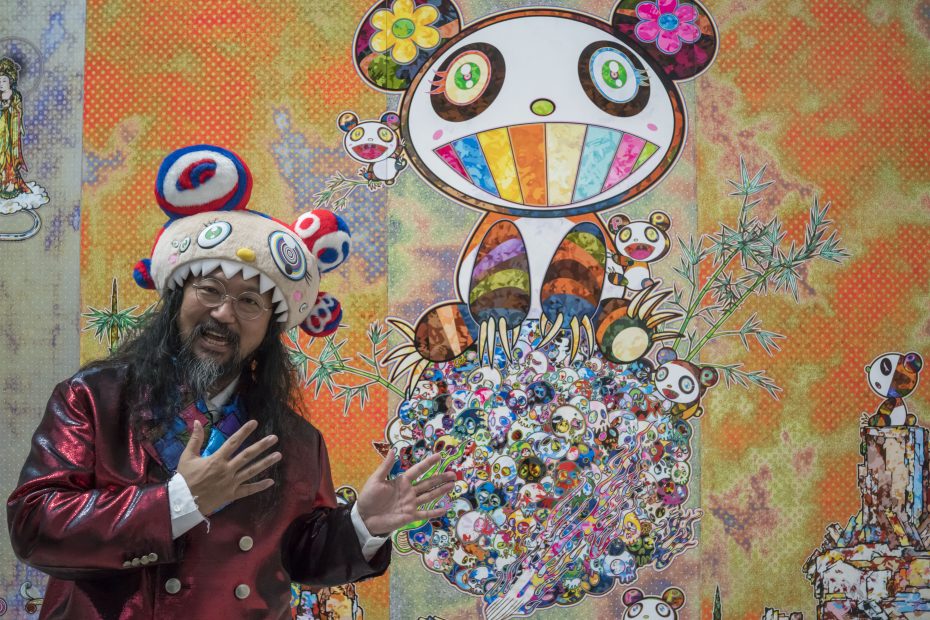 Question: Are any works in the Albright-Knox collection that you feel connected to?

Answer: I am very nervous to show here, and I had 100 percent tension for making the pieces. They’re really serious, a serious mindset.

Outside of this room, you can find a Van Gogh painting with no glass, just real canvas. It’s amazing. A big city gallery would have protection, many layers of glass or something like that. But this museum doesn’t have that barrier.

Q: Do you still feel you're working in the "Superflat" style, or is that something you've left behind as a label?

A: Since I first wrote the book on "Superflat," the social environment and situation has changed a lot. At the time, the Internet was not around really, and the physical distance between Japan and America was still large, and also the informational distance was much larger than now.

Now I think this word can actually be very powerful in describing this part of the world, so it’s even more apt and relevant.

I’m trying to bring narrative back into my work. But it’s not the kind of narrative that anyone can just look at and understand. In the current art world, the factor of narrative is a little bit seen as lower, kind of looked down on. By putting that aspect back into the art and combining it with what’s considered "high art," it’s another form of "Superflat."

Q: After your recent collaboration with professor Nobuo Tsuji for your current show at the Museum of Fine Arts Boston, what did you learn from that experience either about yourself, your country, or the direction you wanted to take your art?

A: When I was in high school, I saw "Star Wars" and I was blown away by it, and I was very much influenced. In Japan, the sci-fi stories were told through two-dimensional animation; In America, it was live-action and SFX (special effects), a revolutionary image. I had a very basic question about why, in order to depict this kind of world, in Japan, it becomes not something realistic, but pictorial or a 2-D expression.

Then I encountered professor Tsuji’s book and in that book he stated that the contemporary manga has a lot to do with historical works, it actually comes from that lineage. And it was the first time that a Japanese art historian with authority would state such a thing, and that really encouraged me.

And then, eventually I had the courage to approach him and I had a relationship, this back-and-forth. And all my current works have come out of that relationship. 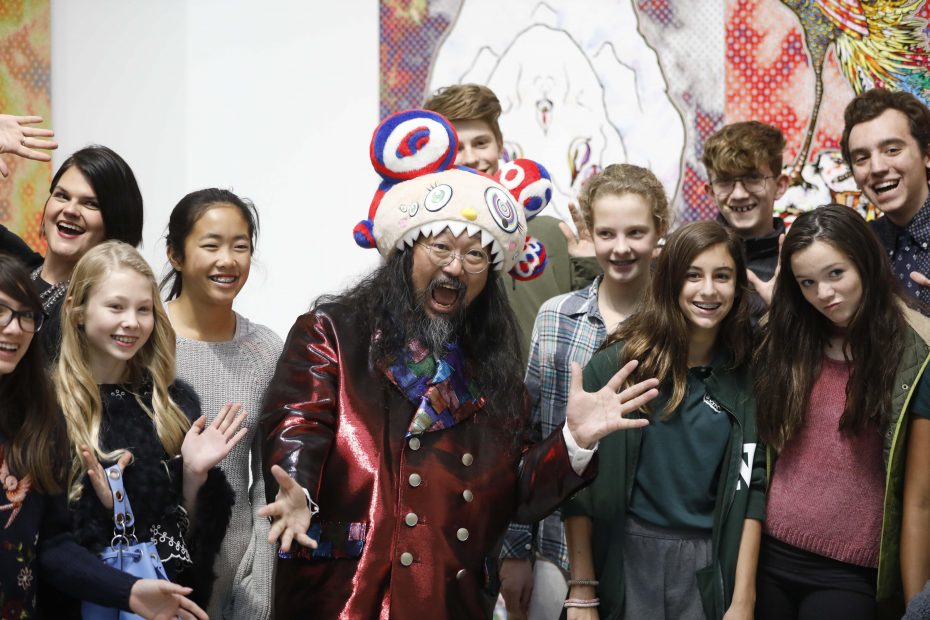 Takashi Murakami has a little fun with students from The Nichols School during a ceremony to open his new exhibit "The Deep End of the Universe" at the Albright-Knox Art Gallery, (Derek Gee/Buffalo News)

Q: I’ve always been curious where your entrepreneurial skills have come from. Most artists, I think, aren’t great at the marketing, business aspect. They have other people do that for them.

A:  I have been greatly influenced by the story of George Lucas. He taught me and everyone else in the behind-the-scenes videos how he had actually worked on the money flow and then in his books there were stories about his contact with Hollywood, his contact with the 20th Century Fox, all of those are in the videos and books. So I learned from it.

What he was telling us was that in order for a creator to make their work freely, completely without restriction, you really have to control your own funding as well. I had learned that in my early years in the university. So I thought that in the future if I actually want to do something, I do need to have the funds for it myself. From when I was 20 until now, that’s how I’ve been operating.

"Takashi Murakami: The Deep End of the Universe"