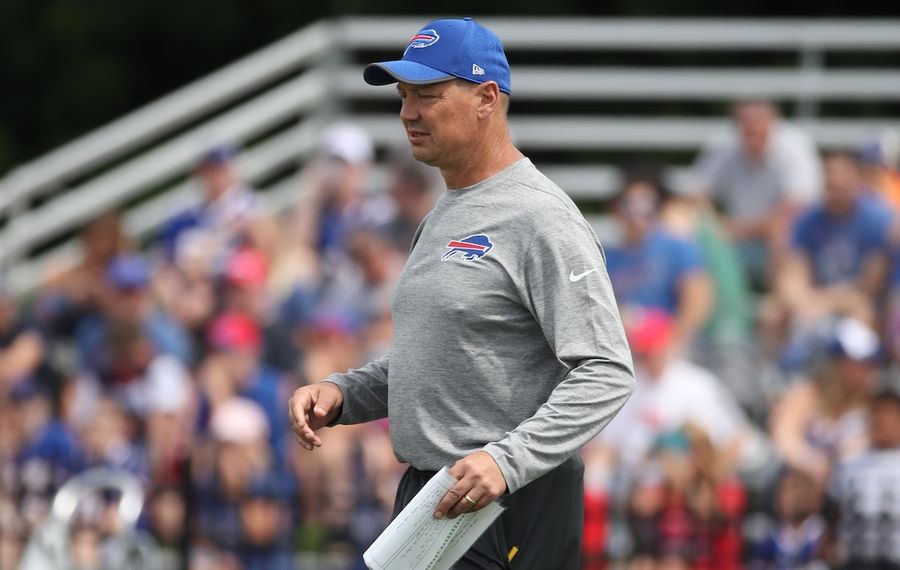 The switch from Tyrod Taylor to Nathan Peterman this week dominates the conversation when it comes to the Buffalo Bills. It also overshadows the fact the Bills’ defense has completely fallen on its face the last two weeks.

That stretch last Sunday when the New Orleans Saints ran the ball 24 times in a row was as dominant as you’re ever going to see in the NFL. Not surprisingly, those two topics dominate this week’s mailbag.

Matthew asks: If Peterman and the offense still stink next week is it possible that Dennison could be fired?

Jay: Matthew and Don, you’re not alone in wondering that. Dennison’s future is absolutely fair to question. As you know, the Bills led the NFL in rushing the past two years with basically the same offensive line and running back. They are 15th this year. Under Anthony Lynn’s direction last year, the offense averaged 24.9 points per game, tied for 10th in the NFL. That’s down to 20.4 points per game this year, which ranks 20th.

It’s important to remember that Dennison was not Sean McDermott’s first choice as offensive coordinator. Brad Childress and Greg Olson were reportedly at the top of his list. McDermott has his own problems with a defense that has fallen apart since Week 5, but he’s not going to fire himself.

The main issue I have with Dennison is his unwillingness or inability to pair his scheme to what Taylor does best. When he took over, all the talk was about how we would see more bootlegs and moving pockets to take advantage of Taylor’s superior athleticism. Where have those been? The best coaches know what their players do best and put them in those situations. It’s hard to look at the Bills’ offense through nine games and say Dennison has done that.

Beth Sullivan asks: How much will Nathan Peterman’s extra 2 inches of height help him with throws from pocket?

Alex M. asks: Analysts argue that Tyrod is too short to throw from the pocket. Peterman is 1 inch taller. Does it make a big difference?

Jay: Peterman is listed at 6-foot-2, while Taylor is 6-1. So, no, there is not a great difference in height. It will be interesting to see if the Bills go to more passing plays run with Peterman under center as opposed to operating out of the shotgun. According to the website sharpfootballstats.com, 82 percent of the Bills’ passing plays in 2017 have come out of the shotgun formation, which ranks No. 12 in the NFL.

I expect one of the big reasons the Bills made this switch is because they believe Peterman will get the ball out of his hands quicker. That doesn’t mean he’s not at risk to having passes batted down at the line of scrimmage, but that’s true of any quarterback, no matter their height.

According to the analytics website Pro Football Focus, Taylor has had an average time to throw of 3.11 seconds, which ranks No. 1 in the NFL. The Bills will want that to be cut down with Peterman under center.

Brendan Sweet asks: What are the chances Peterman is the QB of the future? Wouldn't it be great if we hit on a fifth-round QB and could use all these picks on filling out the roster?

Jay: That would be the dream scenario for the Bills, yes. Peterman would have to shock the world, though, for the team not to invest in a quarterback early in the 2018 draft. By that, I mean challenging the Patriots for the AFC East title. The Bills could get into the playoffs at 9-7 with Peterman starting because of how weak the AFC is, but that doesn’t mean I wouldn’t look for an upgrade at quarterback.

A couple weeks ago, I wrote that it would make sense for the Bills to bring Taylor back next season for the last year of his contract. That way, he could serve as the starter, Peterman could be the backup and a high draft pick could spend the year on the bench. That’s highly unlikely now. The coaching staff has determined Taylor isn’t good enough, so now we’ll see if Peterman is. If that’s the case, my 2018 plan would now look like this – Peterman starts, a veteran backup/mentor is signed and the high draft pick still uses his rookie season to learn. Best-case scenario, Peterman ends up being the next late-round diamond in the rough, and the Bills have a valuable trade asset in a young quarterback. Or, that young quarterback develops and Peterman becomes trade bait. Options at the most important position would be a nice problem for the Bills to have.

Lisa Marinucci asks: How do they fix defense? Thought that has been a surprise to me prior to past two weeks?

Jay: Here was McDermott’s answer to the question of whether it was effort or breakdowns fundamentally that led to the last two stinkers by the defense: “Fundamentals and technique weren’t where they needed to be.”

As to which one is easier to fix, he said: “I’m of the belief that it’s easier to change things when it’s fundamentals and technique. Now, that’s not easy, either, because that takes work. Whatever you do, usually in life, right, takes work. In this case, no different.”

The coaching staff this week has taken a “back to basics” approach.

“We have to go back to the fundamentals of what we do, and teach it as if we’re at the beginning of training camp,” defensive coordinator Leslie Frazier said. “Not take for granted that everybody understands the importance of being in their spots. Obviously, that’s not the case. We have to get back to the basics of run defense.”

The alternative to a breakdown in fundamentals are that the Bills just aren’t good enough at several positions up front. McDermott better hope his idea is right, or it will be a long rest of the season.

Grayson Tumult asks: Jay, the stubbornness of the O-line coaching staff is maddening! Why stick with Vlad Ducasse and Jordan Mills when Ryan Groy and Seantrel Henderson are available? At least try.

Jay: It wouldn’t be a mailbag without a question about Groy. All I can say is what I have been saying – the current coaching staff likes him best at center, and he’s not starting there ahead of Eric Wood.  Groy is active on game day because he’s got the flexibility to play both positions, but it doesn’t look like he’s getting a shot at a starting job any time soon.

As for Henderson, I thought I saw him mix in with the first team once or twice during individual drills this week at practice, but without seeing team drills, it’s hard to know that for sure. He was active for the first time this season in Week 10, and played only on special teams, so he’s slowly working his way back. The coaching staff seems to like what Jordan Mills has done, so I wouldn’t expect a change any time soon there, either.

“Uncle Bones” asks: If the Bills were going to bench Taylor, why didn’t they just trade him? It’s not as if the Broncos wouldn’t have ponied up at the deadline?

Jay: It’s funny you mention the Broncos. Think back to 2015, when Taylor was a free agent. It was reported the Broncos were interested in signing him as Peyton Manning’s backup at that time. The offensive coordinator at that time in Denver? Rick Dennison.

My how things have changed. Unless John Elway told you personally he tried to swing a deal for Taylor, I can’t say for certain that the Denver would have “ponied up.” Also, the Bills were 5-2 at the trade deadline. McDermott is taking enough heat nationally right now for benching Taylor. Imagine what the reaction would have been had he traded his starting quarterback then. The last two games clearly are a big part of why Taylor got benched.

Jureller asks: What do you see as the most necessary allocation of the new-found cap space for 2018?

Jay: It starts with prioritizing which free agents the team wants to retain. Of the 18 players scheduled to become unrestricted free agents, the biggest ones are Kyle Williams, Preston Brown, E.J. Gaines, Jordan Matthews and Ramon Humber – all of whom are starters.

Once that is decided, the team will need to figure out what it’s doing at quarterback. The writing is on the wall for Taylor to depart, but that opens a spot for a veteran backup. After that, the Bills will have to prioritize which positions they want to address in free agency and which they think can be filled through the draft. Pick a position on the roster and there is a good chance the Bills have a need at it.

Dave McKinley asks: Of the 17 QBs who have started for the Bills since Jim Kelly retired, who was the best one not named Flutie or Bledsoe?

Jay: Taylor. He’s 20-18 as a starter, thrown for 47 touchdowns against 15 interceptions and completed 63 percent of his passes. He’s also the franchise’s all-time leader in rushing yards by a quarterback. The only other name to possibly consider in Ryan Fitzpatrick, and statistically, it’s not close between the two.

The worst, by the way, is Brian Brohm. He went 0-2 as a starter over 2009-10, throwing five interceptions and not a single touchdown.

Thanks for the questions this week.