It's the most Buffalo time of the year.

Spirits soar as we warm up for the Turkey Trot, one of the 100 Things every Western New Yorker should do at least once. And for the World's Largest Disco, another adventure on our bucket list. Friends and relatives flock in from out of town, craving wings and beef on weck. Thanksgiving is in the air.

It's fun to celebrate this pride of place with a visit to the Buffalo History Museum.

The museum draws its biggest crowd of the year for its annual Train Day, which takes place from 1 p.m to 4 p.m. the Friday after Thanksgiving.

What is more picturesque than watching toy trains zip around an elaborate track, against the backdrop of carefully curated Buffalo landmarks that would have been around at the turn of the last century? Buffalonians, gather round!

You can always add things. A current exhibit focuses on the part Buffalo played in World War I. An upcoming exhibit called "Icons" will celebrate Buffalo's sports stars. And you don't want to miss Tim Russert's desk, a relatively recent arrival. 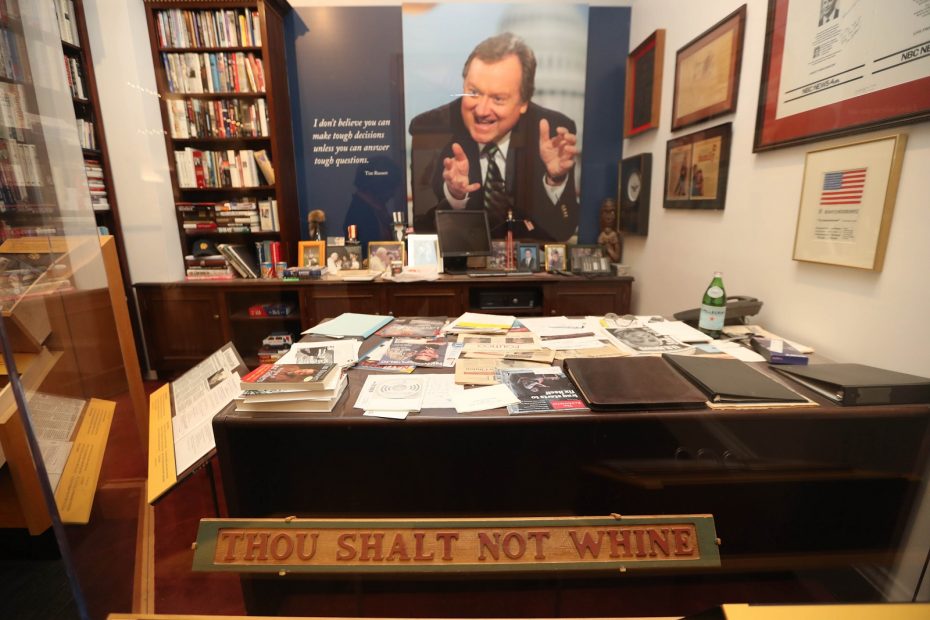 This is the exhibit "Inside Tim Russert's Office." (Sharon Cantillon/Buffalo News)

But the best things are treasures that can only be called timeless. They shift around, and sometimes they're repackaged. Happily, though, they stay.

The ancient Street of Shops, in the basement, takes you back to Buffalo as it was in the early 1800s. It's a cobblestone street lined with several historic storefronts. And the piece de resistance, the jewel in this crown, is Millard Fillmore's carriage. Fillmore, who clawed his way up from abject poverty, founded the Buffalo Historical Society, along with our library system and various other institutions of learning. A visit to his graveside ceremony was on our 100 Things bucket list. The carriage makes things complete.

One thing bothered us. Where was Mr. Pickwick? The big, wooden, round-bellied Victorian figure once graced a Buffalo cigar shop, and went on to grace the Street of Shops. We missed Mr. Pickwick -- until, with joy, we ran into him on the second floor, apparently part of an exhibit called "Neighbors." Hello, old friend! 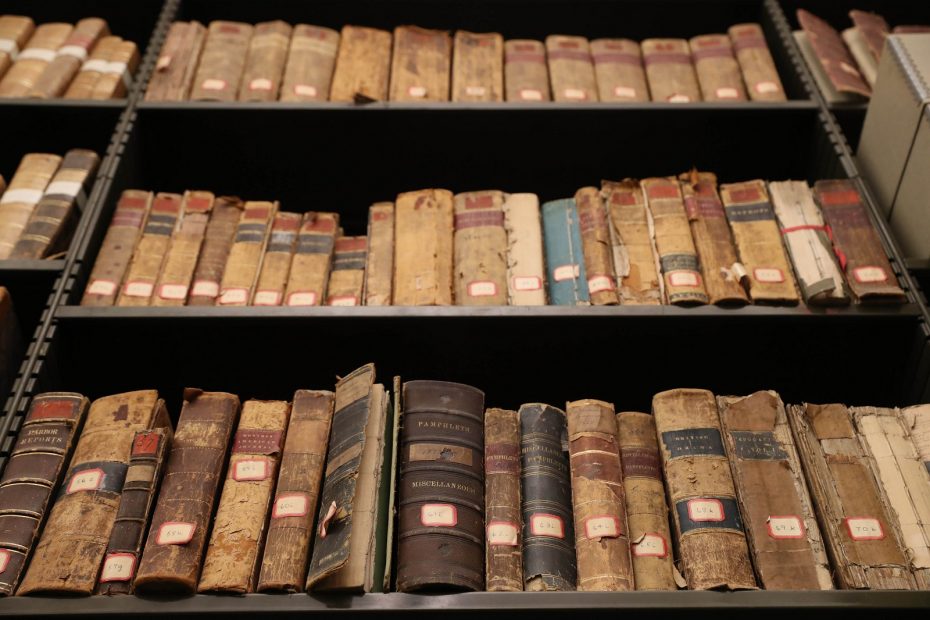 Many of the older books on this wall of the research library are from the private library of John Chase Lord, the Central Presbyterian Church pastor. Many of the books are on European history and theology. These books are more for decoration now since the library focuses on WNY history. (Sharon Cantillon/Buffalo News)

The library, established in 1930, has the kind of musty air that tells you it has grown only organically over the years. A bust over the door depicts John Chase Lord, the Presbyterian pastor who donated many of the original books.

The quiet weekday The News visited, two researchers were hard at work under Lord's approving eye. Peter Christiansen, an art history professor from the University of Rochester, was digging through documents on the Peace Bridge. Olmsted Parks historian Martha Neri was poring over old maps of Buffalo.

"I always say I want to sleep here," Neri joked. "But I wouldn't sleep, that's for sure." 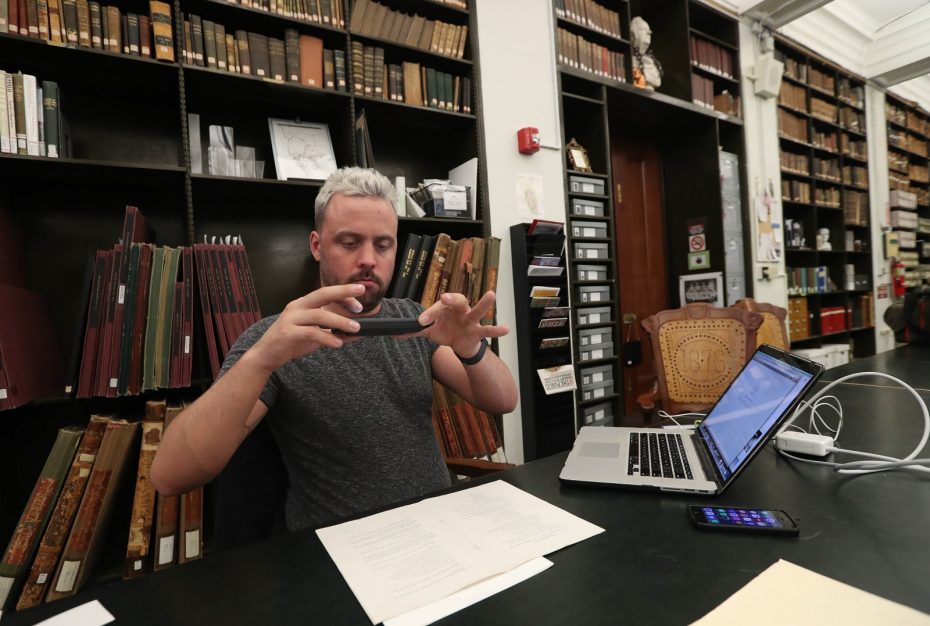 Peter Christiansen, a professor of art history at the University of Rochester, finds documents related to the opening of the Peace Bridge. He's writing an essay on the subject. (Sharon Cantillon/Buffalo News)

She turned back happily to her map.

"I love coming here, touching these things for real."

Seeing things in person, that reminded us, is different from seeing things online. There is beauty in the beholding. Dignified old paintings depicting Jesuit missionaries have been around since time immemorial. Native American cabins and canoes have also long been part of this hallowed hall.

Some items cycle in and out, though, because the place isn't big. That means that however many times you have visited the museum,  there will always be something you don't remember. For me, that item was an elaborate Apostles Clock crafted God knows how many decades ago by a Buffalo amateur clock maker, now on display in the gift shop. Where had this magnificent oddment been hiding?

The star of the show is the hall itself. 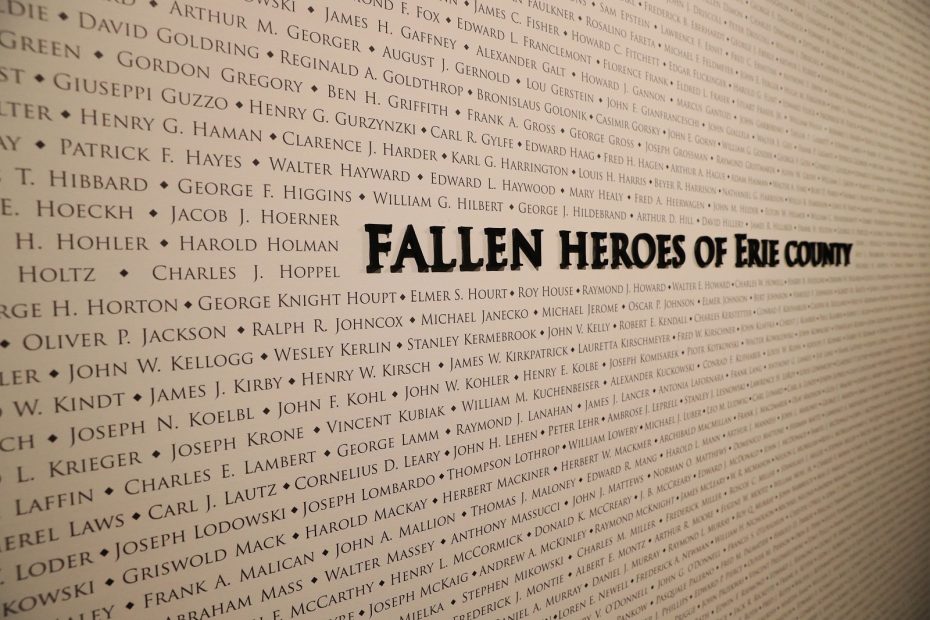 "For Home and Country" is a World War I centennial exhibition. It opened in April and will continue until the end of 2018. (Sharon Cantillon/Buffalo News)

The History Museum, designed in high classical style by architect George Cary, was the only building in the 1901 Pan-American Exposition that was built to last. And it has lasted, splendidly. Everywhere you look, there's something to admire. The wide, dignified windows. The ornate columns. The gorgeous, glittering light fixtures. Don't forget to look up -- the ceilings are magnificent.

Outside, stentorian sculptures command your attention. Lincoln holds the Emancipation Proclamation. The sculpture "The Centaur" is the work of Charles Cary Rumsey. The building's friezes depict such lofty concepts as the Forces of Civilization. They create a feeling of ambition, of pride, of optimism. Breathe it in. It's Buffalo. 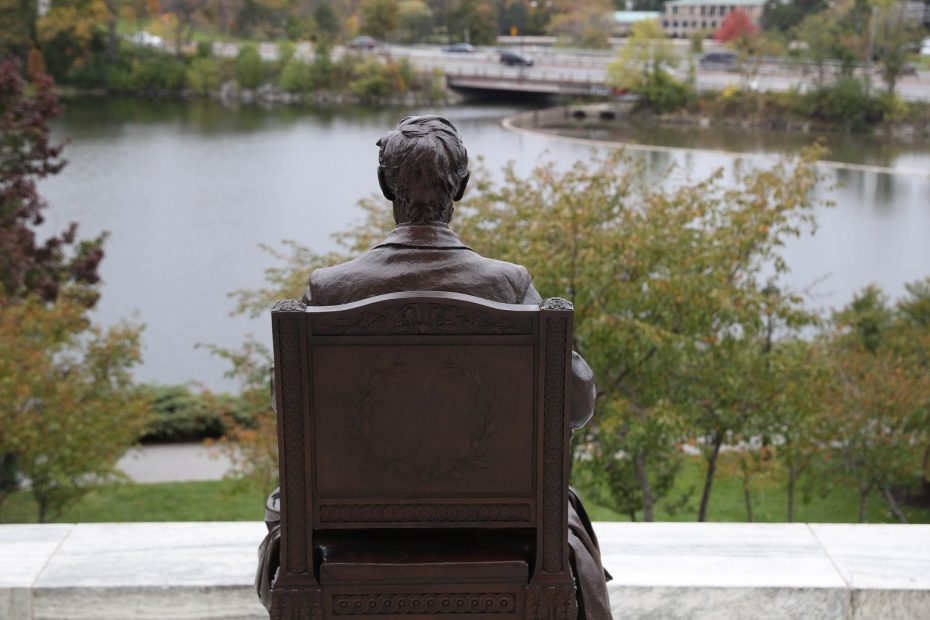 100-Plus Things: Amvets in North Buffalo