During the daytime, the new metal-clad building next to the Torn Space Theater on Fillmore Avenue is both workspace and a work of art.

But it's at night when the lit-up building comes into its own.

The perforated stainless-steel cube gives off a shimmering appearance from the beams of light projected from below. The metal cladding seals the building from the outside but also allows light to come through the interior, enabling the outside to be visible.

"We spent a lot of time and resources into really creating a signature structure," said Dan Shanahan, artistic director and the theater's co-founder with wife, Melissa Meola, the company's associate director.

"We felt a responsibility to do that because it provides this really interesting point in the triangle between St. Stanislaus Church and the Central Terminal."

Look closely and it's possible – depending on the light – to see the name of the long-shuttered gas station that was there before. Architectural consultant Christopher Romano, working for Rigidized Metals, a generous supporter of the project, photographed the original Gas Mart sign, put it through a computer system and in cutting out the perforated holes left a burned imprint of the original structure.

The new building is a major step forward for Torn Space, which has drawn critical acclaim for its adventurous avant-garde theater productions. The theater presents original performances and new interpretations of contemporary plays. The company has performed on-site since 2003, and also has created site-specific summer productions at Silo City since 2012.

The building, known as Light/Station at Torn Space, cost around $600,000, half the cost of the theater company's $1.2 million project. 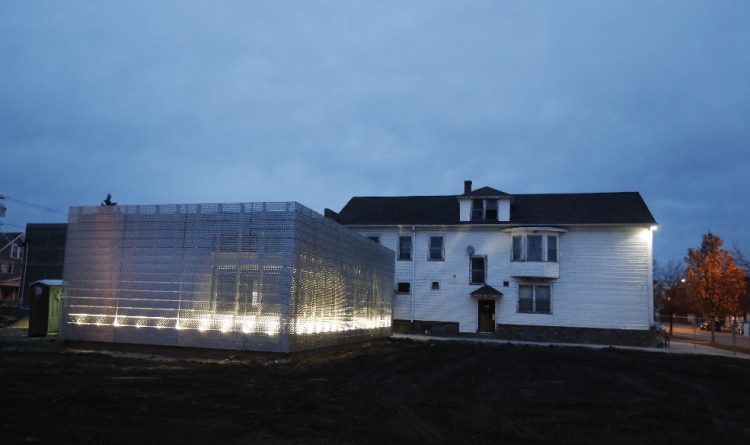 The Light/Station at Torn Space as night begins to fall. (Mark Mulville/Buffalo News)

The new space will offer a production studio, dressing rooms, conference area, green room, and set construction and load-in spaces. Green space, landscaping and an enclosed courtyard will follow by early summer 2018, when work on the outside of the adjacent 1918 Adam Mickiewicz Library and Dramatic Circle – part of which is leased to the theater – will begin.

The $400,000 project at the Mickiewicz building will result in a new theater entrance, entryway, new windows, restoration of the front facade, including replacing vinyl siding with plank wood, and a small outdoor cafe.

The Mickiewicz building also includes a social club formed in 1895. There's an early 20th century bar, and a second-floor library with first-edition Polish books available to scholars and researchers.

"They're a friendly group that gets along with everybody in the organization, and are really into their craft," Bob Sienkiewicz, an Adam Mickiewicz board member, said of Torn Space. "They also bring in business that helps sustain us, and we provide them with a very unique space that would be very difficult to find anywhere else."

The new building figures to turn heads as people walk or drive by.

Romano said he was asked "to make a spectacular facade" that would resonate for Torn Space but also add to the neighborhood's nearby architectural marvels.

The slightly misaligned inner and outer layers of 4-inch perforated panels allowed him to play with texture, light and shadow, and take the building's past form and identity into consideration.

Patterns were organized using the 72,000 holes that peer through the metal cladding.

"We studied them over and over again as to how the two patterns would mix together, and what kind of optical effects we could create," Romano said. "Nothing is random. It's highly precise and was studied repeatedly to give off at the end of the day a very minimal and controlled and calm effect."

Funding was jump-started by a $175,000 grant from the Buffalo Better Fund, part of the Buffalo Billion economic program. The Junior League of Buffalo and The Buffalo News contributed $275,000 from the proceeds of the 2015 Decorator's Show House.

"This is an effort that’s drawn on a lot of people’s time and generosity," Shanahan said. 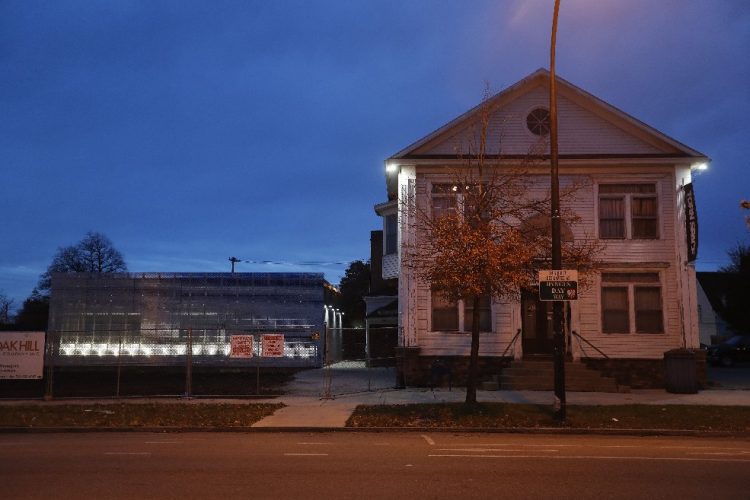 Another view of the Light/Station at Torn Space. (Mark Mulville/Buffalo News)

The project is also a testament to Torn Space's commitment to the area near the Central Terminal. Torn Space, at 612 Fillmore Ave., is one of only two operating theaters on Buffalo's East Side, along with the Paul Robeson Theatre.

"Some supported the project because of the artistic work, but I think a lot of people invested because of their desire to invest in this neighborhood," Shanahan said.

"It would be wonderful if this project encourages other organizations to get into this neighborhood and start to create a lot more of a critical mass," he said.

Beverly McLean, who lives a block from the theater and is president of Friends of Broadway Market, said she appreciates the commitment the theater group showed with its new building.

"Torn Space has also brought people from outside the neighborhood to their shows, which is positive," she said. "It's showing people are willing to come to the neighborhood despite whatever problems might be perceived."

"The tech riders demand a certain level of accommodation that we haven't had," Shanahan said, referring to a list of requirements agreed to in advance. "They have respected what we are attempting to do, but this is allowing us to accommodate that type of work."

"I just love the theater and what they are doing," Franczyk said. "They bring so much life to that community. We need that kind of creative flourish there."