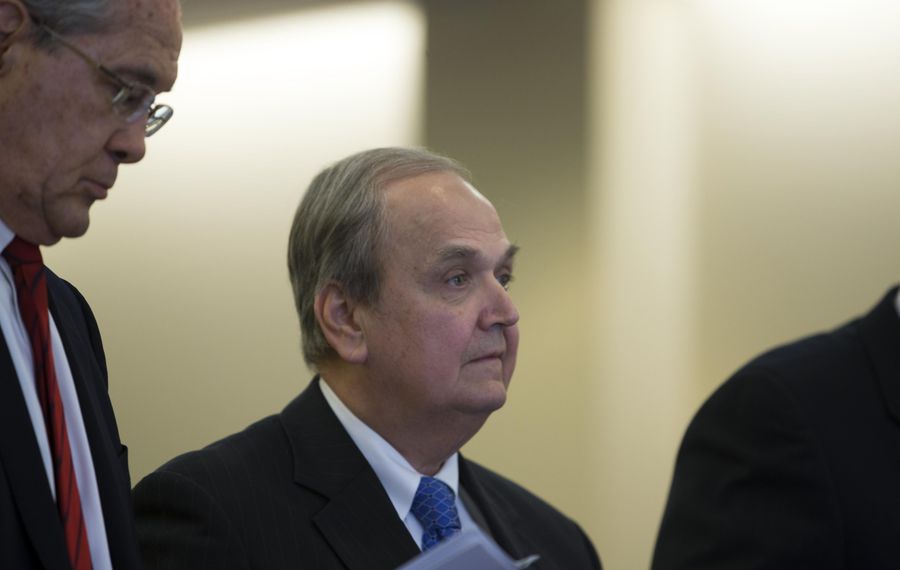 An Albany County judge has denied former Sen. George D. Maziarz’s motion to dismiss three counts of election law felonies in a scathing decision that points fingers at some of the top names in Niagara County Republican politics.

The decision brings to light much of what top Niagara County GOP figures disclosed to Attorney General Eric T. Schneiderman’s grand jury back in March, when his staff sought to prove that Maziarz circumvented campaign finance reporting requirements to hide payments to Glen S. Aronow, a former county legislator who had been dismissed for sexual harassment. Later, Aronow joined campaigns directed by Maziarz and the Niagara County Republican Committee.

The judge's decision also clears the way for Maziarz, the former king of the Niagara County GOP, to stand trial in Albany beginning March 2.

“It is the opinion of this court that dismissal would adversely impact public confidence in the criminal justice system,” Judge Peter A. Lynch said.

In his ruling, Lynch says the Maziarz claims of faulty grand jury proceedings (due to prosecutors’ failure to give proper accomplice testimony instructions) and the State Board of Elections’ internal musings over whether any crime was committed hold no weight in comparison to the evidence presented in the indictments. He said the personal opinions of Board of Elections personnel “are not controlling” once Schneiderman pressed charges, and that the state’s contention that Maziarz tried to disguise payments to a former staffer should be explored at trial.

“Based upon all the facts and circumstances of this case,” Lynch wrote, “this court finds that the interest of justice would not be served by dismissal of the indictment as a matter of law. Motion denied.”

Lynch, in fact, uses even more direct language in denying the motion to dismiss brought by Maziarz attorneys Joseph M. LaTona of Buffalo and E. Stewart Jones of Troy, especially with regard to the heart of the state’s case: that Maziarz and his “kitchen cabinet” used the campaign committee as a conduit to make unreported third party payments in a scheme that “undermines the integrity of the election process and is extremely serious.”

The judge also named several Maziarz associates in his decision and outlines their roles in the case. They include Henry F. Wojtaszek, the former Niagara County Republican chairman and one-time Maziarz confidant who pleaded guilty to election law misdemeanors in return for his grand jury testimony.

Wojtaszek is now president of Western Regional Off-Track Betting, and is even appearing in new OTB television ads.

Lynch also mentions Republican Assemblyman Michael J. Norris of Lockport, who succeeded Wojtaszek as party chairman. He said that in instructions to the grand jury, both were identified as “accomplices.” Other witnesses, most identified by The Buffalo News at the time of their testimony, included Aronow; Timothy Synor, owner of Synor Marketing; Syracuse political consultant Jack Cookfair; and Rick Winter, a longtime Maziarz associate.

While the Maziarz attorneys said Aronow was not present at the meeting where the “plan was conceived as to exactly how and who should pay Glen Aronow,” Lynch said the record indicated the former staffer knew the party would pay him for political work, but the money would not be reflected in campaign finance reports if it stemmed from Synor’s company.

“In this court’s view, Aronow could be considered an accomplice,” the judge said.

Lynch also noted that while Synor was not part of the plan, he hired Aronow at the request of Wojtaszek. He said that Wojtaszek testified that Winter paid Aronow, but that Winter should not be regarded as an accomplice. Still, the testimony indicated Synor received $49,999 from the party which, in turn, was paid to Aronow for work performed.

Maziarz political machine lines up to testify before grand jury

The judge held a different view of Cookfair, however, who has worked for decades on campaigns throughout New York and especially for the Republican Senate.

“Cookfair sent invoices for ‘consulting fees’ in the total sum of $46,000 to the NCRC and paid same monies to Aronow,” Lynch wrote. “Aronow did not perform any services for Cookfair. In this court’s view, Cookfair could be considered an accomplice in fact for conspiracy.”

Now, many of the same Niagara County political figures who testified before the grand jury are expected to return to Albany for the Maziarz trial in March.

“We are pleased with the court’s decision and look forward to proving the people’s case in court,” said Schneiderman spokeswoman Amy Spitalnick.