Jim Lorentz, born in Waterloo, Ontario, is someone with whom every hockey fan in Western New York should be familiar.  He spent his last six NHL seasons wearing No. 8 with the Buffalo Sabres back in the early to middle 1970s, enjoying his best seasons as a player. In 1974-75, he scored 70 points as the Sabres made it to the Stanley Cup finals against Philadelphia.

If that was too long ago for you to remember, Lorentz was also a color commentator for the franchise for nearly three decades, a role that may be more memorable for many. He retired from that position in 2007. He was inducted into the Buffalo Sabres Hall of Fame in 2010 and the Greater Buffalo Sports Hall of Fame in 2011. However, his most recent effort of creating memories involves fishing, an outdoor activity that has spanned most of his life.

Lorentz, 70, has a passion every bit as relentless as the inner drive that took him to the NHL stage. Fishing has been a part of his life ever since he was old enough to walk.

“My dad used to take me fishing in the ponds and brooks close to where I grew up in Waterloo, Ontario,” said Lorentz, who now lives in Hamburg. “We fished for all species. But once he took me trout fishing, that species became an obsession for me. My dad loved fishing but he was not a fly fisherman. I learned that on my own.” The passion began to grow.

“I started tying flies in the sixth grade. I remember collecting duck and goose feathers in the town park to use them as fly material. I have never stopped tying flies. In fact, when I played for the Sabres, I would often take my vise and fly tying materials on road trips and tie flies. This has been a lifelong pursuit and my passion for the sport has never diminished.”

Lorentz played Junior Hockey in Niagara Falls, Ontario, for the Niagara Falls Flyers, so he was already familiar with the area. And when he was traded from the NY Rangers to the Sabres in 1972, he couldn’t have been happier. He would have plenty of playing time on the young team … and he knew where a lot of the best fishing holes were!

Lorentz was already obsessed with fishing. However, after a Boston Bruins game in the latter part of the 1970s while playing with the Sabres, his fishing fanaticism would be taken to a new level after he was exposed to something completely different.  A fellow by the name of Roger Conant bullied his way into the dressing room at Boston Gardens to meet Lorentz. He knew Lorentz was a trout fisherman but shoved pictures of Atlantic salmon into his hands and insisted that he come and fish with him on the Whale River in the Ungava Region. He needed to catch an Atlantic salmon. 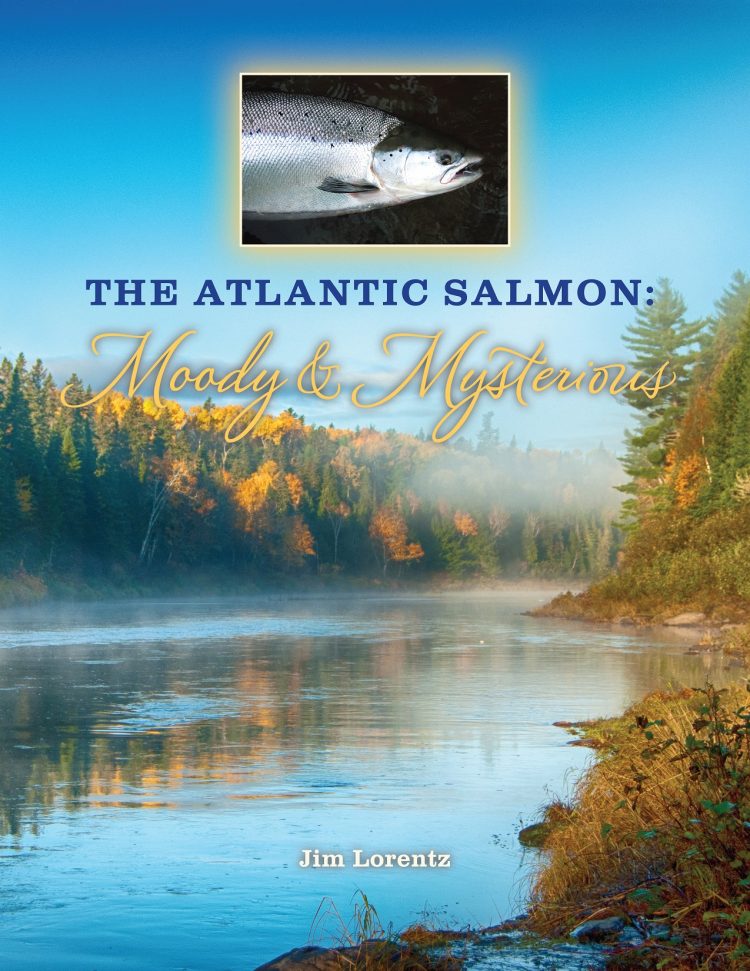 The following July, that’s exactly where he was – near the Arctic Circle in Northern Quebec. His first fish, a smaller one called a kelt, was unimpressive. He was disappointed. It wasn’t until his second salmon, a majestic 15-pounder full of energy and spunk, that his life was changed forever. This was the pinnacle. In his mind he had reached his angling nirvana. He compared the experience to his first NHL goal with the Boston Bruins and also winning the Stanley Cup with Bobby Orr and company. However, neither of those two feats left him “trembling and speechless.” He was hooked.

Lorentz was drawn to New Brunswick and the famed Little Southwest Miramichi River, a waterway famous for the salmon mystique. From June until the end of October, he was a student of the river … and the fish. He learned how and where to fish for them, staying at the Maramichi Inn while there. Then, 14 years ago, a home came up for sale on the river. He immediately bid on it and bought it. He couldn’t have been happier.

“Atlantic salmon are an obsession,”  Lorentz said. “They are so unpredictable, so moody. It’s never about the numbers of fish, it’s always about the total experience. And the fish really are beautiful. I am strictly catch and release.”

It was about a dozen years ago  when local fly fishing expert and author Rick Kustich asked Lorentz if he might be interested in writing a book on Atlantic salmon fishing through his book publishing company (West River Publishing) on Grand Island. While Lorentz was flattered, he told him that he just wasn’t ready yet. He would know when the time was right. 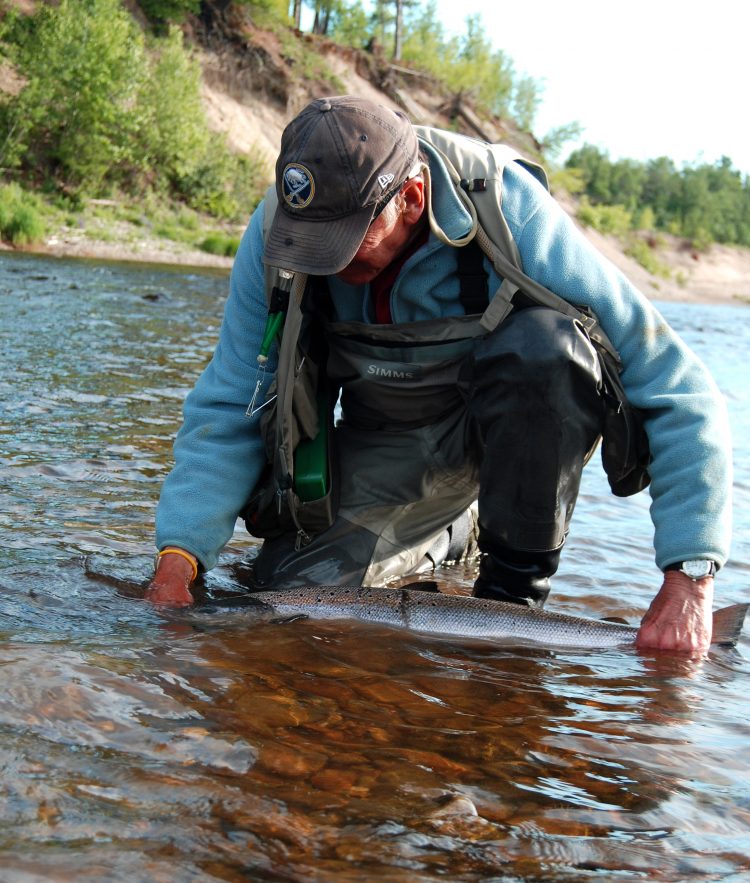 I knew Lorentz was a very good writer. I read several of his magazine pieces that he had submitted to the NY State Outdoor Writers Association Excellence in Craft contests in the early 1990s. One of his first was an article called “Day Dreams” that was published in the Atlantic Salmon Journal and he earned one of the coveted Bill Suitor carved decoys to take away the top prize. The carved merganser is still proudly displayed in his home. He was a natural and it wasn’t his only award for writing. The time would come for the book.

That happened about six year ago when he asked Kustich if he was still interested in a book on Atlantic salmon fishing. It took him about six years to write it, working on it from November to May … when he he wasn’t fishing for salmon. Slowly, the book began to take shape. Finally, West River Publishing released the long-awaited book “The Atlantic Salmon: Moody and Mysterious” by Jim Lorentz earlier this year.

The book is well-written. It captures the passion that Lorentz has for these special underwater wonders and for fishing in general. You come to realize he is sincere when he talks about the total experience. Reading this book will make you a better fisherman, whether you fish for Atlantic salmon or not. You will learn about Lorentz as a person as he takes you down his life’s path. He pens his insight and knowledge that few authors have shared, especially as it relates to Atlantic salmon. This should be on everyone’s list for Santa as we approach Christmas.

“I encouraged Jim to write a book on Atlantic salmon because his approach to fly fishing for salmon was different than almost anything I had previously read on the sport,” said Kustich. “He has a unique perspective gained from untold hours on the water. Jim is a tenacious angler and we can all learn something from the knowledge contained in these pages.” Signed copies can be obtained through Orvis – Buffalo at 4545 Transit Road, Williamsville.