From his youth days in Hamilton to his teenage days as an NHLer in Buffalo and as a 40-year-old hoisting the Stanley Cup, a career in hockey quickly flashed through the mind of Dave Andreychuk Monday night in Toronto.

As his father openly wept in the audience at Brookfield Place, the 22-year NHL veteran accepted his induction into the Hockey Hall of Fame in a speech highlighted by his family and his days with the Sabres.

Andreychuk's parents both worked in a Hamilton steel mill as he grew up before becoming a junior player in nearby Oshawa and a first-round draft pick of the Sabres in 1982.

"You don't have to cry, Dad. It's OK," Andreychuk said to his father, Julian. "They were with me day in and day out. My father was 30 years at the steel mill, then retired at 52 years old and has followed me around ever since."

Andreychuk revealed he spoke to his father every game night in a sort of ritual that lasted through his career.

"Every game day at four o'clock he got a call," Andreychuk said. "We didn't talk about that game that was going to happen. We talked about other things."

That included family. Andreychuk's wife, Sue, was a Buffalo native and their three daughters (Taylor, Caci and Brooke) were all born here.

Andreychuk thanked former Sabres coach and GM Scotty Bowman for drafting him in 1982. He scored 368 of his 640 career goals for the Sabres, third in franchise history behind only French Connection linemates Gilbert Perreault and Rick Martin.

"Great players in Buffalo. The 12 years that I spent there were exciting times for me," Andreychuk said. "I grew up in Buffalo. Lots of Buffalo friends are in the house. My girls were all born in Buffalo. I married a Buffalo girl. Good times in Buffalo. Really, really good times. Great players. Hall of Fame players. Gilbert Perreault, Phil Housley ... I grew up there."

Classy move by #Sabres to honor Dave Andreychuk in today's @TBNSports. Induction at 8 pm in Toronto on @NHLNetwork pic.twitter.com/aCFDYC2CbO

Andreychuk said he reveled in wearing a Leafs sweater and thanked the organizations of New Jersey, Boston and Colorado for his time there. He credited his wife for convincing him to go to Tampa Bay in 2001, where he captained the Lightning to a Stanley Cup in 2004.

"What happened in Tampa Bay was just magical," he said. "I get there with some young horses that were just phenomenal. I realized right away this team was going to be good.

"Our ultimate dream is to win the Stanley Cup. That's why we play. That happened for me. No chance you're thinking you're going to go to Tampa Bay and you're going to win. We did some really good things there." 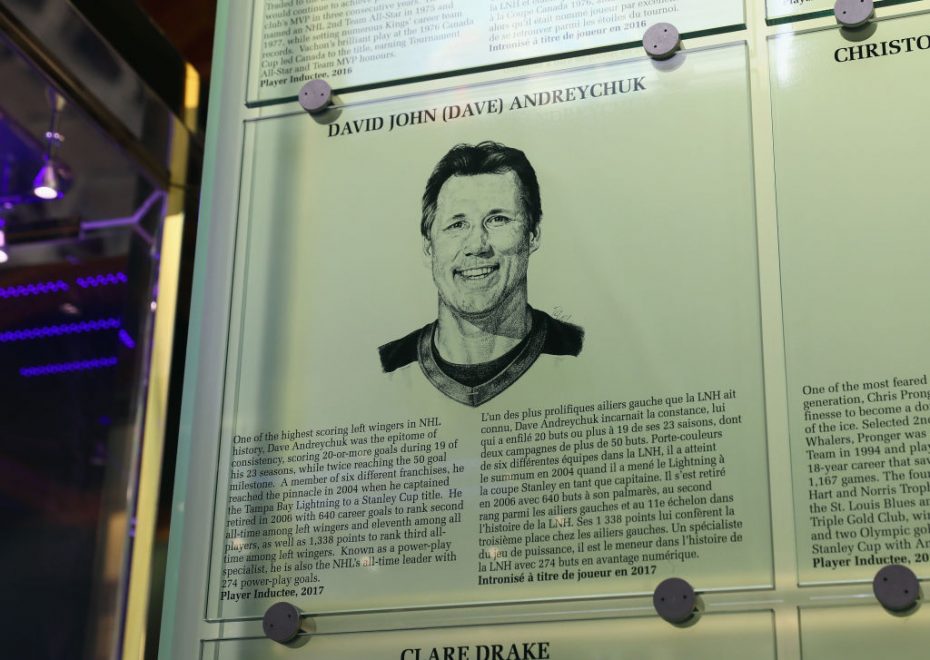 The Hall of Fame plaque for Dave Andreychuk is installed in the Great Hall at the Hockey Hall Of Fame in Toronto. (Getty Images)

Legendary Buffalo News Sports Editor Larry Felser once wrote, "Dave Andreychuk skates like wood" and Andreychuk has long admitted foot speed was not his forte. And as he joked Monday, Tampa Bay coach John Tortorella's analysis of his captain was that he was "slow as molasses but for some reason he gets it done."

Jacobs, 77, had special praise for current Boston stars Zdeno Chara and Patrice Bergeron, former player and current president Cam Neely and ex-Bruin Mark Recchi, who was a Cup champion with the Bruins in 2011 and was also inducted Monday. He also credited longtime Bruins executive Harry Sinden with being his mentor in the hockey world.

Jacobs thanked his wife, Peggy, and son, Charlie, who is the CEO of Delaware North's Boston Holdings that include the Bruins and is a key cog in the major development project growing around TD Garden. And he saved his highest praise for his late father, Louis Jacobs, who brought hockey to Buffalo in 1940 in the form of the American Hockey League's Bisons. They stayed for 30 years, until the birth of the Sabres in 1970.

"One of my greatest joys in hockey is that it brings together my large and geographically scattered family," Jacobs said. "To say I'm blown away by the size and strength of today's franchises is an understatement. I cannot even imagine what my dad would have thought."

Andreychuk is just the third player drafted by the Sabres to enter the Hall, along with former teammates Gilbert Perreault and current Buffalo coach Phil Housley. Andreychuk was drafted 10 spots after Housley was taken out of the Minnesota high school ranks.