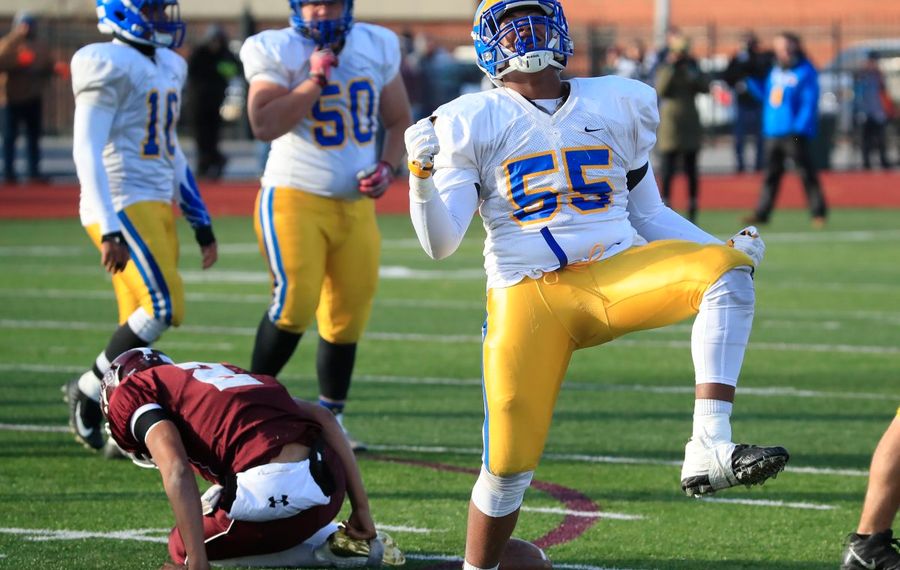 They cleaned up when it mattered most to help carry the Golden Eagles into the New York State Public High Schools Athletic Association semifinals for just the second time in their history.

Wahler scored two of his three touchdowns during the final 12 minutes while Javon Thomas also found the end zone on a third-and-long play as Cleveland Hill overcame a few potentially costly mistakes by finishing with a flourish in rallying to defeat Section V champion Caledonia-Mumford/Byron-Bergen, 38-20, on Saturday afternoon.

An estimated 1,500 at Eunice Kennedy Shriver Stadium at SUNY Brockport witnessed an entertaining Class C Far West Regional that finally swung Cleve Hill's way for good when Wahler took it to the house from 59 yards out on third-and-3 to give his team the lead, 22-20.  The Eagles scored the game's final 22 points.

Thomas followed with his second long touchdown of the game – a 46-yard run on third and long. Wahler capped the rally with a 91-yard run as the two combined for 354 of Cleve Hill's 414 yards. Wahler rushed 16 times for 212 yards, while Thomas had 10 carries for 142 as the Golden Eagles (10-1), winners of 10 straight, advanced to the final four, where they will face Central Region champion Skaneateles of Section III at 11 a.m. next Saturday at Union-Endicott High School.

"It was a great finish," Cleve Hill coach Glen Graham said. "I loved how our team came back. We competed right until the end. We always talk about when you play a game it's not always going to be perfect. You have to be able to overcome your mistakes and at the end make plays and we were able to make plays."

Oh, did the Eagles make plays.

Wahler's 59-yard TD came with 8 minutes, 59 seconds left and dented the feel-good vibe that had engulfed the Red Raiders (8-3), who escaped the first half being down only 16-13 even though Cleve Hill played well enough to have more than a three-point lead at the intermission. Wahler scored from the 1 and Thomas on a 60-yard dash during the opening 24 minutes.

The Golden Eagles had a few mental gaffes and also blew a couple assignments that led to two long touchdowns by Cal-Mum/BB.

When the Red Raiders marched down the field with the opening kickoff of the second half and took a 20-16 lead on Bryce Yockel's 2-yard run they had momentum. They were feeling good about themselves.

They were using the Golden Eagles' aggressiveness on defense against them with quarterback Anthony Maye burning them on keepers off fake handoffs and on short screen and swing passes. But the Golden Eagles figured things out and countered.

The biggest stops came just after they had taken the lead. James Purpura and Taylor Durkin combined to throw Maye for a loss of 2 on a fourth-and-1 run with 7:13 left. On the ensuing Cleve Hill drive, the Eagles didn't just milk the clock. They padded their lead on a third-and-16 play, which was Thomas taking it to the house on a 46-yard score on a run off right tackle.

Then, came the stop that basically clinched another week of football for the Eagles. Jelyn Parker and Wahler stopped a screen pass for a loss on fourth-and-3 with 2:02 left.

"I knew it was coming," said Parker, who made a team-high seven tackles. "I knew they were going to come back to me at one point. … It was great team ball."

Thirteen seconds later, Wahler scored on his 91-yard run to give the blue and gold faithful a reason to start celebrating the biggest victory of the season to this point a tad bit early.

"We were never down on ourselves," said Wahler, who was on last year's edition of the Eagles that dropped a tough two-point decision to Bishop Kearney in this round. "We've been down before against a Section V team going back to the U-Prep game (during the regular season). We knew how to come back. We weren’t worried at all. We knew if we stayed with the game plan and played together as a team we would always have chance to win this game no matter what."