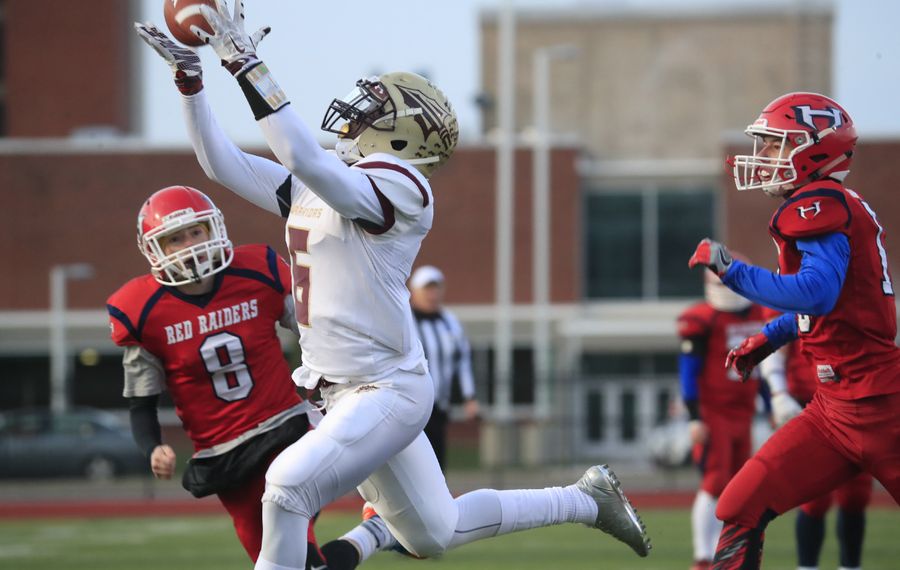 When Cheektowaga received the opening kickoff and took a look at what Hornell was doing defensively, right away the team saw a chance to exploit the defensive backfield.

The Warriors made Hornell pay early and often in Saturday evening’s Class B Far West Regional. Cheektowaga connected on two long touchdown passes and was set up on its other scoring drives with sizable gains through the air in a 28-6 win at Brockport State College.

The Warriors (10-1) secured the victory – and handed Hornell its first loss of the season – with the help of three defensive stands deep inside its own territory.

“We always try to take what the other team gives us and they were playing with no safety all night, so we had to make those plays and we did,” Cheektowaga coach Mike Fatta said.

Junior quarterback KeShone Beal, the game’s Most Valuable Player, was in on all four touchdowns, throwing for two of them and running for the other two. He finished with 244 yards passing and led Cheektowaga with 76 yards on the ground.

“He’s got a lot of physical tools, but what he brings mentally and with his heart and work ethic has helped him lead our team,” Fatta said.

Hornell’s defense rushed the 5-foot-8, 225-pound Beal for much of the game but he eluded tacklers – sometimes two and three at a time – to create a number of positive plays.

“It feels great to just keep moving forward and keep playing,” Beal said. “We played hard as a team until the final whistle. Some great route running by the receivers and great blocking allowed me to step up in the pocket and deliver.”

Cheektowaga held Hornell’s offense in relative check (291 total yards). Hunter Babcock a 205-pound senior running back who had 184 yards in Hornell’s Section VI final victory, finished with just 87, 53 on one second-half burst.
Fatta said the defensive line has been the strength of the team all season, but his linebackers also filled the gaps well.

“They’ve got some big backs over there so our guys were chomping at the bit this week to answer physically to what Hornell brought, and they definitely did that,” Fatta said. “Our goal was to make (Babcock) stutter once in the backfield and we thought if we did that we’d have the advantage. Except for that one run, it worked.”

On the opening drive of the game, Beal connected with senior Jaquan Bush on a 33-yard touchdown pass to put Cheektowaga up 6-0. Bush caught two of the team’s six pass plays that went for 19-plus yards. He finished with 75 yards.

The Warriors made it 14-0 before the end of the first quarter on a 6-yard run by Beal and Bush’s conversion run. The drive was set up by junior Lamar Reeves III’s interception at the Hornell 49.
“Coming in, we knew they were a big team, so we had to man up, do everything we could to stop them and get our offense out there to get some points on the board,” Reeves said.

The big strikes continued in the second half as Beal hit senior Keon White on a 44-yard pass on the last play of the third quarter to set the Warriors up at the Hornell 7. Beal finished off the drive on fourth down with a 2-yard touchdown run. White finished with two catches for 67 yards.

Beal all but iced the game, connecting with senior Tommy Zolnowski on a 70-yard touchdown with seven minutes remaining. Zolnowski finished with 89 yards on two catches.

Hornell got on the scoreboard with 3:36 left in the game when Luke Smith hit fellow senior Josh Stiles for a 23-yard touchdown.

Hornell turned the ball over on two of its first three possessions before putting together a long drive done in by a pair of illegal procedure penalties in goal-to-go situations. The Red Raiders drove again later in the half and were stopped on fourth-and-2 on Cheektowaga’s 8 when Caleb Graves broke into the Hornell backfield.

Hornell was threatening to cut into Cheektowaga’s 14-point lead midway through the third quarter but had a seven-play drive halted at the Warriors 7.

Cheektowaga senior Jonathan Banks also recovered a fumble in the first half and junior linebacker Taivaughn Roach led the team with 12 tackles (10 solo). Cheektowaga also turned the ball over twice in the opening half, but the defense made sure it did not come back to haunt the team.

“Everytime we’re on the field and we’re backed up to our 20 or 10, we all come together to talk and remind each other to stick together so we can make a stop and get our offense back out there,” Reeves said.

“It’s very big,” Beal said. “It’s one step forward. We just want to keep winning and winning until it’s over.”