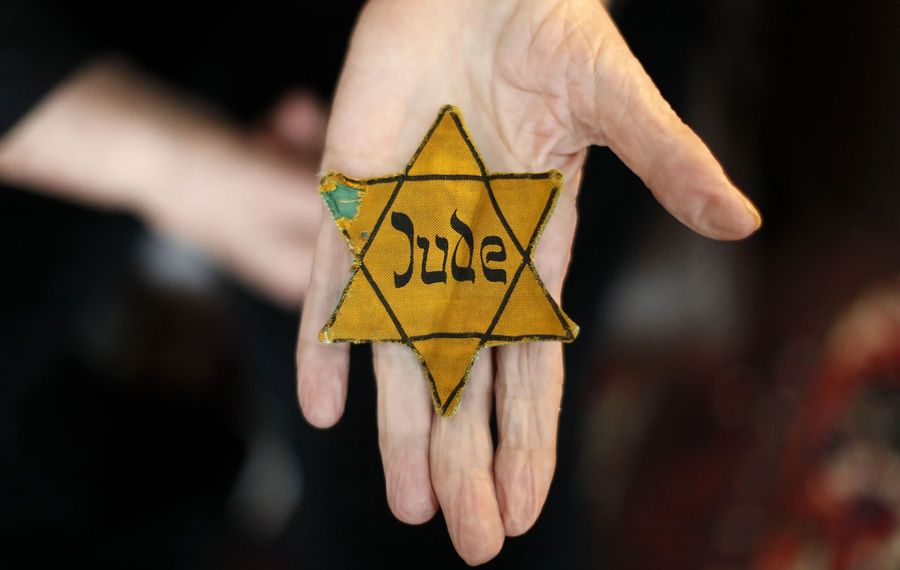 What happened is known as Kristallnacht, "the Night of Broken Glass."

Nazis unleashed horrific violence throughout Germany and in parts of Austria and Czechoslovakia during that 48-hour period.

They smashed the windows of 7,500 Jewish shops and looted the businesses. Some 267 synagogues burned down. The Nazis attacked homes and desecrated Jewish cemeteries. They rounded up close to 30,000 men, sending many to concentration camps.

It all happened 79 years ago.

In April, The Buffalo News told the stories – in words and in the photographs of Mark Mulville – of 28 survivors. Since then, four more have shared their stories.

The anniversary of Kristallnacht is a fitting time to hear them.

Jutta Lewkowicz was sent to a forced labor camp in Dortmund, Germany.

Genia Rossi endured the suicide of her mother, who feared being sent back to Nazi-occupied Ukraine to be shot.

Anna Post narrowly escaped death, even after being handed a shovel to dig her own grave.

All four women overcame horrific trials to start new lives in Western New York. As survivors, they are in many ways the lucky ones.

[Survivors of the Holocaust in Western New York]

But they share a painful history with others who remember the horrible sounds that night of broken glass.

After Kristallnacht, Jews suffered from dozens of anti-Jewish laws immediately passed afterward. The new laws banned them from public places and prevented them from working in their professions or attending public schools.

The German government, claiming shop owners were at fault for the looting and broken windows, prevented them from seeking insurance claims.

As the world later learned, an estimated 6 million Jews were murdered in the Holocaust -- around two-thirds of all of the Jews then living in Europe.

The displays, which recall this terrible period and also celebrate the survivors' resilience, is being held all month in the Butler Library lobby. Support for the exhibit came from the E.O. Smith Arts & Humanities Faculty Development Fund, the Buffalo Jewish Federation and The Buffalo News.

Anna Post witnessed unspeakable brutality and escaped death at the hands of the Nazis on more than one occasion before reaching adulthood.

The former Anna Dula, the youngest of six siblings in a religious Jewish family, lived in a small city in Poland when the Nazis invaded the country in 1939.

The rights of Jews were stripped away with the enactment of anti-Jewish laws, which including wearing yellow armbands with the Star of David when in public. Their movements were restricted, and living conditions grew harsh. 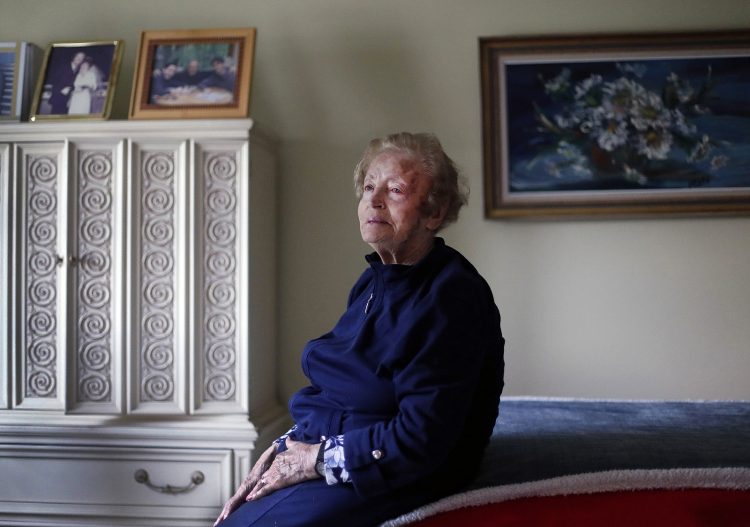 In December 1941, the 17-year-old Post took a train to Warsaw to smuggle food to cousins who were in desperate need. After someone recognized her, she was taken off the train by a member of the Gestapo. Her punishment for impersonating a non-Jew was death.

Post was given a shovel to dig her own grave.

"I started to dig and was thinking I was really sorry for my mother. She didn't want me to go, and I didn't listen. She's going to cry and cry," Post remembers thinking.

When darkness set in, Post was sent to a jail cell and told her execution would wait until the next day.

"We were living with death, so I wasn't really worried," Post said. "You get used to these situations. A shot only takes a second."

She woke up resigned to death.

"I said goodbye to life, and goodbye to the sun," said Post, who taught at the Kadimah School in Snyder for 30 years. "But that morning, I found out the Jewish Council had made a bribe -- a pair of boots for life. How cheap life was."

Jutta Lewkowicz heard the glass shattering and the screaming that horrible night of Kristallnacht.

She also heard the knock on the door, as the Gestapo came to take away her father for questioning. And she took a beating from Hitler Youth kids who dropped her onto a nail that ripped open her leg when she was only 10 years old.

But Lewkowicz also knows how lucky she was. "I am a fortunate girl, because we all survived the war," she said of her family in a video for the local Holocaust Resource Center. 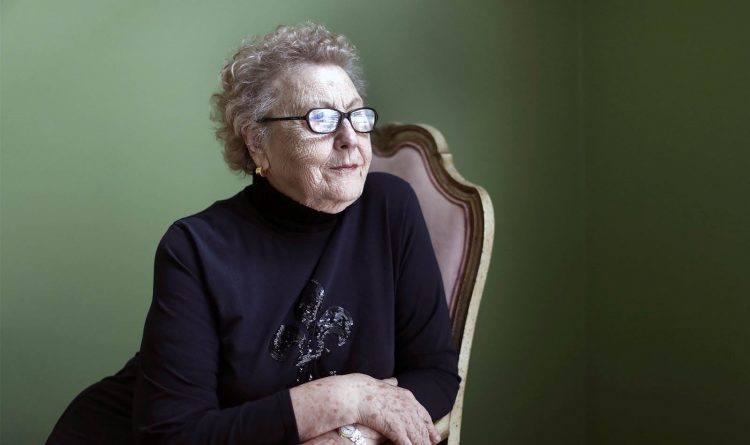 Lewkowicz described life in a forced labor camp in Dortmund, Germany, where she spent 2½ years before being liberated in 1945.

One job was cleaning cement off bricks that would be used to rebuild bombed-out buildings; if the bricks didn't look like new, the young women were beaten. Their food – "if you can call it food" – typically consisted of a little bread and a bowl of spinach soup.

"When you put the spoon in there, you could hear the dirt on the bottom," she said.

Lewkowicz was a young teen, one of 35 women sharing one room.

"We melted snow outside when the faucets were frozen, and we took turns taking a bath," she said, 35 women first bathing their upper bodies, then their lower bodies, all from the same pail.

Like many other Holocaust-era survivors, Lewkowicz knows others had it much worse.

"It was a terrible time for me, because I was 14 or something," she said. "But it was not an extermination camp."

Even before Genia Rossi was born on a collective farm in western Ukraine in 1934, her family had survived the imposed famine, the "death by hunger" that claimed some 3.9 million Ukrainian lives.

During World War II, the Nazis, who considered the Ukrainians "sub-humans," invaded their villages, stealing valuables, burning everything and removing the men, who never were seen again, according to the book "Genia: The Journey from Despair to America," by Rossi's daughter, Grace A. Clark. 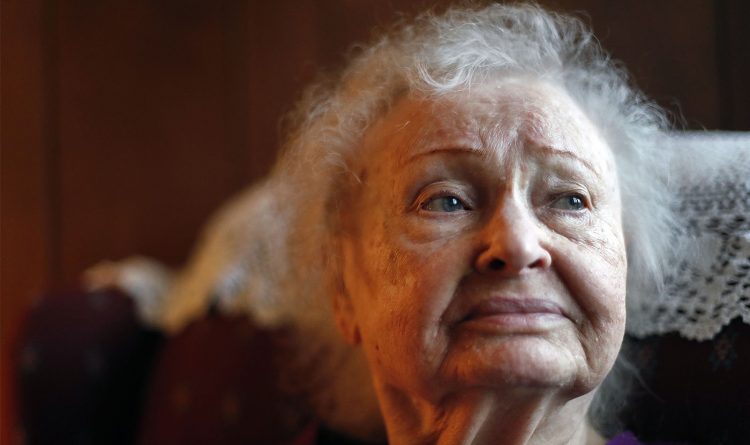 Thanks to their blonde hair, Rossi and her mother were spared death.

They were sent on a 570-mile railroad journey into Germany, where boxcars stopped at every farm, letting people out two by two to work as farm laborers. For seven years, mother and daughter worked at a German farmhouse.

Rossi, who had become deaf as a toddler, received no formal education. Her mother eventually hanged herself after hearing she would be sent back to Ukraine and shot. Rossi later was taken by motorcycle through a German forest where she was stopped by an American soldier in 1946. As a deaf, pre-teen orphan, she spent two years in four refugee camps in the American Zone of Germany.

In 1949, Rossi was sponsored by the family of Robert Cornelius, former vice president of Sattler's department store in Buffalo, and later sent to St. Mary's School for the Deaf.

"In my mind, I never knew what had happened to my mother until she gradually let the details out when we were older," Clark said.

Ten years ago, family members took a trip to Germany. As they arrived in Munich, Rossi burst into tears.

"What's wrong?" Clark asked her. "I wish we could find my father,” Rossi said.

Sophia Veffer's life during the Holocaust resembled Anne Frank's. Starting at age 10 or 11, Veffer moved from apartment to apartment in her native Amsterdam, Holland, hiding in 11 different homes, anything to stay one step ahead of the Nazi killing machine. Veffer ultimately survived when the Allies liberated the Bergen-Belsen camp in April 1945.

Anne Frank wasn't so fortunate. In September 1944, she was taken on the last train from Holland to the Nazi concentration camps, where she died from typhoid and malnutrition.

"Of course, her story is different from mine, because I'm sitting here and she isn't," Veffer said at an Erie County Bar Association event in 2015. Shortly after the war, when Veffer was hospitalized, a doctor gave her Frank's recently published diary, which Veffer brought to Temple Beth Zion in Buffalo, to be put on exhibit. 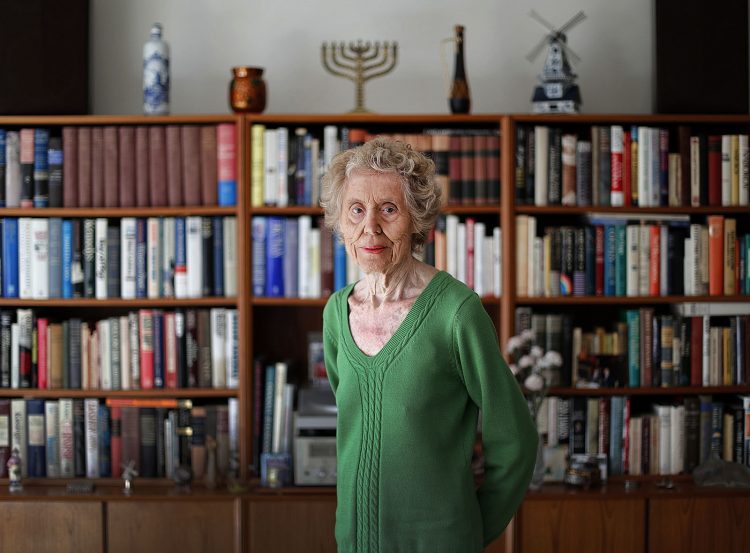 As a key member of the local Holocaust Resource Center's Speakers Bureau, Veffer often shares her Holocaust experience, reminding people of the stark numbers: 6 million Jews killed, along with another 5 million "undesirables" – gypsies, blacks, homosexuals and the disabled. She always urges young people to be "upstanders," taking a stand against injustice, rather than bystanders.

Veffer cares passionately about how that story is told.

"I don't want to be a victim," she said. "I made a very good life. Most of the survivors have very rewarding lives."