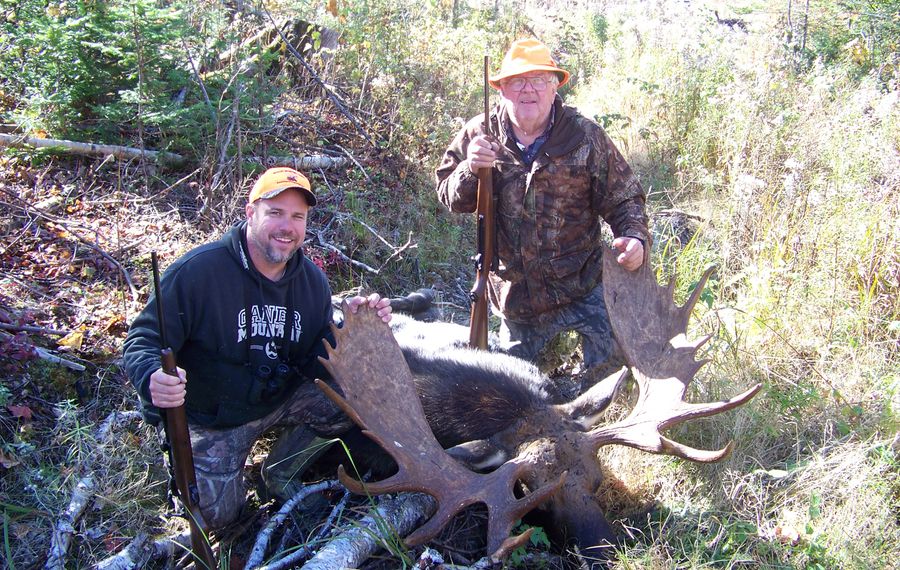 It starts in the winter and early spring when big game enthusiasts apply for special permits and tags to be given the privilege to hunt for a much-desired animal. Moose, elk, mule deer, whitetail deer, black bear and more – the list of North American big game is a long one. When that person is notified that they were successful in obtaining a tag, the dreaming really begins. Big game hunters head to their magical destinations in their minds first, places that they have read about in magazines or watched on television and the Internet.

For many, it may be a bucket-list hunt that will be a once-in-a-lifetime opportunity. As the autumn colors start to fade and the leaves begin to fall, timing can be critical. Mother Nature can throw a curve ball with nasty weather … or weather that is too nice. You have to take what you get, though, and make the most of it.

For Christopher Lux of Alden, it was the call of the Maine woods that pumped his adrenaline. His mother is from Maine and the first time he experienced a hunt there it was for moose in 2009, the same year he applied for his first non-resident tag. That was lucky. It’s not easy being selected. For example, in 2017 there were only 2,080 permits available to hunters and only a small percentage are for nonresidents. He managed to take a small 2-1/2 year old bull with a diminutive rack the first time. He wanted something bigger … and he wanted to go this year.

“I had a little extra cash and I thought it was a good opportunity to be selected this year,” Lux said.

He was right. He was allowed to add one person as a sub-permitee and he selected Steve McNelly of Lisbon, Maine, (his cousin). He also hunted with friend and caller Tom Berube of Poland, Maine, owner of Tom’s Avian Taxidermy and Mike Broadbent of Lisbon, Maine.

Lux was selected for the hunt Oct. 9 through Oct. 14. Their plan was to stay at Boulet Sporting Camp in the Maine North Woods and hunt themselves without a guide. On the very first day of the hunt, Lux and company called in moose within 30 yards. However the rack was smaller and they opted to hold off and wait for something bigger. When the calendar reached Friday the 13th, they began to second-guess their decision. Driving along a logging road miles from civilization, they spotted a big bull with less than an hour left to hunt. They managed to move into position, just 80 yards away. Lux and McNelly both shot at the same time, Lux using his Savage .30-06 rifle. That was all it took to down the animal, dressed out at 826 pounds. The green score of the rack was 180-6/8, making it the largest taken in the camp so far this year.

“The best part of the hunt is we did it ourselves,” Lux said. “Enjoying the time spent with family and friends, too.”

Jim Monteleone of Williamsville always wanted to head out to Big Sky country and hunt for mule deer.

“Montana has everything a hunter could ask for – diversity of game, landscapes and opportunities to experience western culture.” He was going to be hunting with his brother Monty from St. Louis, Mo., making this hunt even more special. 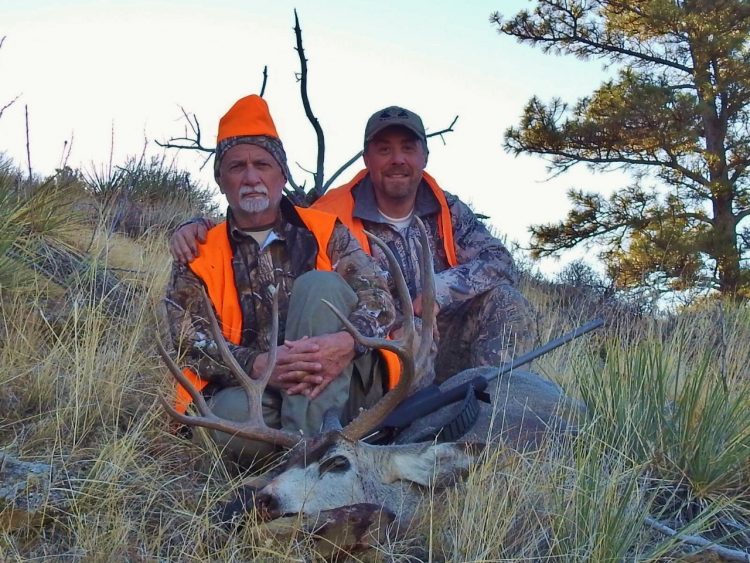 Monty Monteleone of St. Louis with this 160 class mulie taken while hunting with Jeff Jerome (right) of Boston, N.Y., proprietor of Deep in the Bush Outfitters. The deer weighed 250 pounds.

The Monteleone brothers contacted Jeff Jerome of Boston, N.Y. His Deep in the Bush Adventures (www.deepinthebushadventures.com, (716-435-5141) takes most of the guess work out of planning for the trip, including applying for the necessary tags by the deadline in mid-March. Yes, you need to plan that far in advance. The hunt was set for the end of October.

Jim prepared for the outing by taking range practice with the objective of a 200-yard zero hold-over. It would pay off.

“The terrain was challenging,” said the Williamsville resident. “Good populations of deer made for a memorable hunt with opportunities to pass on lesser deer from 100 to 300 yards out. Very good whitetail deer populations coupled with exciting numbers of antelope offered us quite a few options in southeastern Montana.”

Their lucky day was Oct. 29. Both hunters were successful. Monty tagged a 4 by 5, 160-inch class buck with an impressive 500-plus yard shot using a .300 Winchester Magnum caliber with a 16-X scope. It field dressed at 250 pounds. Jim was using the same gun, anchoring a decent 3 by 3 buck that tipped the scales at 215 pounds. His shot was “only” 255 yards. Jerome comes highly recommended.

Pat Needle of Burt has always wanted to hunt monster whitetail bucks in Saskatchewan. They grow them big up there, primarily due to the severe winters in this remote Canadian province. When the opportunity arose to take a hunt, he jumped on it. Now he will be singing the Guess Who song “Running Back to Saskatoon” until he returns in two years – it was that good.

It started with Ken Young of Youngstown winning a trip with Buck Paradise (www.buckparadise.com) in Saskatchewan. He just needed to bring along some hunters to complete the package. Young’s son Brandon jumped on board as did Needle and his son, Ray. Pat’s nephew Shane joined the group as did Mike Stachowiak of Eden. They were about to embark on a very special journey. 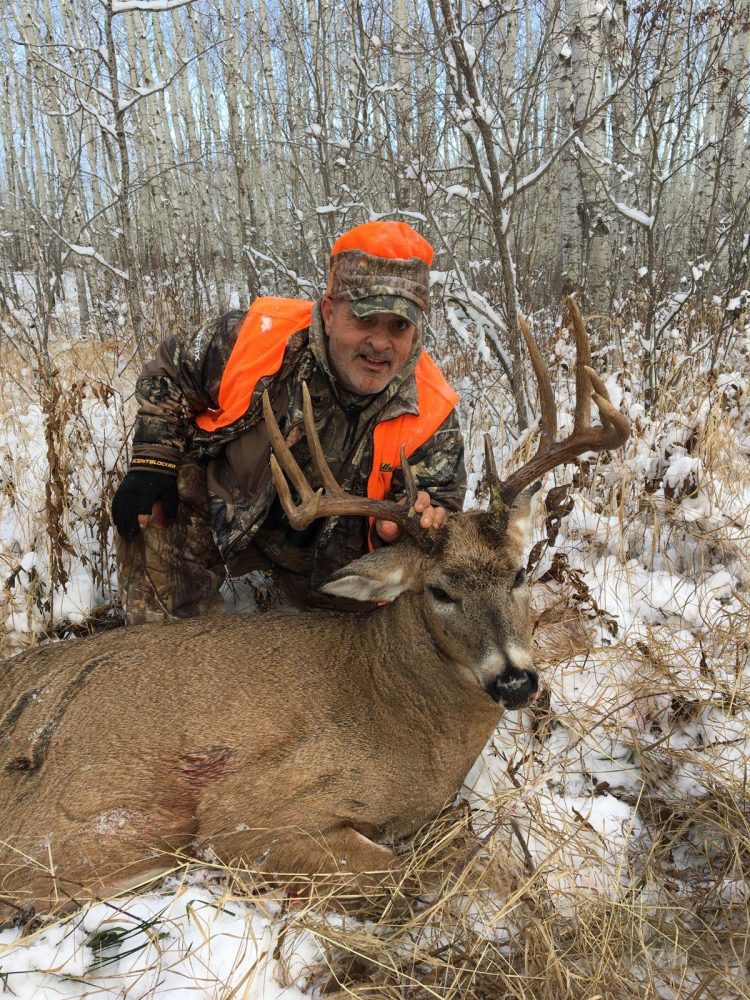 Pat Needle of Burt shows off his 280-pound 10-point buck he took in Saskatchewan last week while hunting with Buck Paradise Outfitters. The rack scored 148 inches.

Once they were situated in Paradise Hill Lodge, they found out how remote of a location they were in. It took them over 2 hours to motor to their stands each day. It was already winter-like conditions.

“We would get into our blinds and we could hear the wolves howling,” said Needle.

In the end, everyone was successful. Every deer weighed over 200 pounds and the smallest rack was an 8 pointer that scored 130 inches, taken by Ray. The biggest was a 172-inch 10-point buck that tipped the scales at nearly 300 pounds harvested by Brandon. The rest were all 10 pointers: Pat with a 148-inch buck that weighed 280 pounds, Shane with a 146-inch buck, Mike with a 144-inch buck and Ken with a 154-inch buck. Ken used a muzzleloader to capture his memory.