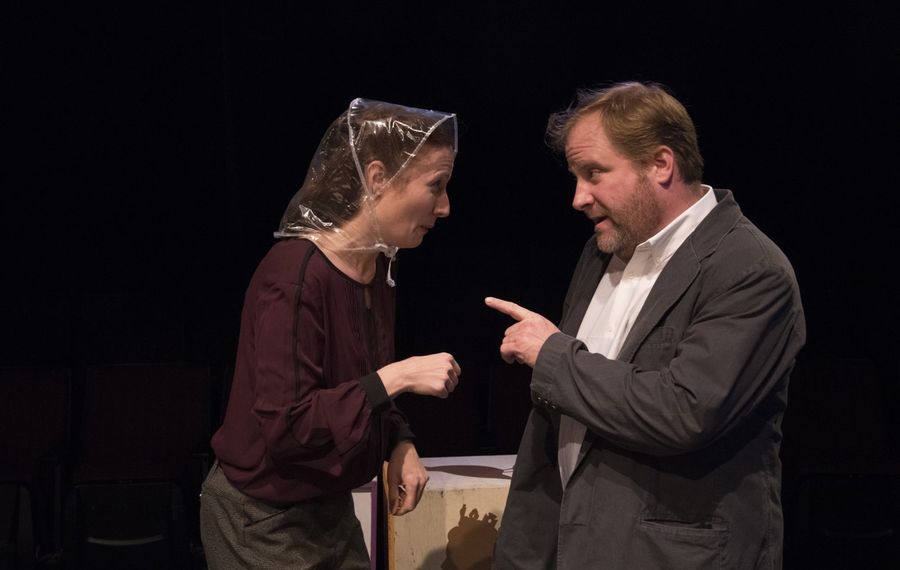 The "Babysitting Mafia" of Maeve Binchy's "Minding Frankie" is relegated to background noise as the popular Irish author's hefty novel moves to the stage. Instead of Binchy's cast of dozens raising little Frankie in a Dublin neighborhood, we have the baby's father, Noel, parrying efforts by one person -- a no-nonsense social worked named Moira -- to find him unfit and take away the only good thing he has in his life.

There are times when we miss all the book's helpful friends and neighbors during the production now onstage at the Andrews Theatre.

Presented by the Irish Classical Theatre Company, the opening act of "Minding Frankie" feels thin at times, as Christian Brandjes and Kristen Tripp Kelley work on bringing Noel and Moira to life, only to interrupt the process by becoming other characters talking to their own main selves and adjusting the set.

It's easy enough to accept Brandjes as Noel's boss, puffing himself up while talking to the air to warning invisible Noel off the drink. Kelley has a harder task, switching from a pitch-perfect embodiment of Stella, the dying woman who is pregnant with Frankie, back to prickly Moira, addressing the empty space that Stella is imagined to hold. We kind of want our Stella back, because that's where the connection is.

The most touching moments for Kelley come when, as a pregnant, dying Stella, she tells Noelhe will need to raise the child she is carrying --  the product of a brief fling that Noel, for all his trying, cannot remember ever consummating.

The play's theme is summed up when Noel asks Stella if she is sure the baby is his and she ferociously responds, "You think I have a list? And if I did, would I pick you?"

Even Noel -- a do-nothing drinker -- has to agree: of course not.

But Stella is right in seeing that Noel has good in him, and eventually Noel realizes it, too.

The problem is that Moira does not. Fighting personal demons of her own, she immerses herself in efforts to find Noel unfit so she can place Frankie with a "good and stable" foster family, a family with a loving mother, unlike her own cold upbringing.

While we find ourselves rooting for Noel, it's hard to sympathize with Moira and her lonely crusade. As her other supporting characters, Kelley is animated, comical and caring, but her Moira has a coolness that borders on cruel. Its a tough sell, even when she could really use a hug.

Brandjes has the more comfortable job. We are willing to forgive Noel's relapses into drink so long as he climbs back out of the glass because his concern and love for Frankie seem so real (even though the babe only appears as an invisible shape in Noel's arms).

By the end, we do wind up caring about them all to some degree. Binchy and Linehan both respect that people are human and everyone has faults, and while those faults create the conflict for the play, they also are at the heart of its comedy.

The laughs and chuckles keep the tale grounded and, by the time Noel becomes a quite-capable single mother, they carry us along to a resolution that, while not exactly earthshaking, works just fine.

Through Nov. 26, presented by the Irish Classical Theatre Company in the Andrews Theatre, 625 Main St. Tickets: 853-4282 or at irishclassicaltheatre.com.