When you hear "young authors," you imagine children tapping away at keyboards or bent over paper, pens or pencil in hand, creating a world with words.

You don't picture smock-clad youngsters covering sheets of paper with layers of paint, then inscribing the smooth surface by dragging plastic cards, wide-toothed combs and even a tiny hand-shaped back scratcher through the paint.

But there they were, a group of 14 young writers in third through eighth grade, learning an ages-old Japanese technique for creating patterned paper.

The foray from words to visual arts was important because when the Writers' Studio Program of Niagara University’s Family Literacy Center ends in early December, the children won't be just authors, they will be bookmakers.

"The goal is to allow children the opportunity to explore story, and for them to actively use their imaginations and develop stories that eventually become what we call a written masterpiece," said Kathleen McGrath, an associate professor at Niagara University and director of the Family Literacy Center.

The written masterpieces, which in previous years have been handwritten into blank books or produced in a digital format, this year have an added artistic element.

In this, the second year of the Family Literacy Center's collaboration with the Castellani Art Museum of Niagara University, the Writers' Studio students were led by Carla Castellani to create the patterned sheets, which will be used to form the covers of their written books.

"Since their project is a book, we thought of bookmaking," said Tara Lyons, adjunct professor and Curator of Education and Collections at the Castellani Art Museum.

So they called upon Castellani, who recently retired from teaching fine arts at Niagara University. She is the daughter of Armand and Eleanor Castellani, founders of the museum that has hosted the young writers and many other classes, events and activities.

"The students are excited because they know that Carla's parents were responsible for this amazing space," said Lyons.

During the session, as the youngsters washed their dampened paper with paints, then inscribed designs into the colors, Castellani moved from table to table with hints and tips. 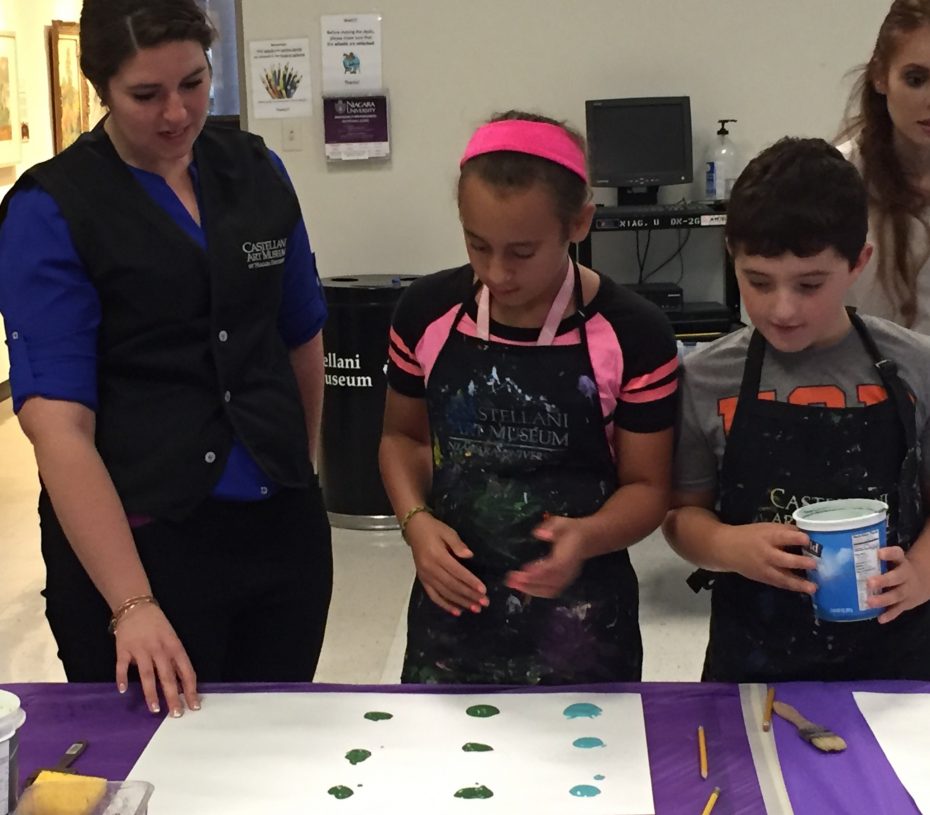 Tyasia Winn, 10, of Niagara Falls, chose dots of aqua and green as a starting point while grad student Maegan Zeller provided encouragement. Grad student Callie Woodward assisted Rya Anastasi, 9, of Wheatfield, who covered a page with horizontal swaths of baby blue and bright red, with some yellow and orange between. Ryan's tools for making a pattern in the color included a miniature hand on a long stick that was made as a back-scratcher.

For Ryan Felicetti, 8, of Niagara Falls, the patches of color were just a starting point for a bold circular design with rays emanating. His grad student assistant was Ashley DeGraff.

For the budding authors, the museum goes far beyond a place to work with paint in a classroom. McGrath and Lyons use the galleries as both an inspiration and a workspace for their young writers.

"We find the context of the Castellani Art Museum to be such an impetus for the ability to explore their imaginations," said McGrath. "When all of us walk into the museum, there's just a certain something to the atmosphere there that just allows children a place to dream, explore and create." 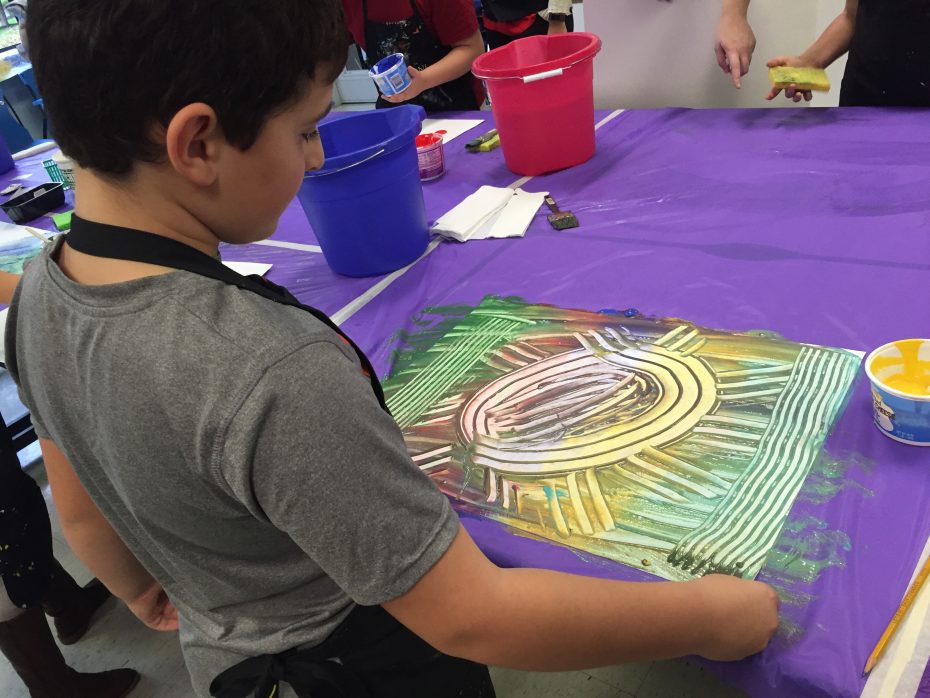 Ryan Felicetti, 8, of Niagara Falls, used his painted sheet as a backdrop for a bold circular pattern. (Photo by Anne Neville)

This is the fourth year that the young writers have gathered, and McGrath said she has been impressed by the depth of their interest and the topics they choose. Far from all superheroes and cartoons, with encouragement from the grad students in the program, the youngsters let their imaginations soar, she said.

The program begins with an assessment of the young writers.

"We assess the children's reading and writing abilities, and we also assess their interests, and we try to group them according to ability and interests," McGrath said. A group of three or four children will be assisted by three or four graduate students in the advanced literacy program, all certified teachers who are working toward master's degrees and certification as literary specialists.

This age group was chosen, said McGrath, because "school-age children tend to have wonderful imaginations and it's a very ripe time to provide this enrichment."

Lyons said making art is valuable because it breaks down barriers to creativity. "Art-making gives young people a safe way to communicate what's going on around them, it gives them a creative outlet to release any energy that they may have that they can't get out physically or they are not able to express academically," she said. "It also just enforces creativity and imagination in kids, telling them that it's OK to go beyond the realm of reality, to use your imagination to be different and to take your ideas that might seem crazy and put them down in some way that other people can look at."

The gallery has offered options for youngsters to work far beyond the usual classroom desk or table. "They have allowed us access to all the rooms in the art gallery, so the children and their teachers find a spot where they feel comfortable," said McGrath. "Sometimes I find them sitting on the floor together, there are tables in the gallery and sometimes I see them sitting there, sometimes I see them walking around and talking, it's like they are creating the talk that then evolves into something in writing."

In the writing portion of the class, the children start off by writing shorter pieces, then select one piece to further develop.

The final books, which the class leaders describe as "written masterpieces," will be celebrated at an "authors' tea" set for early December, at which the young writers share their works with invited family and friends and the Niagara University community.

"Tara Lyons and I work closely to create this beautiful atmosphere," said McGrath. "We have music playing, a slide show of all the different moments across the semester, we serve punch and cookies, and the children are free to pick an area in the museum to share their work."

Although the graduate students change every semester, some of the young writers have participated more than once, said McGrath. In fact, she said, "We have had some three-peats. They are really enjoying it."