Travaris Cadet spent all of last year with the Saints, as well as the 2012, 2013 and 2014 seasons. The Bills signed him ahead of this week’s meeting with New Orleans, but his familiarity with the opponent seems like a much smaller factor in the decision than his versatility.

Cadet was brought in to replace running back Taiwan Jones, who broke his arm while attempting to recover an onside kick against the Jets and was placed on injured reserve. Jones, a core special teamer, was only on the field for three offensive plays this season and didn’t have a single carry.

But if you ask Cadet what type of player he considers himself, it seems he, too, may be a running back in name only.

Coming out of high school, Cadet was one of the top-ranked dual-threat quarterbacks in the country. Rivals.com had current Bills quarterback Tyrod Taylor No. 1 in the 2007 class; Cam Newton was second and Cadet was 19th. Dolphins quarterback Ryan Tannehill and Eagles receiver Torrey Smith ranked in the 20s.

Both Taylor and Cadet were recruited by Virginia Tech, but Taylor, who is from Virginia, committed first. Cadet ended up at Toledo and eventually transferred to a junior college and then FCS-level Appalachian State, where he was a wide receiver and backup quarterback who also returned kicks, just to get the ball in his hands as often as possible. Then one day during a preseason practice, something weird happened: All of the running backs kept getting injured.

“They put me back there because I had a broken thumb,” Cadet said, “and then that was all she wrote.”

Cadet went on to named all-conference at running back that season despite never playing the position before. He wasn't sure what awaited in the pros. 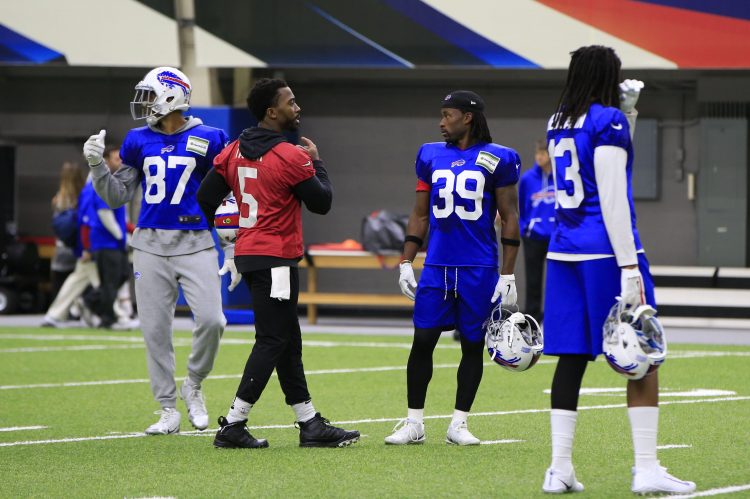 “Coming into the league, a lot of people said I’d be a one-position guy,” Cadet said. “Some teams said one position, some teams said multiple positions. I ended up at New Orleans, where the versatility factor in that offense stands out a lot – the more you can do, the longer you stay around. And those are the type of guys they like: Guys who can get in the slot, guys who can cause matchup problems, guys who can run the ball, guys who can pick up blitzes, guys who are smart, guys who work hard and are dedicated. And I’m pretty sure it’s the same here.

“Regardless of what I was, I knew I was going to be ready to do whatever, whenever.”

Cadet stayed on the field after Monday’s practice to run routes with Taylor. They train together in the offseason, so it wasn’t their first time working together, but it’s a good connection to have. Cadet considers himself a Swiss army knife of a football player, and receiving may be his best tool – he has never been asked to carry more than three times in an NFL game, but he owns a career average of more than 8 yards per reception.

Bills coach Sean McDermott mentioned Monday that he liked Cadet's "multidimensional" skill set. Cadet was thankful the Saints organization found a way to utilize his skills, and hopes the Bills can do the same Sunday against his former team.