Since 2012, Penn State-Behrend stood firmly between the Medaille men's soccer team and the NCAA Division III Tournament. The powerhouse program conquered the Allegheny Mountain Collegiate Conference three of the last four years and, after blanking the Mavericks in their last three meetings, seemed destined to roll to the NCAAs again.

It took a Herculean team-wide effort in hostile territory, stellar goalkeeping from Callum Christie and a savvy approach by head coach Micky Blythe to vault the Mavericks back to the NCAA Tournament through a 1-1 (5-4 on penalty kicks) win on Saturday in Erie.

"We've talked about self-belief, we've talked about getting over the final hurdle," said Blythe, who will advance to his first NCAA Tournament as a coach. "All of these boys, wherever they've come from, a lot of freshmen and heavy sophomore, they all came to Medaille, to Buffalo, New York, to play in this NCAA Tournament, not to make up the numbers.

Christie, who wasn't even on the roster to begin the season and didn't start a game until Sept. 23, was the unexpected hero, ending regulation with a stunning save, then keeping Medaille in the hunt during penalty kicks before dominating the seventh round of shooters himself.

The junior from Ontario, Canada, stepped up to take a spot kick, placing his try low to the left, just beyond the reach of Behrend goalkeeper Chris Ralph, who'd guessed correctly. The Christie leaped right to push away Lions center back Andrew Mastovich's strike, igniting a raucous celebration between the jubilant Mavericks and their traveling supporters.

"It's probably the most euphoric feeling any goalkeeper could imagine," said Christie of his emotions following the game-winning stop. "I've always been really good at reacting before the ball is shot, so I just thought I might as well go with my instinct. I dove right for every single penalty except for one, and I had a good instinct that I was going to get at least a couple saves." 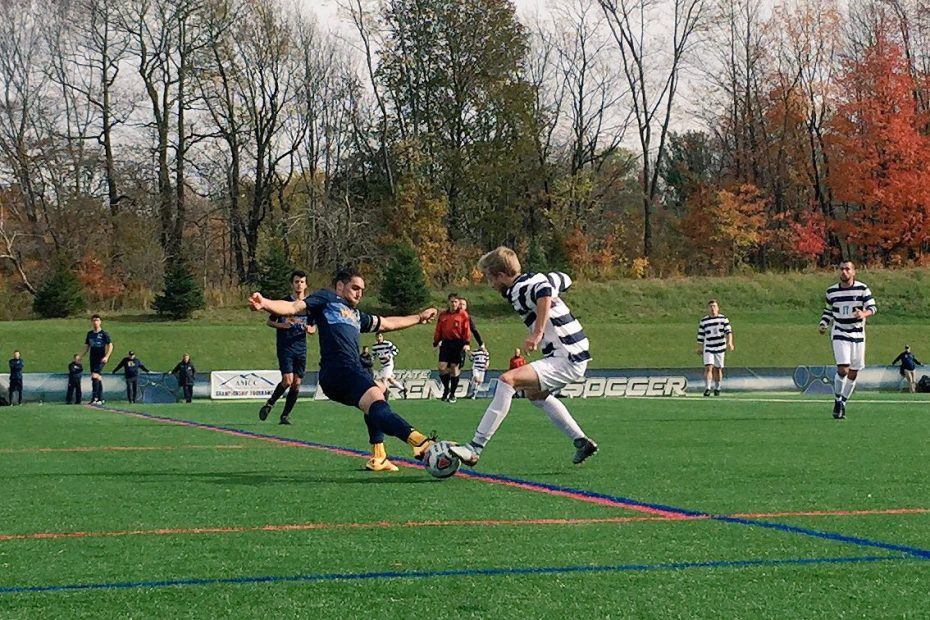 Medaille's narrow victory capped a difficult playoff run; the Mavs needed overtime to knock off D'Youville in the quarterfinals, then avenged a regular-season loss to Mount Aloysius on the road in the semis behind a late Lachlan Wilkinson goal.

"We were a lower seed this year," explained captain Anthony Marafioti. "We had to go away, away - and then to come up with this win, it means all the more."

*1-0, Medaille, 36': Building up the right wing, Medaille center back Sam Beesley hollered at Marafioti to dribble into the 15 yards of space in front of him. A nice hesitation move and tidy touches by the captain took him to the edge of the Lions' 18-yard box, where he knifed inside before dishing a soft pass against the grain to Holy Given Gbode, who solved Ralph from close range.

"I saw space, and I remembered the first run I did, they didn't really foul me - it was a bit rough - so I saw the space, I backed myself to go down the line, did a little step over, saw a little space in the middle, saw Holy and he tapped it in," Marafioti remembered. "I just kept going, kept going - I was fortunate to have the space and I made the most of it, I guess, and Holy's finish was second to none." 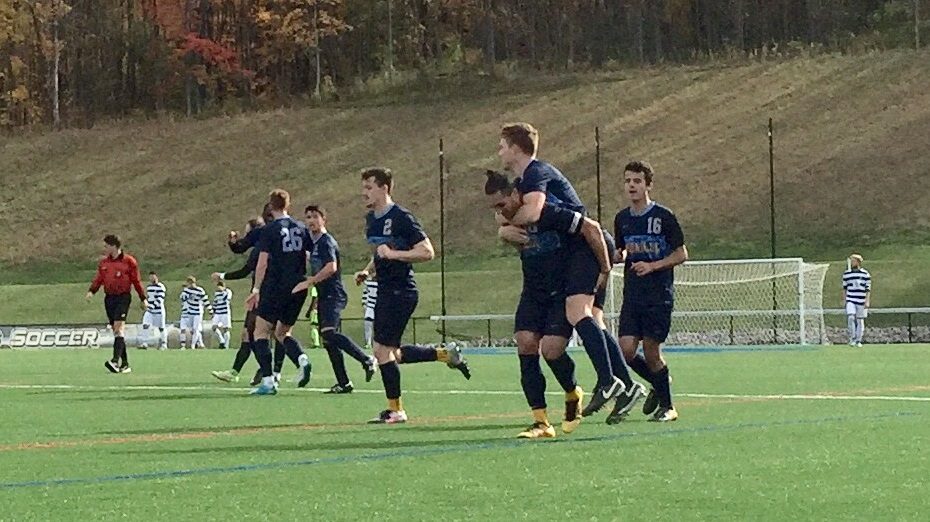 Medaille's Mitchell Ali jumps on the back of Anthony Marafioti, who created the game's first goal. (Ben Tsujimoto/Buffalo News)

*1-1, tie, 47': Behrend stormed out of the intermission like an entirely different team, and head coach Dan Perritano's side earned a controversial penalty less than two minutes in. Medaille center back Kyle Ferguson stepped into a tackle on Behrend's leading scorer, Matt Dziadosz, who tumbled to the ground clutching his ankles.

After a few seconds of deliberation, head referee Nikola Zdjelar pointed to the penalty spot - infuriating the emotional Ferguson - and Dziadosz hit a laser by Christie to knot the score.

*TURNING POINT: Medaille spent the second half staving off a hungry Lions attack; there were several moments where it looked like the Mavs would finally break, but none more than at the death.

With less than 10 seconds on the clock, Behrend's Aaron Harris drove hard to his right and smashed a shot toward goal as he reached the edge of the 18-yard box. Christie flung himself at the ball, deflecting the blast off the crossbar.

"I got a fingertip on it, it hit the bar, came out," recalled Christie. "Mitch [Ali] covered the line and as they shot it again, he got it with his shoulder and hit it off the line.

"That's what sent us to overtime, and that was probably the turning point for us. We knew we weren't going to be able to go forward to much, but once we realized we got to that, we knew that if we could get to penalties, it was ours."

"Heart's in your mouth," described Blythe of that moment. "At that point you start believing it's Medaille's day." 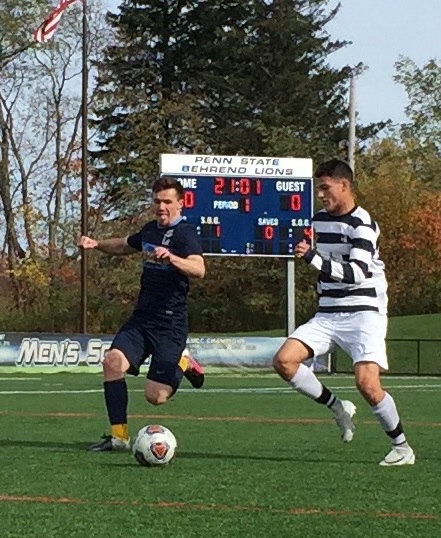 *REVERSE MEDAILLE: Tactics are one of soccer's beauties, but sometimes it takes a swallowing of pride to play differently than you're accustomed.

The Mavericks flipped leading scorer Mitchell Ali from his center midfield role to a third center back, splitting Sam Beesley and Kyle Ferguson in a conservative, condensed 5-4-1. It worked.

"Especially with a young team, we put so much faith into Micky," said Marafioti. "We were all skeptical about playing five at the back at first, but then he explained it to us. We came out first 20 minutes - it was amazing by us - we kept it really tight, didn't let them get through.

"Unfortunate to give away the penalty, but his system worked and we put all our faith in him. That's really what took us over the line today."

Although Blythe was quick to admit that such a defense-first scheme was not his personal preference either, something had to give after Behrend's recent dominance over the Mavs.

"We know Behrend are patient, they keep the ball, so we need to be patient ourselves and find a way to win the game. In the end, penalty kicks is fine by me - as long as we get to the NCAA, I don't care how we get there."

*WHAT'S AHEAD: Medaille will learn its first-round opponent and site on Monday in the early afternoon, with the match expected to be either Nov. 9 or 10. Since no member of the Mavericks' squad has played in an NCAA Tournament, the experience will be brand new - and that might make them a dangerous foe to face.

"I cannot wait," Marafioti said of the opportunity. "It's good to have a little break to get our bodies right, and we'll give it our best. We've got nothing to lose." 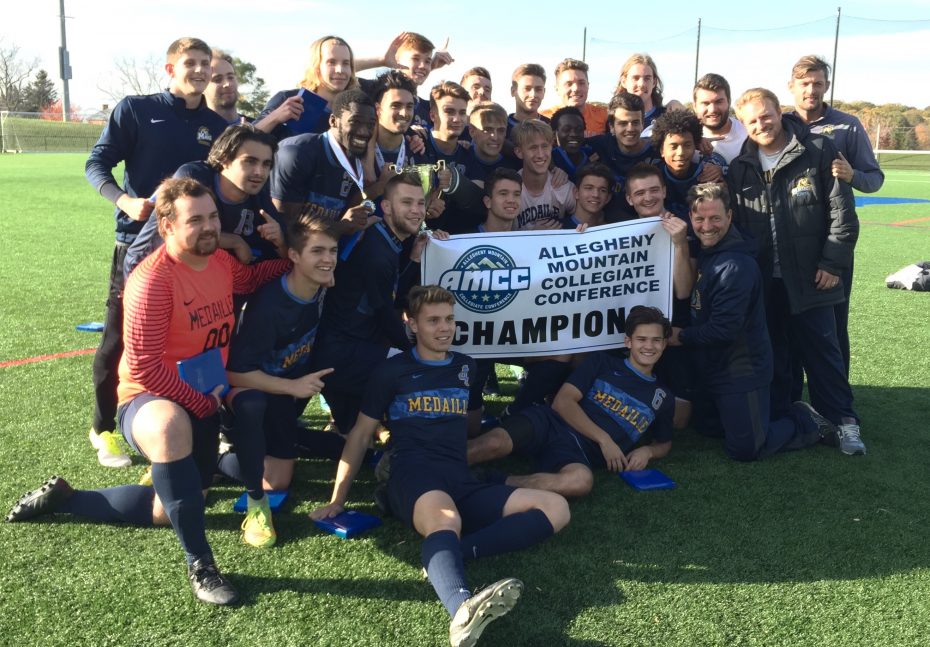