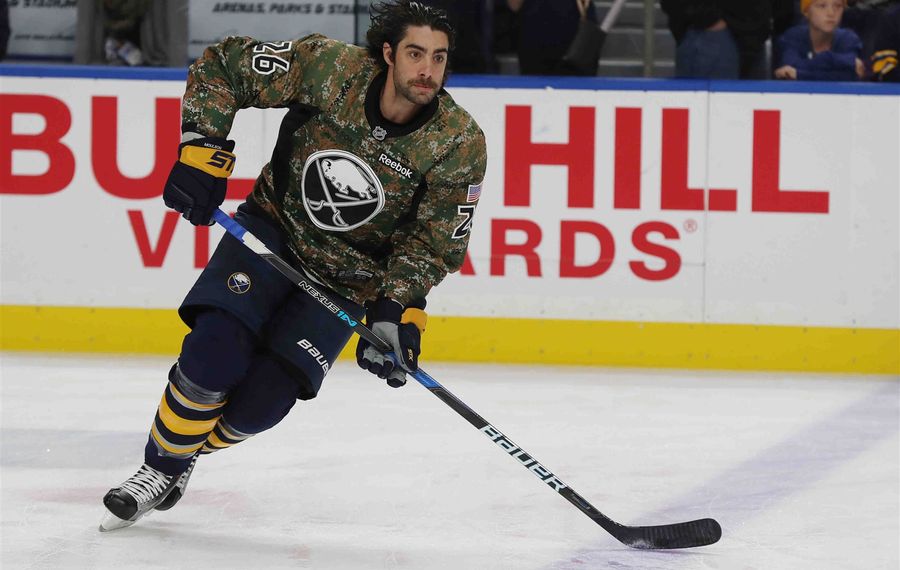 DALLAS – As the NFL protests about racial inequality devolved into debates about patriotism, a gap formed between some fans, athletes and teams. Perhaps sensing that, the Sabres are stepping up their military appreciation efforts.

The Sabres' Military Appreciation Game next Friday in KeyBank Center will feature everything from free suites to meet and greets to Air Force vehicles to dog tags.

The Sabres are offering $25 tickets in the 300 Level to all active, reserve, National Guard and retired military personnel. The tickets can be ordered at Sabres.com/military.

The first 15,000 fans for the game against Florida will receive a Sabres-themed military dog tag. Those arriving early will see the Sabres take pregame warm-ups in camouflage jerseys that will be auctioned off in a benefit for the Sabres' foundation.

Buffalo alternate captains Ryan O’Reilly and Zach Bogosian are donating a suite to members of the Coast Guard, and those members will be invited to the dressing room for a meet and greet with players following the game. The Sabres are also donating more than 200 tickets and an additional five suites to military organizations. Sabres players will meet with children of military families after their morning skate.

Military members will also receive a 25 percent discount at the Sabres Store the day of the game.

Before the game, the Niagara Falls Air Reserve Station will display military vehicles in Alumni Plaza. The Blue Aces Air Force band will perform in the 100 Level pavilion, and lead singer Christina Bagley will perform the anthems.

The Sabres are making their military efforts more than a one-day event. The players will visit the Coast Guard Station on Furhmann Boulevard after practice on Wednesday.

The Sabres' foundation is sponsoring a Sabres Military Appreciation trip to Washington on Monday. With help from Veterans One-Stop Center, the Sabres will take four veterans from World War II and the Korean and Vietnam Wars to tour the D.C. monuments and Arlington National Cemetery. Alumni Danny Gare and Rene Robert will accompany the veterans.

The foundation will also be donating $7,500 to the Buffalo Blues Benefit for Veterans. It will be held Nov. 25 at the Cove on Transit Road in Depew. Sabres alumni will be in attendance for the benefit, which has a $10 cover with all proceeds going to the WNY Veterans Housing Coalition. More information can be found at BuffaloBlues.org.