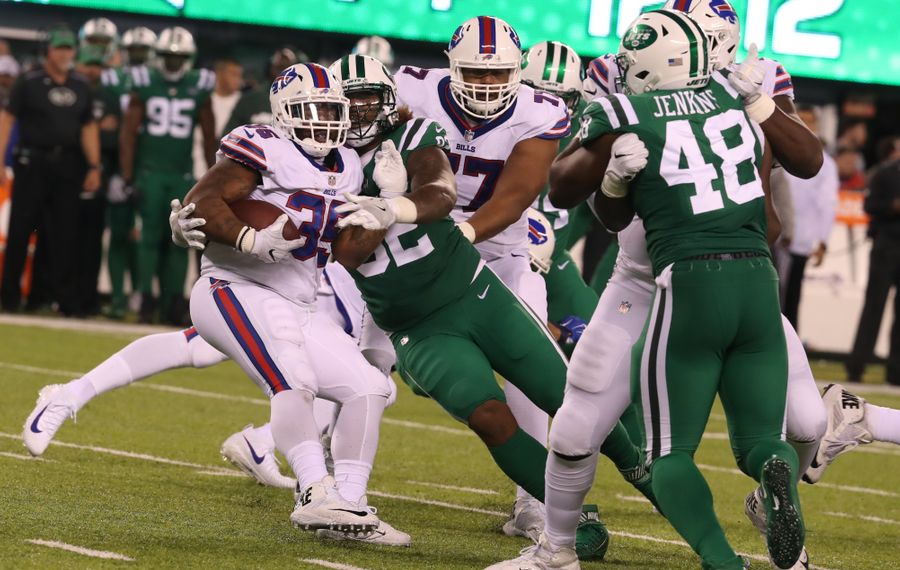 New York frequently played a condensed defensive front, with a nose tackle over the Bills' center and the two defensive ends over the outside shoulder of the guards. Normally the Jets defensive ends are a little wider, head-up over the offensive tackle (a 5-technique position). The Jets' 3-4 ends are studs. Leonard Williams was the sixth pick in the 2015 draft. Muhammad Wilkerson was a first-round pick in 2011.

Bills guards Richie Incognito and Vlad Ducasse, in particular, had a rough night. Incognito whiffed on nose tackle Steve McLendon to create the second sack. Williams beat Incognito on an initial move on the third sack, which allowed Wilkerson to take down Taylor. McLendon shoved back Ducasse into Taylor on the fourth sack.

The Jets were able to get wide on the Bills better than any team this season. New York gashed the Bills for seven plays of more than 10 yards. The big one was a 51-yarder in the third quarter by Bilal Powell to the Buffalo 10. That was followed by a 10-yard run off right end that gave New York a 24-7 lead.

Tight end Eric Tomlinson lined up at fullback much of the game and served as a lead blocker for Powell and Forte. It didn't help that the Bills committed six defensive penalties, which helped the Jets keep drives alive and get even more chances to keep running the ball. The Jets ran 41 times and attempted only 20 passes.

The Jets were missing starting right tackle Brandon Shell due to a neck injury. He was replaced by Brent Qvale. Shell has given up four sacks and Qvale three.

Ten Plays That Shaped the Game: First play from scrimmage was a bad omen

McCoy had a good day hitting outside zone runs against the Jets in the season opener. He rushed 22 times for 110 yards. The Bills pounded out 190 total rushing yards, the most allowed by the Jets in their last 35 games. It was a different story this time. The Bills had no luck getting outside because the Jets had too much quick penetration from their defensive line.

McCoy was limited to 25 yards on 12 carries. Take away a 13-yard run that came on his second touch of the game and he had 12 yards on 11 attempts. The Jets' struggled in their first two games stopping the run – against the Bills and the Raiders. But their run defense had not been bad the five games since.

There was no room to run inside zone plays against the Jets' stout three-man line of Muhammad Wilkerson, Steve McLendon and Leonard Williams.