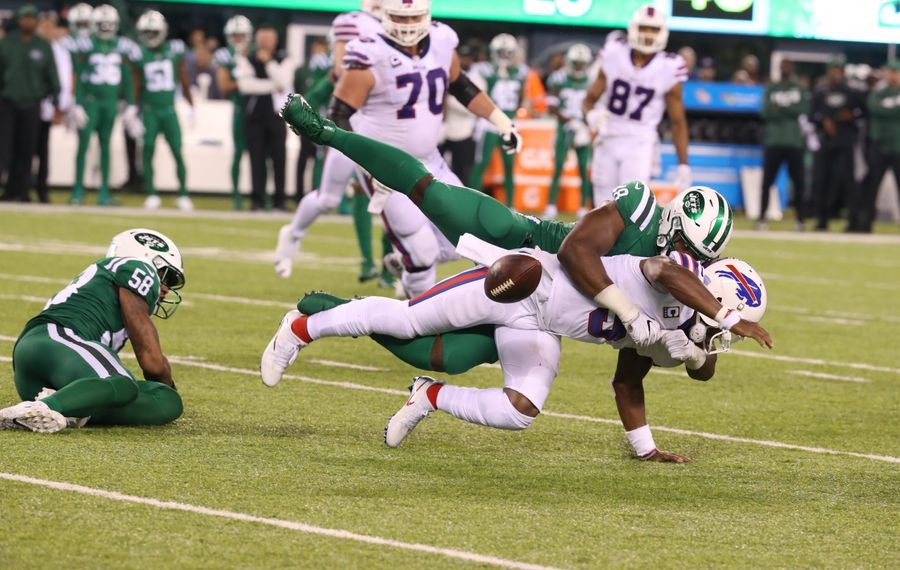 EAST RUTHERFORD, N.J. — The Buffalo Bills weren't the same team they had been through their 5-2 start Thursday night.

The Bills who showed up at MetLife Stadium to face the New York Jets, who had been on a three-game losing streak, gave the ball away three times. The Bills who won five games led the NFL in turnover ratio at plus-14.

Thursday night's Bills also had no semblance of a run game, allowed seven sacks and were penalized 11 times. That was not the efficient bunch that had people talking seriously about the end of a 17-year playoff drought.

In short, the Bills did what they typically do when they're on a roll. They stumbled and fell, ending up with a 34-21 loss. And the only reason it was that close was because of a garbage touchdown the Jets gave up with 2:29 left.

"We haven't had a bad game like this," offensive guard Richie Incognito said.

The Bills squandered a chance to show the nation they were for real. The Jets, whom the Bills had physically handled in their Sept. 10 season-opener, outplayed them in almost every phase.

"This was uncharacteristic of this team to date, the way we played so far," coach Sean McDermott said. "We've got to learn from it. We got outcoached, we got outplayed.

The Bills' problems seemed to begin from the very start, when they allowed Josh McCown and the Jets' offense to move down the field with ease to put Buffalo into a 7-0 hole with 7:43 left in the first quarter. McCown himself ran with ease through the Bills' defense for a 10-yard touchdown to cap the eight-play, 54-yard drive.

And that was only the beginning of the issues the NFL's third-ranked run defense before the game had.

The Jets tore through the Bills for 194 yards on the ground, averaging 4.7 yards per carry. Veteran Matt Forte ran for two scores.

At times, the Bills' defense seemed to not want to tackle.

Meanwhile, the Bills' offensive line was consistently overwhelmed. LeSean McCoy was held to only 25 yards on 12 carries as the Jets loaded the box with eight defenders and dared the Bills — who chose not to play newly acquired wide receiver Kelvin Benjamin — to throw on them.

The plan worked to perfection.

The Jets either were pushing the linemen into the backfield or simply blowing around them to swarm Tyrod Taylor, who rarely had enough time to make reads.

"It starts up front every week, it does," McDermott said. "And we need to do a better job of establishing the line of scrimmage earlier in the game and give credit to the Jets."

Taylor had a nice, 10-yard throw over the middle to Zay Jones for the Bills' first touchdown early in the second quarter. But his 285 passing yards were deceiving, because much of the production game when the outcome was well in hand.

Once again, the Bills' pass rush was nonexistent. They only sacked McCown once and were credited with a mere four quarterback hits.

"You look at the penalties, some of those you could call them aggressive, a few of them," McDermott said. "But other than that, you can't do that and expect to win a game in the NFL. We've got to get better, we'll learn from this and no excuses.

"We give credit to the opponent, to the Jets, they beat us straight up tonight."

The Bills showed a lack of discipline. Defensive end Jerry Hughes drew a personal foul for arguing with the officials late in the game.

This was not the kind of team McDermott and General Manager Brandon Beane set out to build. In many ways, the Bills looked like the undisciplined squad that Rex Ryan and former GM Doug Whaley fielded the past two years.

McDermott has been stressing since training camp the importance of players keeping their composure. Thursday night, it looked as if the Bills were overreacting to every bad thing that happened to them and compounding their failings with either poor, lackluster effort or a general lack of focus.

"These guys want to win, it means a lot to them, and you see the emotion, but you can't do that," McDermott said. "We have to stay poised regardless of the situation in the game and be disciplined and we need to do a better job with that."

Tim Graham: The Pessimism envelops The Process in Bills' loss to the Jets

The general theme within the Bills' dressing room was that it was a learning experience. It had better be.

Yes, the Bills' schedule affords them opportunities to bounce back, with their next game at home, against the New Orleans Saints, and the woeful Indianapolis Colts among their remaining opponents.

But it isn't enough that the league is generally wide open. The Bills discovered Thursday night that they can't suddenly become a different team than the one that had put them in the position to be considered a contender.

The Bills have to be a team that forces the other guys to make mistakes. They have to keep their own to a minimum.

"Just like any game, whether it's the national spotlight or not, it's never easy to win in this league," McDermott said. "You've got to be on your game every week and we obviously weren't tonight. And I take responsibility for that.

"You have to start by being honest. I know I can do some things better. In order for us to move forward and grow from it, we have to be honest with ourselves and I can assure you we'll do that."

The coach didn't want to hear any excuses about having little time to prepare for the game. He was right not to touch the topic, because it was the same for the Jets.

McDermott also didn't believe his team was overconfident from hearing all of the praise that had been coming its way after back-to-back victories against the Tampa Bay Buccaneers and Oakland Raiders.

But there wasn't a whole lot of despair in the dressing room. Frustration, yes, but not much more than that.

"I know this team will respond really well," Incognito said. "We're resilient, we're tough. We have the traits necessary to get over this. It's a taste of humble pie that came at a good time."