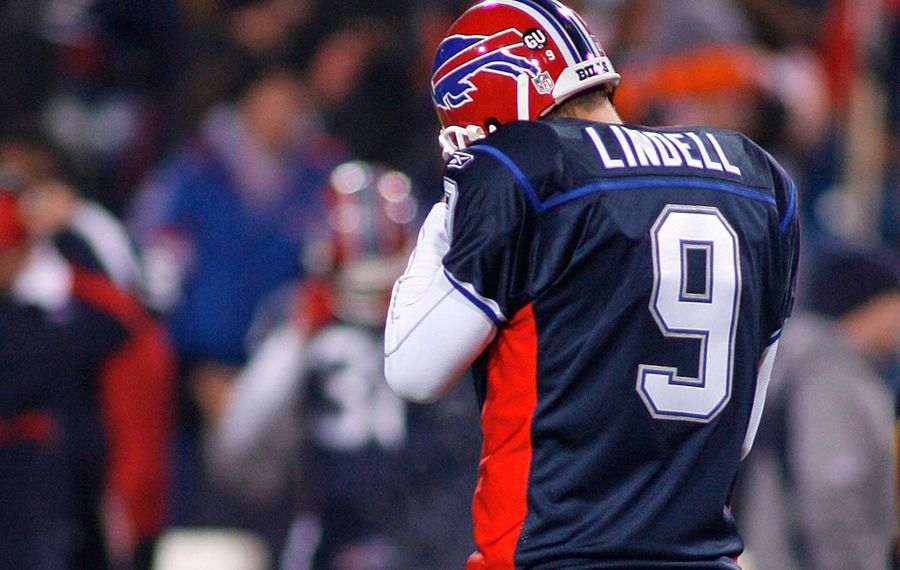 The Bills schedule was released at 8 p.m. on a Thursday night in April. At 8:45, the Bills’ Twitter account had a question.

“Hey @nfl, where those home primetime games at?” they asked, adding a thinking emoji and a GIF of Lorenzo Alexander with outstretched arms.

Hey @nfl, where those home primetime games at? 🤔 pic.twitter.com/W2bmMYkY4y

Prime time, however, has not been kind to the Bills over the course of the playoff drought. The Bills have played 22 prime-time games since 2000, winning just five while losing eight times by a touchdown or less.

Their prime-time winning percentage of .227 is significantly worse than even their overall percentage over the drought, which is .419, including this year’s 5-2 mark. Splitting prime-time games by home and road doesn’t make much of a difference – they’re 2-6 at home and 3-11 on the road.

Can this year’s Bills continue to show they’re different? They’ll have a chance to shine Thursday in their lone prime-time game of the season. A win would give them six in their first eight games, which they haven’t achieved since 1993.

“It’s a great opportunity,” quarterback Tyrod Taylor said. “Night games give you just a different feeling. Of course, when you know everyone’s watching you, you look forward to those moments.

“Even with the short week, guys are preparing hard and looking forward to this opportunity to show the other team what we can do but as well as show the people that are going to be watching – and everyone’s going to be tuned into Thursday Night Football – to show that this team is real.”

Here’s a look back at every prime-time game since the drought began in 2000:

The Bills opened in prime time against the Titans the year after the Forward Lateral. Steve Christie hit a 33-yard field goal with 31 seconds left to break a 13-13 tie, and there would be no Home Run Throwback this time.

Both teams entered the game 7-6 in the old Eastern Division. Two fourth-quarter touchdowns 15 seconds apart put the game out of reach after Rob Johnson threw a pick-six. The Colts won out and made the playoffs at 10-6. 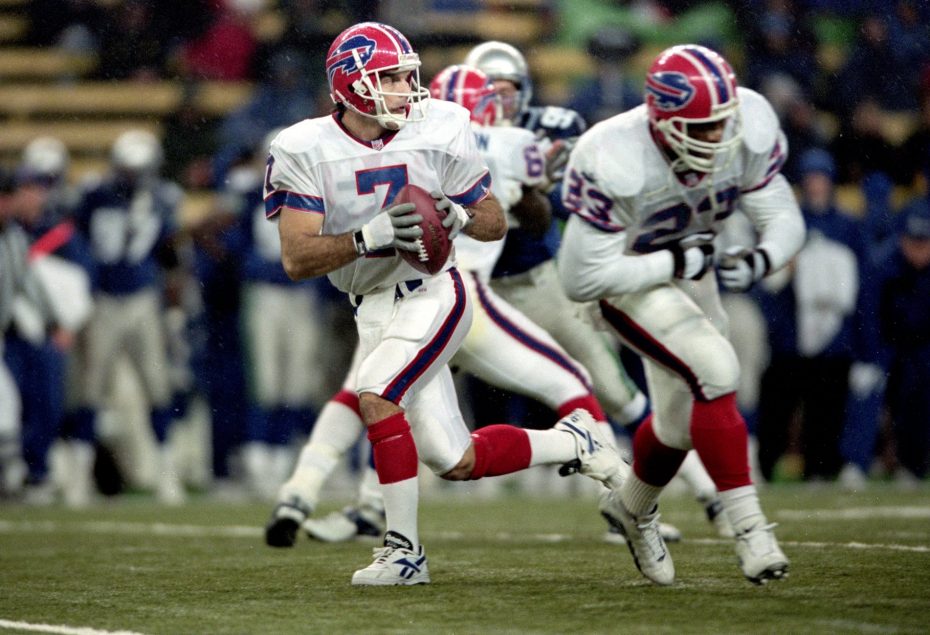 Quarterback Doug Flutie of the Buffalo Bills moves back to pass the ball during the game against the Seattle Seahawks at the Husky Stadium in Seattle on Dec. 23, 2000. The Bills defeated the Seahawks 42-23. (Otto Greule Jr./Getty Images)

Doug Flutie started the final game of the season and posted a perfect passer rating of 158.3, completing 20 of 25 passes for 366 yards and three touchdowns in trouncing the Seahawks to finish 8-8.

Jake Arians hit a 46-yard field goal with a minute to go and the Bills held on to give new coach Gregg Williams his first win after an 0-4 start to the season.

Alex Van Pelt threw four interceptions in an ugly loss for Williams and the Bills, which dropped them to 1-10 and marked the first time they had been shut out since 1993.

The Bills gained only 118 yards of total offense, which was their lowest output since 1979. Nate Clements returned a Jay Fiedler interception 54 yards for a touchdown in the fourth quarter for the Bills’ only score.

The Bills committed seven turnovers, including four by Drew Bledsoe, as Dick Vermeil’s Chiefs went to 8-0. But the Bills at least achieved the rare feat of finishing with five points, which only happened two other times in team history.

Woof. The Bills were outgained 428-125 after the Red Sox paraded their championship trophy around the stadium during the pregame. Drew Bledsoe threw three picks and posted a passer rating of 14.3 against his former team.

The Bills went up by nine points in the fourth quarter before the Patriots got two Corey Dillon touchdowns just 1:33 apart thanks to a Kelly Holcomb fumble forced by Rosevelt Colvin.

Eric Moulds had nine catches for 110 yards in the final home game of his decade-long stint with the Bills as Jake Plummer’s Broncos clinched a playoff berth by improving to 11-3. 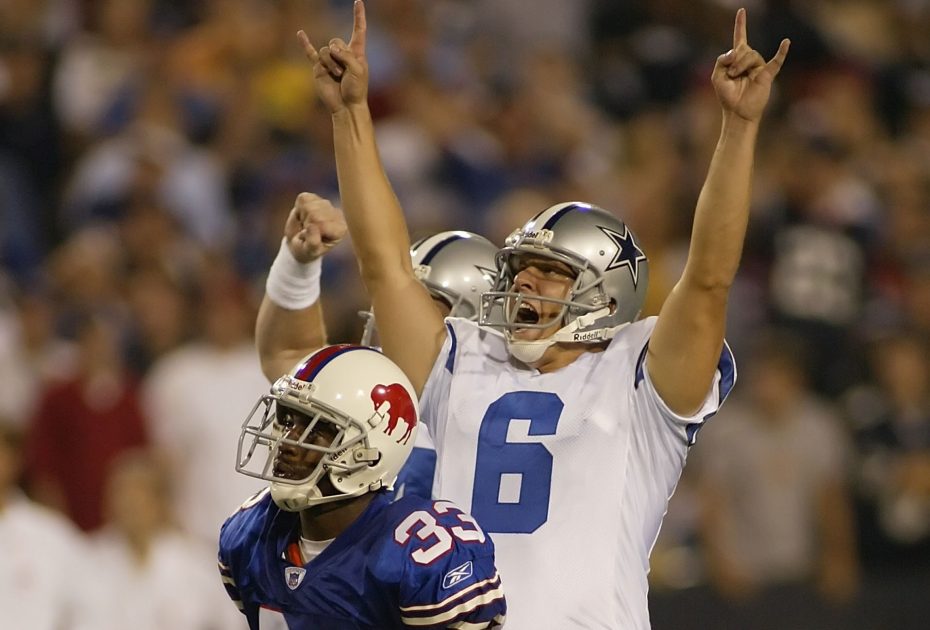 Ugh, this one hurt. Defensive and special teams touchdowns had the Bills ahead nearly the entire way in their first MNF appearance in seven years, but the feeling of the game slipping away was palpable. Tony Romo threw a touchdown to close the gap with 24 seconds left, the Cowboys recovered the onside kick and Nick Folk hit a 53-yarder to win as time expired.

Tom Brady and Randy Moss connected for four touchdowns in the first half as the Patriots blitzed the Bills to improve to 10-0 in their post-SpyGate season that ended with a Super Bowl loss to the Giants.

Trent Edwards scored to give the Bills a one-point lead with 2:25 to go in a back-and-forth game, then Phil Dawson answered with a 56-yard field goal. A pass to Robert Royal got the Bills in position for a winning kick, but Rian Lindell missed from 47 yards to give Browns QB Brady Quinn the first of his four career victories.

Ah, the infamous Leodis McKelvin fumble game. Trent Edwards looked to be leading the Bills to a rare win over the Patriots when he hit Fred Jackson to go up 24-13 with 5:32 to go. Tom Brady answered with a touchdown drive, and the Patriots kicked off deep. McKelvin took the ball out of the end zone instead of kneeling it and then fumbled, setting Brady up for the winning score. Bills fans vandalized McKelvin’s front lawn after the game.

The Bills didn’t put on much of a performance in the second game of the Toronto series, falling to 1-2 under interim coach Perry Fewell. Ryan Fitzpatrick threw for 98 yards and lost a fumble while each team punted seven times.

The Bills didn’t score an offensive touchdown, but four field goals and solid defense helped Leodis McKelvin’s punt return for a touchdown 90 seconds into the game stand up for the win.

The Bills went up 24-17 late in the third quarter but were outscored 20-0 the rest of the way. Jeff Tuel tossed a pick-six with under 2 minutes to go after EJ Manuel left the game with a head injury.

Both teams entered the game at 5-4. Doug Marrone called it a must-win and then punted from the Dolphins’ side of the field on fourth and 6 with 9:55 to go. 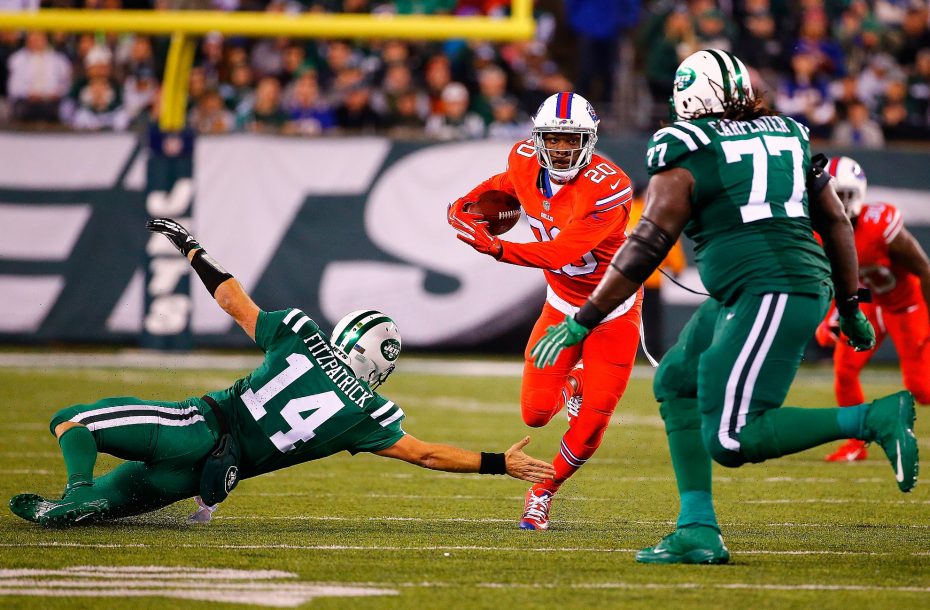 Corey Graham of the Buffalo Bills intercepts a pass by Ryan Fitzpatrick of the New York Jets during the second quarter at MetLife Stadium on Nov. 12, 2015, in East Rutherford, N.J. The Bills won the contest, 22-17. (Al Bello/Getty Images)

The Bills went up 22-3 and held on to win in Rex Ryan’s return to the Meadowlands. After the game, he equated beating the Jets to telling an ex-girlfriend that she can’t have you back.

Tyrod Taylor and the Bills kept it close, but New England stayed perfect at 10-0 in another Patriots loss that blends in with the others. Proving this one belonged in the drought, it even featured a Leodis McKelvin fumble.

Ryan Fitzpatrick had a career day, throwing for 374 yards while embarrassing the Bills at New Era Field and handing his former team their second loss in five days. Offensive coordinator Greg Roman was fired the next day.

The Bills drove deep into Seahawks territory in the final minute but couldn’t connect on a winning touchdown. An error by the officials cost the Bills three points at the end of the first half.