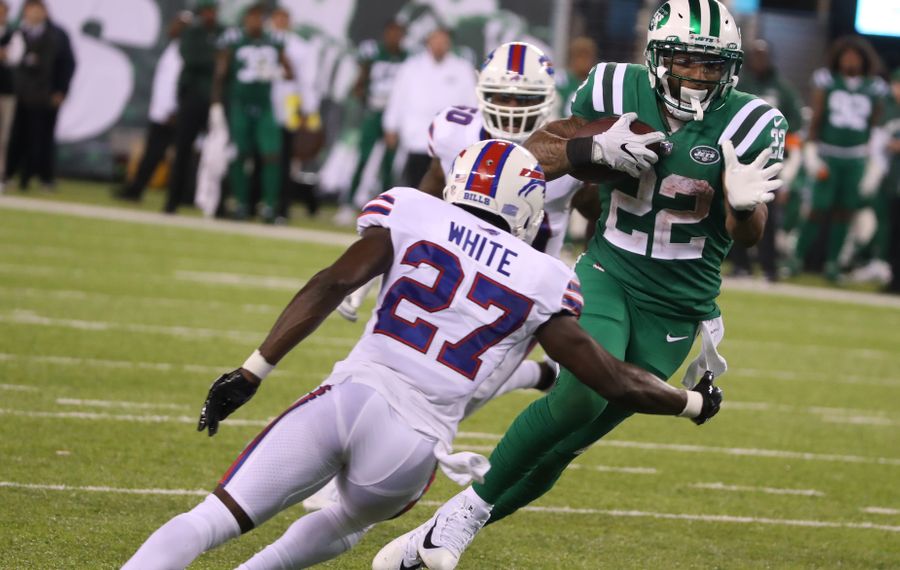 1. That’s a version of the Buffalo Bills we haven’t seen this year – and fans surely don’t want to see again. The Bills were undisciplined, unprepared and flat-out manhandled in every conceivable fashion by a Jets team that is less talented. The result was a massively disappointing 34-21 loss Thursday night at MetLife Stadium. Don't be fooled, the game wasn't that close, either.

Buffalo had three personal fouls in equaling a season high with 11 penalties, lost the turnover battle for the first time this year and otherwise turned in an absolute dud of a performance in what was their worst effort of the season by a mile.

This loss is similar to the one the Bills suffered in Week Five at Cincinnati. The Bills came in riding high at 3-1 for that game, and couldn't run their winning streak to three games. Similarly, Bills fans were feeling all warm and fuzzy after their team came out of the bye with two wins to get to 5-2, but they again couldn't get that third straight win. If the Bills fail to make the playoffs this season, start here when analyzing why.

2. Right guard is an issue for the Bills. After giving John Miller the first four starts of the year, it’s been Vlad Ducasse who has gotten the last four. That the team is having such a difficult time filling the spot makes it even more baffling that Ryan Groy hasn’t gotten a shot there. The Bills’ offensive line as a whole was a mess, though, so it’s not like one position can take all the blame. Franchise left tackle Cordy Glenn looked like a turnstile at times. Whether it was in the run game or pass protection, the offensive line absorbed a butt kicking.

3. If Sean McDermott wants to show he's serious about holding his players accountable, he'll issue some sort of punishment to Jerry Hughes. The hot-headed defensive end took another unsportsmanlike conduct penalty near the end of the third quarter. It's an issue that predates McDermott, and it's gone on far too long. Hughes' act is old, and it can't be tolerated by the new coaching staff.

4. It’s very easy to second guess Mike Tolbert getting back-to-back carries that produce only 1 yard, especially when they come after LeSean McCoy has gained 13 yards on a play few running backs can make. To be fair, Tolbert didn’t have a ton of room to run, but he’s also not exactly making anyone miss, either. Tolbert then stayed in for third down to block, and started the next series in the backfield. Four plays in a row is a bit much. Scratch that – it's way too much.

5. Dare I say it – it looked like some quit on the Bills' defense in the fourth quarter. After quarterback Tyrod Taylor lost a fumble, New York took over at the Buffalo 5-yard line. Matt Forte blew through with VERY little resistance for a touchdown that made it 31-7 after the extra point. Not having it on one night is one thing. Waving the white flag is quite another.

6. Since I don't want to be accused of being too negative, let me find one positive stat for you.

Ok, here we go. Colton Schmidt averaged 44.2 net yards. He had another solid night in what has been a good season.

7. Shaq Lawson’s struggles are starting to become more of an issue. The Bills’ 2016 first-round draft pick took a bad roughing-the-passer penalty in the second quarter, giving the Jets 15 yards on what became a drive that produced the go-ahead field goal. It was tough on the Bills’ pass rush to get to Josh McCown because of how quick he was getting the ball out, but Lawson has to be smarter in that situation. He also lined up in the neutral zone in the second half – always a fairly dumb penalty.

8. It’s a good thing Zay Jones was able to make it back into the game after suffering what looked like a right knee injury in the first half. The Bills have every right to be upset about the play, on which Jets cornerback Buster Skrine clearly stuck his leg out and tripped Jones. The rookie was off to a great start, catching his first career touchdown pass and setting a personal high with five catches. That's one of the few positives to take away from what was an awful night.

9. I’m not a fan of taking Brandon Tate out of the lineup, which the Bills have now done three times. Tate is a top-five punt returner in the NFL (his average of 11.3 yards per return ranked fourth coming into the game) who showed in Week Eight against Oakland that he can make plays when called upon offensively. Tate was replaced as the punt returner by Micah Hyde, which I also don’t like. He’s much too important on defense to be playing in that role.

1o. Kelvin Benjamin being inactive for the Bills is a definite disappointment for fans, but it’s understandable from the team’s perspective. Benjamin didn’t get so much as a single practice in with his new team after being acquired in a trade Tuesday. That’s not enough time for him to be anything more than a specialist. By giving Benjamin the night off, he’ll get valuable rest time to get right physically for the season’s second half, while also having 10 days to get a better feel for the offense.