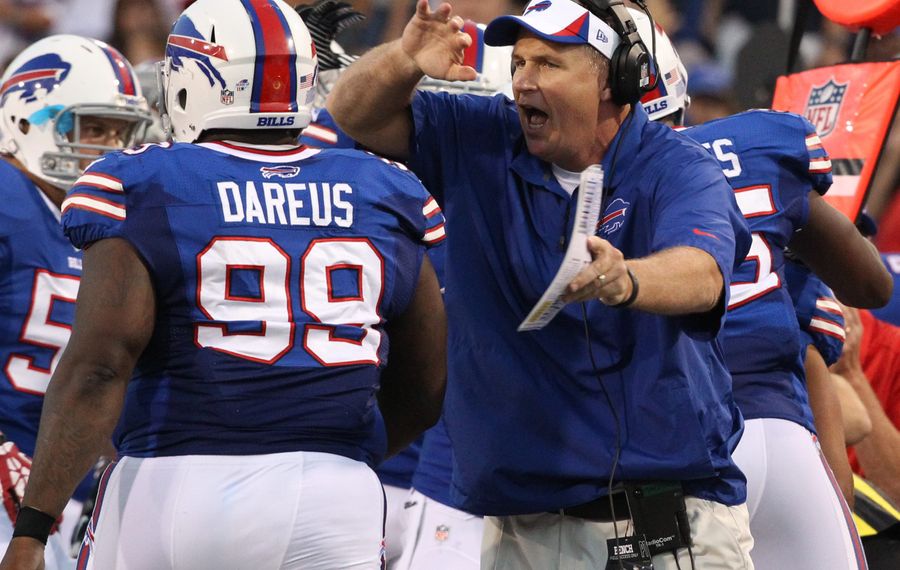 JACKSONVILLE, Fla. — Doug Marrone turned on a theatrical smile, crouched for added effect and would have been flashing full-fledged jazz hands had he merely wiggled his wrists.

The Jacksonville Jaguars coach had been asked what a change of scenery could mean for his newest player, defensive tackle Marcell Dareus, whose football greatness and teddy-bear persona pockmarked by poor decisions that have cost him and his team.

The Buffalo Bills sent Dareus to the Jaguars on Friday night for a conditional sixth-round draft choice. The trade reunited him with Marrone, the Bills' coach in 2013 and 2014, Dareus' best seasons.

"When I got the call [Friday night] and things happened the way they did, I can't lie," Dareus said, "it did make me a little emotional because I know tomorrow it is a one-way ticket.

"There's one thing that has been consistent in my life: I knew I'd be in Buffalo with people that I'm familiar with. To know I'm getting a one-way ticket to my new family is a culture shock for me."

To a detached observer, the trade wasn't surprising, aside from Buffalo's ability to jettison Dareus' exorbitant salary.

Dareus' star had waned, and he's one more misstep away from a lengthy NFL suspension, although his paycheck remained Buffalo's highest. He signed a six-year, $96 million contract extension in September 2015.

Bills coach Sean McDermott and General Manager Brandon Beane had been outspoken that Dareus needed to adopt their philosophies and meet their expectations. Dareus, sent home early from a preseason game for showing up late to the stadium, wasn't making an impact.

"It was, obviously, a money thing," said former Bills GM Buddy Nix, who drafted Dareus third overall six years ago. "He kind of got off on the wrong foot with those guys, and I think maybe they were worried he didn't buy in quick enough."

Dareus was on the field for only 40.6 percent of his available snaps in McDermott's defensive-line rotation.

Dareus entered the season having played 71 percent of his available snaps over his career.

"When your highest-paid player is playing less than 50 percent of the downs," Bills pass-rush king Bruce Smith said, "the numbers don't add up. It's all out of whack."

The Bills, meanwhile, are 5-2, a half-game behind the New England Patriots for first place in the AFC East. They are 4-0 at home for the first time since 1995. Just one NFL team has surrendered fewer points.

Jerry Sullivan: Marcell Dareus steps out, and guys step up

Smith shared his thoughts about the Dareus trade while watching the fourth quarter of Sunday's 30-14 victory over the Oakland Raiders.

"Sean doesn't want to mess up the cohesiveness of this team," Smith said from his home in Virginia. "He's not going to let anyone interfere with that or compromise what he wants to accomplish.

"They're doing it with guys who are not necessarily superstars. Sean is making a decision that, 'We're getting the most out of these guys that are hungry and want to make a name for themselves and contributing to the team and making an impact,' where he wants everybody adhering to that mindset."

Disciplinary issues will be what many Bills fans remember about Dareus' time in Buffalo. They also will remember the front office's strange tolerance for his misbehavior.

Dareus' 2015 extension included $60 million in guarantees, but the Bills agreed to uncommon contract language that prevented them from voiding future guarantees if he were to get suspended.

He had trouble getting to One Bills Drive on time for meetings and practices, and the NFL already had suspended him a game for violating its substance-abuse policy.

The NFL would suspend him the first four games of 2016 for doing it again.

"You can't spend any amount of time around Marcell and not like him," Nix said. "He's a great kid and an exceptional talent. You'd pick him every time. He was a dominating player.

"We never had a problem once we got him in the building. It was when he went home.

"When they were talking about trading him, you don't want him to go to Chicago or New York or maybe even Dallas. The bigger the town and the more activity I think the worse it would be."

Dareus and Marrone's overlapping seasons were a rollicking time for Buffalo defenses, but a turbulent one for the franchise, given founder Ralph Wilson's death and the team being put up for sale.

Marrone used a provision in his contract to escape with a $4 million payout in the event of an ownership change. He worked as a Jaguars assistant coach for almost two years and is back in charge of an NFL team.

The Jaguars are 4-3, second to the Tennessee Titans in the AFC South because of a tiebreaker. The Jaguars' defense ranks sixth in yards allowed and fourth in points allowed.

While they lead the NFL in pass defense, the Jaguars are dead last against the run. That's where Dareus (aka "Mr. Big Stuff") can help a woebegone franchise itching for a postseason push.

"I saw a lot of people saying that we won the bye week, and we did," Jaguars linebacker Telvin Smith said. "That is definitely an upgrade for our defense. ... I'm definitely looking forward to adding another head to this monster."

Dareus leaves Buffalo with 35 sacks, eighth all-time in club history. He is second to Kyle Williams for Bills defensive tackles. He ranks fourth in the NFL among defensive tackles since 2011.

Kyle Williams on Marcell Dareus leaving Bills: 'It's going to be a good thing'

Dareus was a first-team All-Pro in 2014. He amassed 10 sacks through nine games. Analytics site Pro Football Focus charted him for three additional quarterback hits and 12 hurries in that stretch.

But over the 34 games Dareus has played since, he recorded 6.5 sacks with four more quarterback hits and 40 hurries. He hasn't had a full sack in consecutive games since October 2014.

Five months later, Dareus was arrested for possession of synthetic marijuana and drug paraphernalia — the basis for his one-game NFL suspension — in his native Alabama.

Two days after addressing that arrest by insisting the Bills "know I'm not a trouble guy," Dareus crashed his 2012 Jaguar into a tree outside the Mongolian Buffet in Hamburg while street racing with defensive end Jerry Hughes.

In August 2016, having been suspended four games for violating the drug program again, Dareus announced he would enter a rehabilitation facility and miss the rest of the Bills' preseason.

That night, Dareus was photographed at a club on Chippewa Street. Dareus never did check into a rehab center, instead receiving outpatient treatment locally while remaining with the Bills.

Marrone said Monday afternoon he didn't know anything about the nightclub episode; the coach wasn't with the Bills anymore. But Marrone suggested the Jaguars would handle any additional off-field issues if they arise.

"I think the one thing with Marcell is, because of the past, he knows what is expected from me," Marrone said, "and I think that's the most important thing. We've had open communication in the past, and I expect that to be the same way now."

Besides, we should remember the same work environment that helped create 17 straight seasons without the playoffs managed Dareus' accountability.

"You know how Coach Marrone and Coach Coughlin are," Jacksonville linebacker Paul Posluszny said. "He's a veteran, and he's going to be with great guys like [defensive linemen] Calais Campbell and Malik Jackson.

"He can fit right into this culture and have an impact."

The rundown of transgressions led many of us to dismiss Dareus' better side, to believe he didn't handle his responsibilities and took his role for granted, to write him off for myriad boneheaded decisions, to consider him predictably unreliable.

Those issues, while harmful to the Bills' cause, didn't make Dareus a bad person. He did charity work in parts of Buffalo most players don't venture into.

He was scheduled Friday to receive the inaugural Changemakers Humanitarian Award for his philanthropic work around Western New York. The award was sponsored by Crews Brand Marketing at its annual Changemakers 30 Under 30 event.

Dareus has been Santa Claus for Christmas parties he hosted for children at the William-Emslie Family YMCA in Buffalo. He donated an extra $10,000 last year.

He has worked with the Boys & Girls Club of Buffalo, donating cash, hosting Halloween parties and making a contribution to the Buffalo Bisons Foundation in June so 100 kids could attend his first Bisons game with him.

In February, he donated $25,000 to Hope for Haiti after visiting his father's homeland for the first time. In August, he gave $25,000 to the Salvation Army for Hurricane Harvey relief.

Dareus met with Jaguars reporters for the first time Monday afternoon. He was most contemplative when talking about Buffalo and the people he'd left behind.

He had just practiced with the Jaguars for the first time, yet still seemed wobbled by the trade.

"It's such a different experience," Dareus said. "I thought that Buffalo was home, and I'm just extremely happy for everything I've done there and everything they've done for me, the organization."

Once the final question was asked, Dareus turned from the lectern to walk away.

He exchanged a few pleasantries, took a couple steps toward the door and then lurched back for an item he'd forgotten, an item he's not used to carrying around, but which represented that change of scenery.