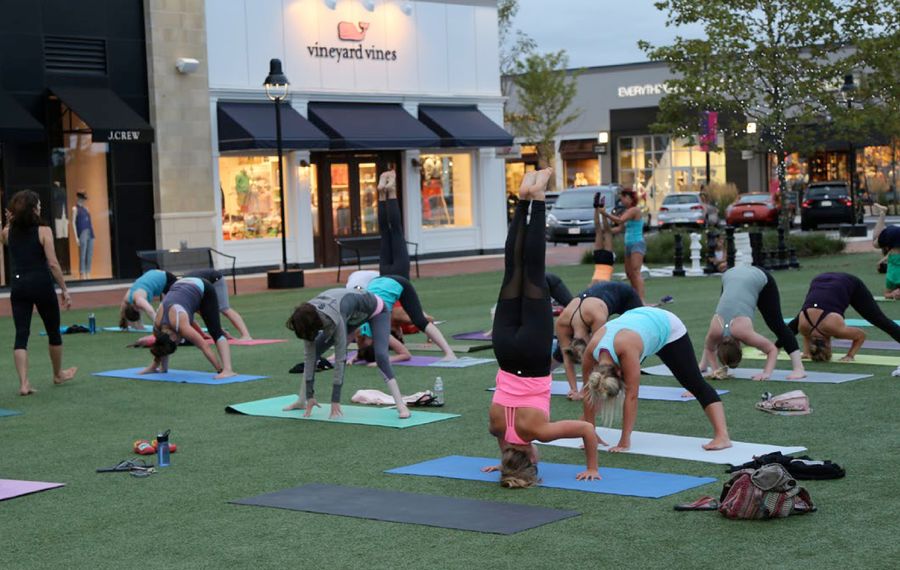 The developer remaking the Northtown Plaza shopping center wants to construct six buildings around a central parking area and create a common green where customers could do yoga, watch movies and ice skate.

The concept plan recently filed with the Town of Amherst is the first detailed look at WS Development's plans for the high-profile property on Sheridan Drive, which the company wants to transform into an upscale destination for shoppers in the region.

The documents don't include any names of tenants, but WS Development identifies prospective tenants in wish lists, known as merchandising plans, that have circulated over the past few years.

In one from December that The Buffalo News obtained, the same six buildings in the plaza are filled with well-known national retailers and restaurants such as Vineyard Vines, Sephora and Shake Shack. Local businesses including Spot Coffee, Lake Effect Ice Cream and Allen Burger Venture also are marked on the plan.

WS Development did not provide the document to The News, and the company cautioned that the December plan is out of date. A top official said the companies identified on the merchandising plan are not necessarily those that will sign leases.

"The plan changes all the time," said Brian Sciera, a Buffalo native and senior vice president of leasing for WS Development. 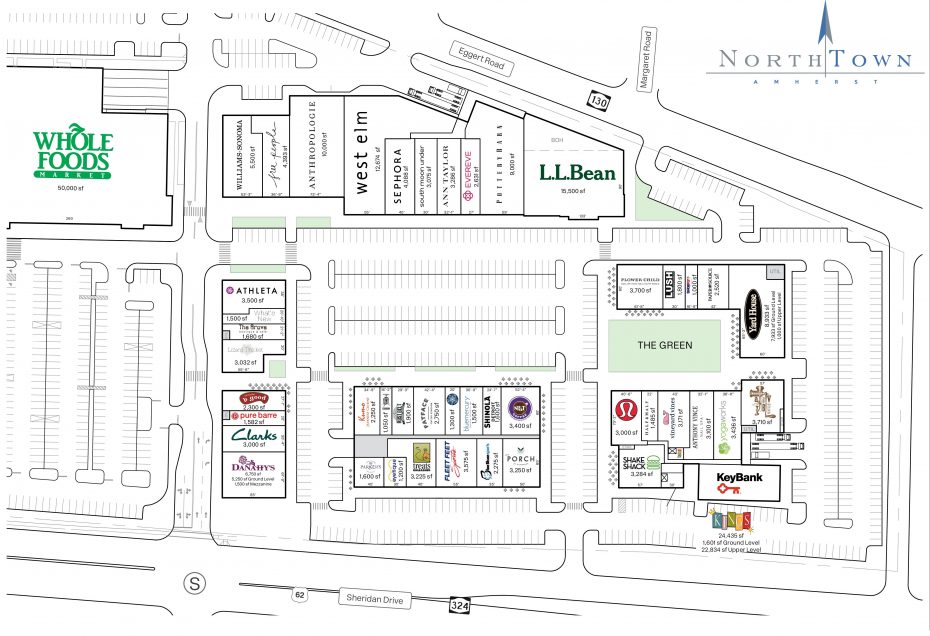 WS Development created this merchandising  plan for its Northtown Plaza remake, with the names of retail stores it hoped to attract, in December 2016. The company says that it has not signed leases with many of the stores on the list, and some of the businesses are no longer even in the developer's plans as it remakes the plaza in Amherst.

But the merchandising plan, paired with the concept plan, provides a window into how WS Development aims to bring its ambitious project to life.

The Whole Foods Market that opened last month at Northtown Plaza is the first step in that direction, of course. And WS Development already has announced that West Elm, Pottery Barn and Williams-Sonoma will come to the plaza. And The News previously reported that L.L. Bean had signed a lease, and that a pet store in the plaza was negotiating to stay.

The company also has signed, but had not previously disclosed, a lease with B.Good, according to its website. B.Good is a fast-casual restaurant chain known for using farm-to-table ingredients, and its closest location is in Rochester. Sciera confirmed B.Good, and he said the company has signed leases with other tenants that he could not disclose.

"It would be game changing for a metropolitan area like Buffalo," Colleen DiPirro, CEO of the Amherst Chamber of Commerce, said of WS Development's plans for the plaza.

The development could open as soon as 2019. The plan requires a number of variances from the town zoning code and will undergo reviews by the town.

"This is a plan that we feel really good about," Sciera said, "from the perspective of what we like to do and the recipe of retailers and great pedestrian experience and engaging with the community on the green."

WS Development paid $18.5 million for the Northtown Plaza in 2015 and spent the years since working to bring in new, high-end tenants and preparing for an estimated $75 million transformation of the 65-year-old center. The company for a long time didn't reveal specifics about its plans, beyond identifying Whole Foods as an anchor. But it did nudge out existing tenants.

The plaza today is empty of its original businesses except for the Treats Unleashed pet store, KeyBank and a Dunn Tire that has found a new location.

By mid-September, however, Whole Foods had opened to fanfare and WS Development had revealed details about its plans for an "open-air lifestyle center." A 10,000-square-foot rectangle of green space will host free yoga classes, movie nights, ice skating and happy hours for dogs and their owners, known as "yappy hours." The company also named the three retailers – West Elm, Pottery Barn and Williams-Sonoma – as confirmed tenants.

The News reported on L.L. Bean's lease earlier this year. Sciera said the company remains in negotiation on a lease with Treats Unleashed.

When talking to national chains, WS has highlighted the extensive road network into the site and the population density and favorable demographics of the surrounding neighborhood.

Merchandising plans created by WS Development reveal the kind of tenant the company hopes to attract to the new-look "NorthTown," as it calls the center.

The News has obtained two plans, one from March 2015 and one from last December, and comparing the two shows how the project has evolved. Only half a dozen or so companies show up on both of the plans.

And the five confirmed tenants are found on the December merchandising plan.

Lake Effect Ice Cream is another on the wish list. The Lockport-based ice cream maker, which recently opened on Hertel Avenue, doesn't want to set up in a standard shopping mall or strip plaza but thinks the Northtown Plaza concept would be different, according to co-owner Jason Wulf.

"I've had really good talks with them so far. We definitely are considering it," Wulf said, but there's no signed lease.

Allen Burger Venture is on the developer's wish list, but it sounds like the Allentown beer and burger joint won't be opening a second location at the plaza anytime soon.

"We've had preliminary talks with them but we're not in a position to expand at this point," owner Mike Shatzel said.

And Mabel Danahy was in talks with WS Development for years, but ultimately couldn't reach agreement. The upscale women's clothing store was unwilling to create confusion for its customers by moving out of Northtown Plaza temporarily, during construction, and then moving again into a new store, owner Liz Lennon said. 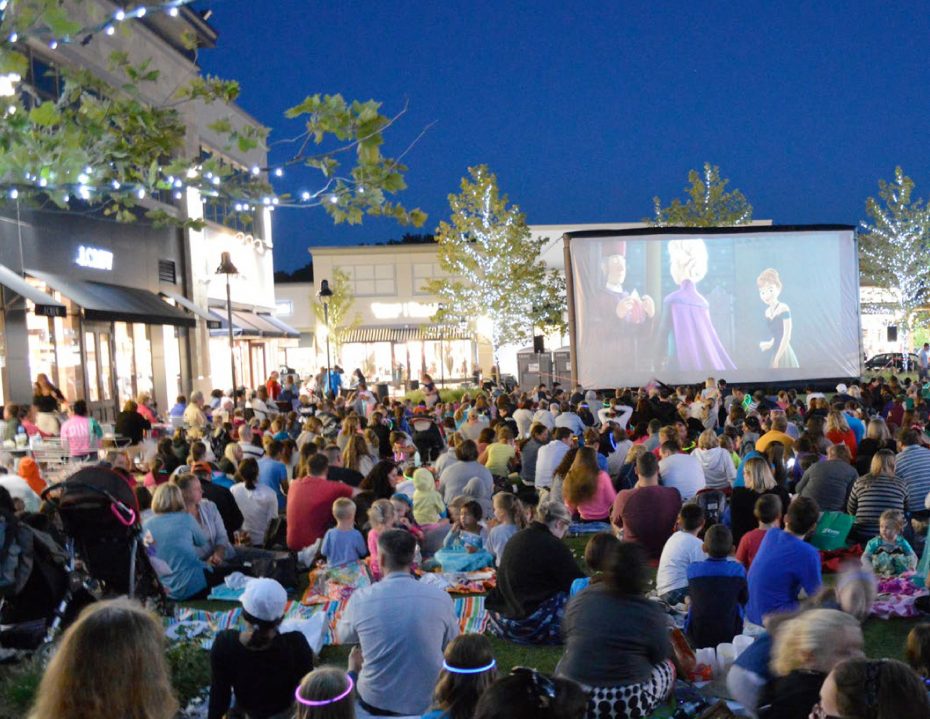 Visitors watch a movie outdoors on the green at a WS Development's MarketStreet shopping center in Lynnfield, Mass., similar to what WS proposes at its "NorthTown" plan in Amherst. (Photo courtesy of WS Development)

WS Development also has updated its design of the shopping center.

The earlier merchandising plan from 2015 had six buildings, but they were in slightly different locations on the plaza footprint and there was no "lifestyle center" green.

By December, the plan included the six buildings and the green laid out the same way WS Development would show in its recent filing with the town's Building Department. The concept plan submitted to the town shows WS would tear down the existing retail storefronts and construct six new buildings in a tight oval just to the west of the Whole Foods.

Sciera said the design was done to make it as easy as possible for people to park once and walk easily from one building to the next.

The town's review of the Northtown Plaza project begins at the Zoning Board of Appeals. That's because, according to Zoning Board Chairman John Radens, the developer is seeking 37 variances from the town's zoning code.

"Someone said to me, 'Do they think our building code is made of elastic?' And that was my reaction," Radens said.

Amherst Supervisor Barry A. Weinstein said he's glad to see the Northtown Plaza redeveloped, but this concept plan tries to squeeze too many single-story buildings onto the site.

Radens adjourned the scheduled discussion from Tuesday's Zoning Board meeting to give WS Development's attorney time to offer justification for the variances, and to give the town's Planning Department a chance to weigh in on the requests.