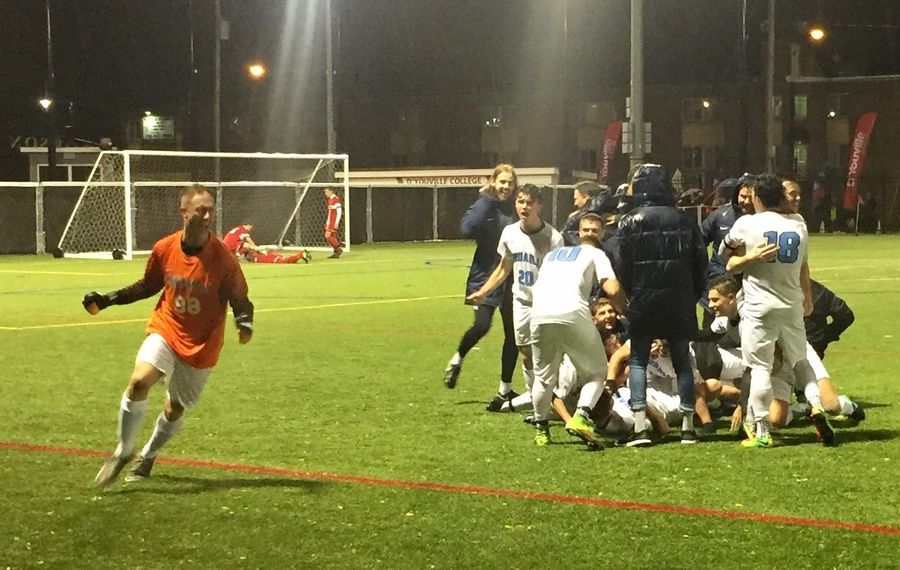 In the regular-season meeting between the Medaille and D'Youville men, the heavily favored Mavs breezed to a 4-0 soccer victory, ripping 15 shots on goal to the Spartans' three.

The Allegheny Mountain Collegiate Conference playoffs are a different beast, however, as it took Micky Blythe's team into the first minute of overtime to send pesky, disciplined D'Youville packing, 1-0, on a dreary Saturday at Dobson Field.

Mitchell Ali was the hero for the Mavericks, scoring 51 seconds into overtime on a rather innocent play. Fellow center midfielder Juan Montoya did well to surge into a dangerous spot on the edge of the 18-yard box, pushing a pass through traffic toward Ali - a common sight in a match where Medaille held the ball often in threatening spots - but this time Ali was first to the ball, clipping it just over diving D'Youville goalkeeper Kyle Dick and into the back of the net.

"I needed to finish it," said a relieved and soaked Ali just a minute after emerging from beneath a pile of celebrating teammates. "I had one of my worst games of the season today, so it felt good to be the one to finally get it."

While frustrated with his team's offensive production - the same theme as Medaille's 1-0 loss to Penn State-Behrend in the regular-season finale - head coach Micky Blythe had high praise for the game-winner.

"We have the quality, it's just delivering in the big-game environment, a big-game setting. However, after a goal like that, after we dug in and dug in, when we thought it wasn't coming, seasons can kind of hinge on such goals," the third-year coach said. "When we think we've tried everything, and they do pop up - Mitchell with a cracking finish."

But the match's story was less about Medaille's misfiring offense and more about D'Youville's admirable defensive resolve, keyed by center back Josh Hammer, who played through an injury for much of the second half, and goalkeeper Kyle Dick, who finished with 14 saves.

"I have to give full credit to the whole team. It wasn't just one player or the five players back there, it was everyone," said Murphy, who sat either 10 or 11 players behind the ball for much of the match. "We knew [Medaille] were going to have a lot of the ball - they're a very talented team, very well coached. We were lucky at times, for sure, but we were able to frustrate them and keep them in front of us as much as we could. I'm proud of my guys; they left their hearts out on the field."

"Credit to Coach Murphy all the way," added Blythe. "Credit to the ownership that D'Youville took tonight. Every last one of them was playing out of their skin for the shirt, for their coach, for each other."

Medaille travels to Mount Aloysius (Cresson, Pa.) for the AMCC semifinal at noon Wednesday, Nov. 1. The conference finals are slated for 2 p.m. Nov. 4 at the higher seed.

*GAME-FLOW: Medaille out-shot D'Youville 29-3 overall - and 14-0 on target - even worse than the last meeting.

Teasing crosses in the six-yard box skidded off the ground, whizzing past Mavericks on the doorstep for tap-ins. Driven free kicks caromed off bodies and - instead of deflecting to a Medaille player - fell softly to Dick. Well-struck shots were blocked by sliding Spartans, and whipped-in crosses were at least deflected or challenged by a D'Youville marker.

Medaille's offensive third was so congested with bodies that, even though the Mavs were quicker than usual in switching the point of attack, the D'Youville defensive amoeba adjusted in time.

Even so, Dick was called upon for a moment of brilliance in the dying seconds of regulation, as Medaille's James Lang stepped into a shot 12 yards from goal. The freshman goalkeeper reacted in an instant, however, contorting his body to push majestically over the crossbar, a mesmerizing save.

"I have massive admiration for what Murph has done for the [D'Youville] program for the last few years - but not only that, but since the last time we played them," Blythe praised. "The character and the ownership of the team in their defending, there's a real pride in it. They were extremely unfortunate not to take it the whole way to penalty kicks."

Medaille almost endured the nightmare that befell Buffalo State on Saturday, by virtue of a scary sequence in the 74th minute. Leaving his 18-yard box to gather the ball with his feet, Mavericks keeper Callum Christie did not put enough weight on his pass to a nearby defender, allowing D'Youville's Hunter Sherman - scorer of seven goals in his last four games - to pounce on the loose ball and gallop toward goal.

With Christie retreating, Sherman hit a low shot toward the right post ... humming just inches wide of the gaping goal mouth. It wasn't a sitter by any means, but it was a brilliant scoring chance out of nothing.

*FINAL WORD: "We're losing five very important members of our team, the seniors that are graduating. They've all played four years, and they've been rocks for this program. Those guys aren't going to be easy to replace. But I really do like the core that we do have coming back, and there's a bright future. I'm excited we were as close as we were in this game." - D'Youville head coach Brendan Murphy