Khalil Mack doesn’t have much to say about Buffalo these days. But he’ll make an exception for his favorite wing spot.

The former University at Buffalo star and reigning NFL Defensive Player of the Year’s fondness for Elmo’s Bar & Restaurant will be the subject of a feature for “The NFL Today” pregame show on CBS before the Bills' game against Mack and the Oakland Raiders on Sunday.

Mack visits Elmo’s whenever he is back in Western New York and did so again Saturday. Mack, along with his parents Sandy and Yolanda and younger brother LeDarius, a junior linebacker currently redshirting at UB, stopped in to eat lunch and watch the Bulls’ away game on TV. They caught up with former UB quarterback Joe Licata and were later joined by about a dozen Raiders defensive players.

“Khalil likes going back to Buffalo so much because of places like Elmo’s,” said Licata, now the athletic director and football coach at Bishop Timon-St. Jude High School. “He gets treated like a real person. He’s a normal guy who happens to be the best defensive player in the world. At Elmo’s he’s treated like a normal guy.” 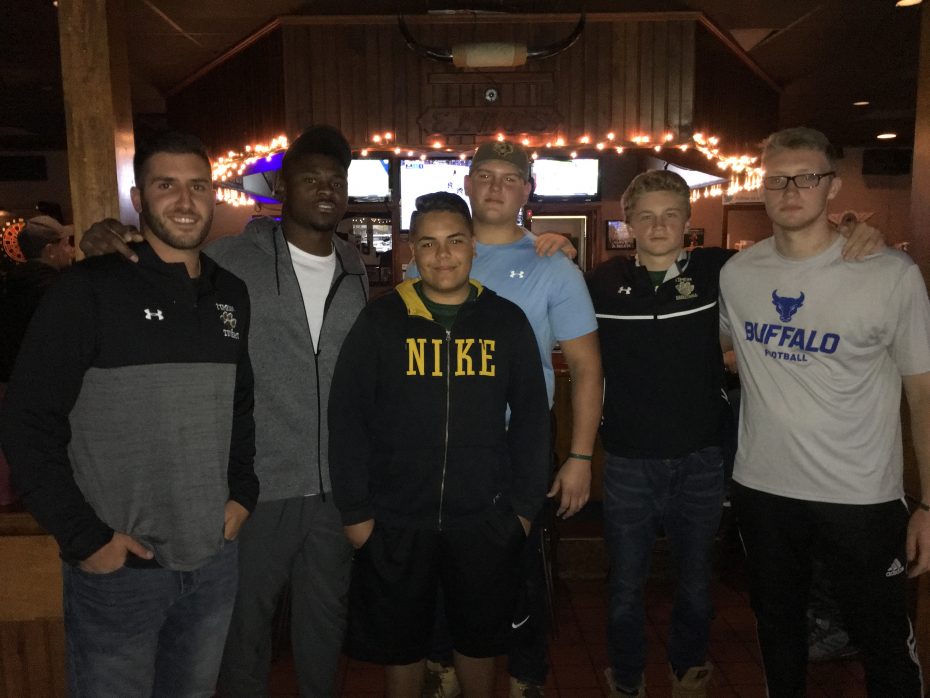 Mack treated his teammates to 200 wings in a variety of flavors — including his usual order, Cajun/mild double-dip —  and “Billy” cheese fries, according to bar manager Adam Blake.

“He’s the same guy he was when he was here at UB,” Blake said. “He’s one of the regulars.”

Located in the Getzville Plaza on Millersport Highway, two miles from UB Stadium, Elmo’s opened in 1985 and its wings were a bit of a local secret until becoming more widely known in recent years.

The Bulls began rushing to Elmo’s based on the recommendation of former wide receiver Fred Lee. Returning to campus after working at the Country Club of Buffalo one night, Lee stopped at Elmo’s on a whim.

“I remember going in this little hole-in-the wall and the wings were amazing. I was blown away,” Lee said. “The Cajun wings were literally the best I ever had. All my teammates were going to Duff’s and I went back and told them, ‘you won’t believe the best chicken wings in America are at this little place Elmo’s.' "

Lee, a native of Chester, S.C., now living in Laramie, Wyo., added, “I’ve been all over the country and I still haven’t found a place better. I told Adam to give me the recipe so I can open an Elmo’s out here.”

“We’ve always done it but it didn’t used to be on the menu,” head cook Ryan Stitt said. “It’s like a normal wing, we shake it, Cajun, barbecue, honey mustard sauce, grill it and then put it back in the bowl and shake it again with hot, medium or mild.”

Stitt, a second team all-Federation hockey player for Williamsville North in 2003, said he didn’t used to enjoy getting frequent orders for double-dip wings because of the extra work involved but has come to appreciate the regular visits from UB players.

“When they come in you feel a little bit more special about what they are doing,” Stitt said. “And people listen to what they say. So if the food is good and they have a big audience, they tell people and the word gets out.”

Word eventually got to the Bills' locker room, via Marcus Easley, and after a while, the entire wide receiver group was making regular trips to Elmo’s.

Lee said he and his teammates enjoyed the relaxed vibe at Elmo’s as much as the wings.

“We were always looking for a place that wasn’t too rowdy and wild,” Lee said. “Elmo’s had the coolest, simple atmosphere. We established the place as our little home away from home.”

Elmo’s is closed on Sundays but draws its largest crowds of the year when the Bills play on Monday or Thursday night.

“Those are huge nights for us,” Blake said. “We fit 106 and its overflow. When the Bills are playing, it’s electric in here.”

The place gets similarly packed when Mack plays in a nationally televised game.

“Everybody in here roots for Khalil because he’s a great guy,” Blake said. “He’s a good person and we want to see him succeed.”

Specials: $20 for double order of wings and pitcher of beer

Jonah Bronstein is a BNblitz.com contributor. Suggest a bar for him to watch the Bills at jonah.bronstein@gmail.com.