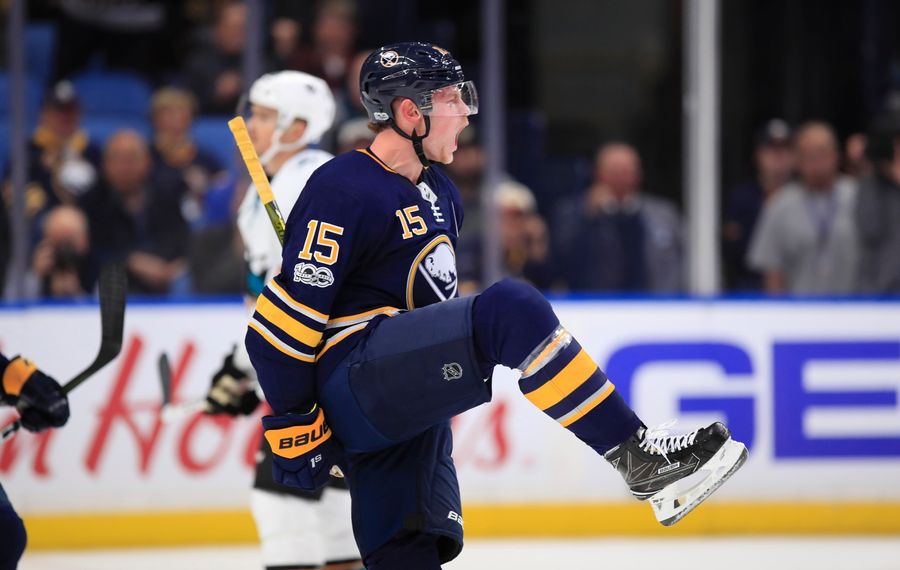 By the time Jack Eichel removed his equipment, he was calm. He analyzed the latest loss and the poor start to the season with encouraging words and a few shrugs.

Two other moments stood out from Eichel's 21st birthday Saturday:

* As he walked from the ice to the dressing room following the 3-2 loss to San Jose, he put both hands on his stick and raised it above his head. He snapped the lumber in half over his knee without missing a step while unleashing a yell.

Jack Eichel furious after Sabres lose to the Sharks on his 21st birthday pic.twitter.com/H5HHHZdv5Y

* With 12:58 left and the game tied at 2-2, Eichel got alone in front of the Sharks' net. He wound up for the one-timer and couldn't fully connect. The puck soon went out of play, and the center looked skyward in a mix of disbelief and disappointment.

"I'd like to have that one back," Eichel said in KeyBank Center. "It kind of ran up my stick a little bit, but I think that's kind of the story of the game. They get some good bounces, and the puck bounces the opposite way for us. It's frustrating.

"I thought we played a real good game. To not get any points out of it is frustrating."

If only that was the extent of the frustration.

The Sharks scored with 3:52 left to play Saturday to beat the Sabres in KeyBank Center on Saturday.

The loss dropped Buffalo to 3-7-2. It seems the only players who can score are Eichel, Jason Pominville, Ryan O'Reilly and Evander Kane. Even when they find the net, it doesn’t always count.

While most people get things for their birthday, Eichel had something taken away. He ripped a power-play shot past San Jose goaltender Aaron Dell late in the first period, but a coach's challenge and video review nullified the blast.

"It's definitely a tough one to swallow," Eichel said. "Those ones get you going, first-period power-play goals. Our power play's been struggling. It's not like I've been finding the back of the net a ton."

He appeared to have his fifth goal in 12 games, but Sam Reinhart clipped the glove of Dell with his skate while trying to tip Rasmus Ristolainen's shot. Dell spun a bit in the crease while making the save, and he was unable to stop Eichel's rebound chance despite sliding over.

"The rule's there and put in place if the goalie can recover on the next play then it should be a goal, and in my eyes and our eyes he got himself back in and it went through him," Reinhart said. "It's a little tough to swallow."

"If Sam is outside the blue paint, I think that call goes in a different direction," Housley said. "I can disagree with it all I want, but I think if we were to call that and call goalie interference, we'd probably want the call to go the same way for us.

"It's unfortunate. I thought he had time to reset, but since the initial contact came within the paint, they definitely have an argument."

The goal would have been a triumphant reunion for the five guys who keyed Buffalo's top-ranked power play last season. Eichel, Reinhart and O'Reilly teamed with Kyle Okposo and Rasmus Ristolainen after being split up following a slow start.

"We obviously have to earn that right to go out there together," Eichel said. "We hadn't been doing too well earlier this year. Obviously, coach makes a quick change in-game, and I thought we went out there all on the same page.

"We knew we needed to outwork the penalty kill and just get back to what made us successful last year, and I thought we did it. We had some real good looks. We moved the puck well. We moved it fast.

"Maybe some nights you get two on the power play or three, but give credit to their goalie and their PK. They made some big plays."

The Sabres, once again, just didn't make enough. San Jose tied it, 2-2, from the doorstep with 11.7 seconds left in the second period. Logan Couture scored the winner on a pinpoint shot from the bottom of the left circle with 3:52 remaining.

After that, it was time to break a stick.

"We probably deserved a little bit better fate, but it's the game of hockey," Eichel said. "It's a new day tomorrow, and you've just got to come back and work. It's a long year, and it's one month. The biggest thing for us is to look at it day-by-day now and try and get better.

"We'll build off it, but obviously clean it up in some areas. We've got to find a way to get some wins, just start rattling them off here."

Inside the Sabres: Derek Roy's dream of Olympic glory is alive again