The marble figure stands motionless in a Plexiglass box, the smallest details of her hands and elaborate lace dress etched in stone. The statue went up in Jamestown's Lake View Cemetery more than a century ago, after the death of the young woman it was built to represent.

The many wedding day stories about "the lady in the glass case" remain wildly alive:

The lady was on the way to say her vows when she died from a bee sting.

She fell from a boat and drowned in Chautauqua Lake, just before the ceremony.

Her fiancée left her at the altar, breaking her heart in such an extreme way that her death physically turned her to stone, and her grieving father chose to protect her with glass.

Those tales were shared recently by Wyatt Taber, Matthew Roehmholdt, Alayne Schobey and Courtney Graham, students at Jamestown High School. The students were picked at random, by their teachers, to talk about "the lady," the common description of the monument.

The teens did a beautiful job. In the way of countless generations, they recalled how "big kids" – often older brothers or sisters – solemnly insisted that the dress on the statue is the real thing, an actual wedding dress preserved outdoors, eternally and impossibly, by some alchemy beyond easy understanding. 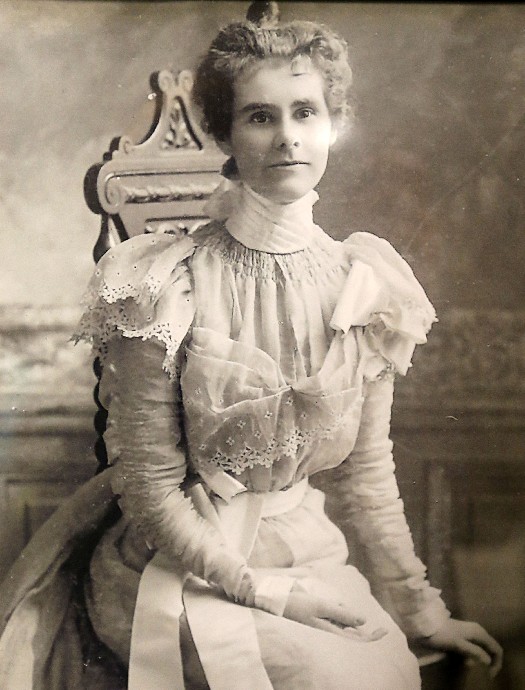 Grace Galloway, in the 19th century dress that Sam Genco believes was used as the model for a legendary statue. (Courtesy Lake View Cemetery)

Those tales were often shared after sunset, on dark porch steps or beneath streetlights. Older kids told them that sometimes, late at night, the lady leaves the case and walks the city. Be careful, those stories went. If you go to the cemetery and the glass case is empty, get out of there fast.

You don't want to encounter the lady, on the road.

With Halloween approaching, the students – with a cheerful understanding that all these tales were folklore, and not fact – shared 21st century versions of one of the most enduring legends in Western New York. The statue exists. It retains a lonely power when you spot it from North Main Street in Jamestown, a city of about 30,000 in Chautauqua County.

Of the teens, only Graham had heard the core of the real story. 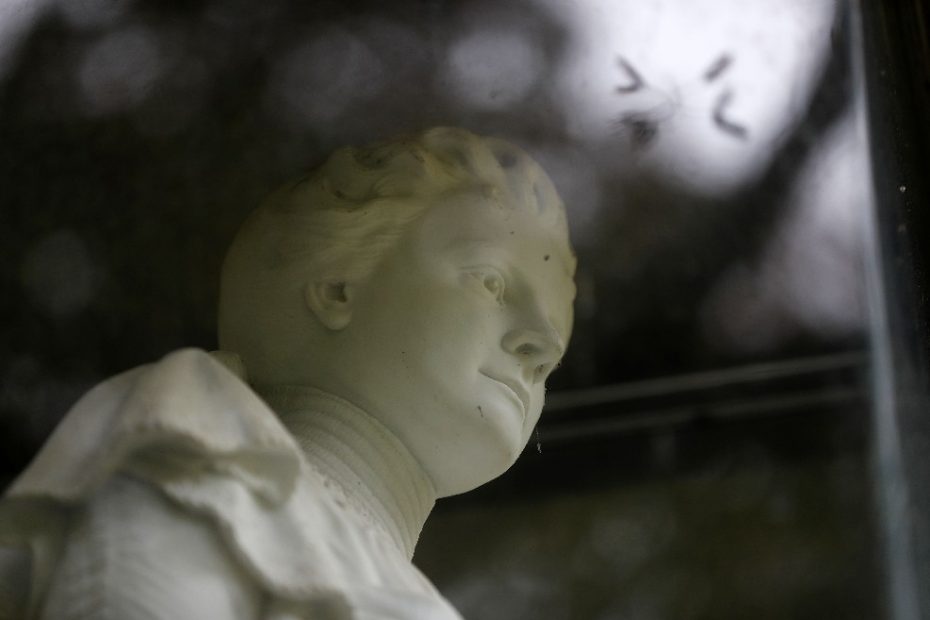 Grace Galloway did not die on her wedding day. She was never a bride, and she hardly carries a whiff of menace. The narrative is brought to flesh and blood by 94-year-old Lois Galloway of Jamestown. She is the widow of Fred Galloway, Grace's nephew, who settled in Orchard Park after World War II. Fred's grown children, Greg and Deb Galloway, still live in that community.

Fred was the son of Grace's only brother. For years, Lois and her stepchildren helped tend the family plot around the statue, a task now handled entirely by a family trust.

To them, the silent figure beneath the glass is a comfort, and a friend. 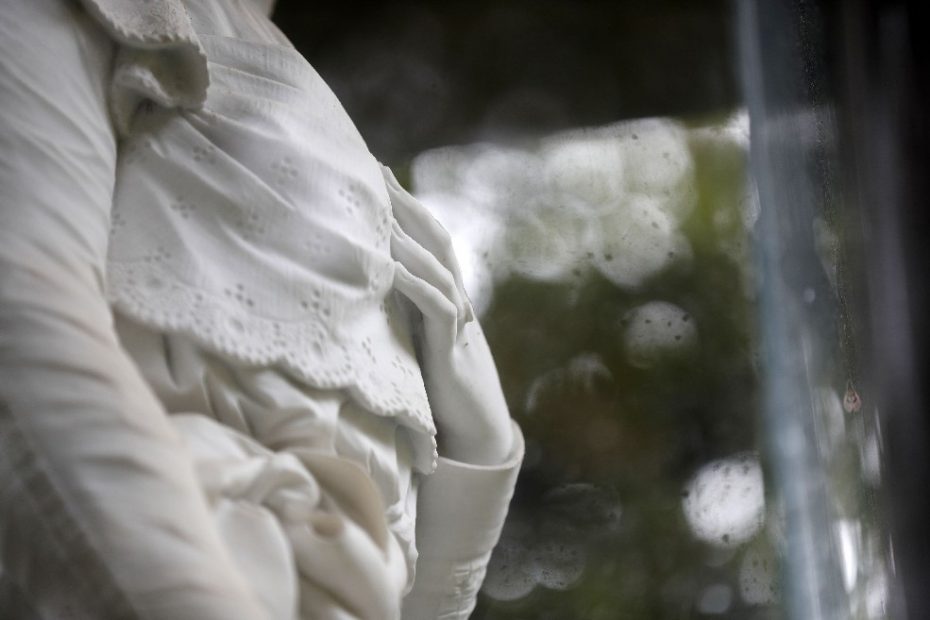 "As a child, all I knew is that she was Aunt Grace, she was beautiful and that we cared for the grave," Deb said.

The real story, carefully detailed, can be found in a file assembled by cemetery superintendent Sam Genco. He makes sure he is prepared when visitors to the statue - and Genco said he still gets plenty - wander over to the office and ask:

Who was Grace Galloway?

Born on Oct. 5, 1871, she was the daughter of John and Sarah Galloway, a couple made rich by the oil business. For years, they owned a gracious mansion that is now the home of the Jamestown Moose Lodge, a social club.

Grace was a talented singer who performed throughout the region. Her parents, Lois was told, encouraged her to sing in church but also set strict guidelines. They forbade Grace to sing for money.

She left Jamestown to study music in Boston, where tuberculosis brought her dreams to a hard end.

Her father, turning to the best medical advice of the time, put her in the care of sanitariums in Saranac Lake and Asheville, N.C., a national center for tuberculosis treatment. The disease was too much. At 27, Grace died in Pittsburgh on Nov. 2, 1898, while traveling by train to Asheville.

Her obituary described her as having a "cheerfulness and brightness .... and generous character." Old clippings at the Fenton History Center in Jamestown recall how the Rev. Dr. W.P. Hellings, the Baptist minister who presided over her funeral, offered a sermon he called, "And they shall walk with me in white," a theme that would be central to the statue in the graveyard.

One element of the legend is absolutely true. The monument was an expression of grief by a distraught father. John Galloway was reportedly inspired by a statue he saw in a Buffalo cemetery, most likely Forest Lawn. He sent one of Grace's favorite dresses to a sculptor in Italy who worked with Carrara marble.

Galloway paid more than $2,000 – big money at the time – for a monument that portrays his daughter in life scale at 5-foot-6 inches tall, a rendering so exact and delicate it captures the fabric of her dress and a ring on her finger. 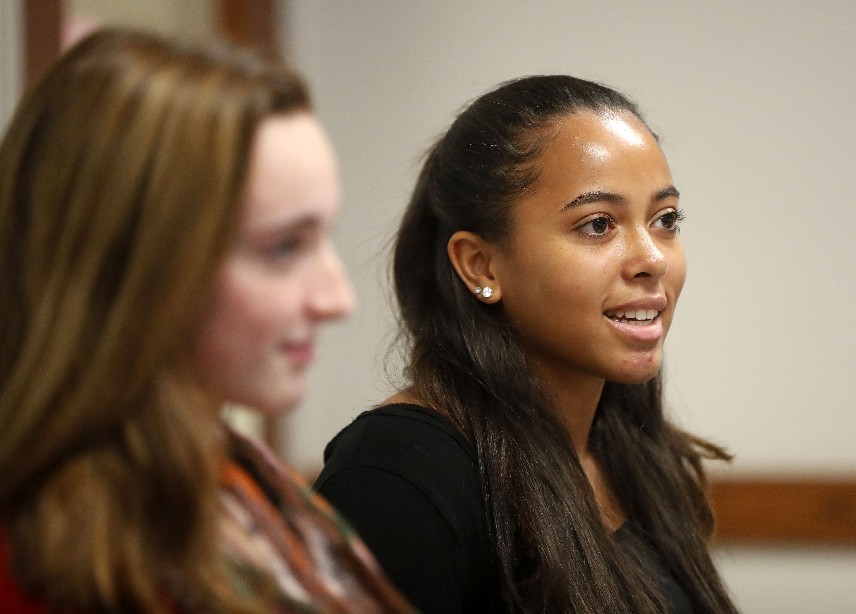 The monument was completed in December 1901, with glass set around it, old clippings recall, "to protect the exquisite marble."

John Galloway could not anticipate how his choice of the white dress would ignite a lasting myth about a wedding day tragedy.

Photos of Grace, dark-eyed and dark-haired, hang on the wall of the cemetery office – including one that shows her in the dress believed to be the one used for the statue.

Genco, Lake View's superintendent, said the lady in glass used to be the greatest attraction in the cemetery, drawing awestruck visitors from far away.

"Now she's taken a little of a back seat to Lucy," said Genco, noting how the ashes of comedian Lucille Ball, raised in nearby Celoron, were moved to Lake View from Los Angeles about 15 years ago.

Still, the statue retains such haunting power that many pilgrims leave small tokens for Grace, such as white roses placed there this month, maybe in honor of her birthday.

No one is sure how a heartbreaking story of loss transformed into a ghostly legend about a bride. But Genco has a theory.

Early in 1924, The Jamestown Evening Journal published several stories recounting how a woman in black robes  approached a trolley car by the cemetery, along Buffalo Street – then vanished into thin air in front of the trolley operator and his startled passengers, leaving behind a smell of sulfur.

The incidents reportedly continued, accounts so vivid that crowds began showing up in that area at night, hoping for a glimpse of the specter. Eventually the furor died away, but the sightings weren't that far from the Galloway statue, and Genco believes the two legends, of the robed and ghostly passenger and the bride beneath the glass, meshed together in the civic imagination.

Eventually, they overwhelmed the truth. 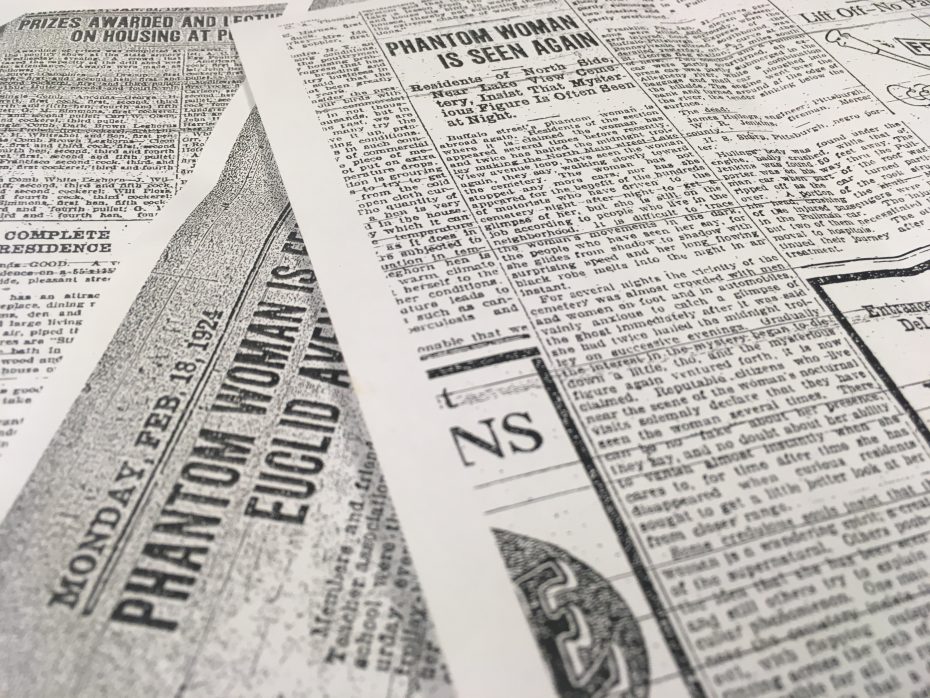 As for Lois Galloway, her wedding to Fred Galloway was a second marriage for both. She lived in Orchard Park until her husband's death in 1980, then returned eight years later to her native Jamestown.

Lois has lived to see the digital age give the legends about Grace a broader reach. Turn to Google, and you'll find  endless versions of the tale, enhanced by photographs. Some people say the lady died in a carriage when the horses reared, on her wedding day, and she was struck by a tree limb. Others say the statue is her actual form, preserved by a delicate layer of marble and protected by the glass.

"None of those stories are the case," said Greg Galloway, Grace's great-nephew in Orchard Park, of the many wedding day tales about the statue.

For the most part, he said, the fascination is harmless. The Galloways take it in stride. Still, he remembers how the family had to install Plexiglass more than 50 years ago, because vandals kept shooting BBs into the glass. 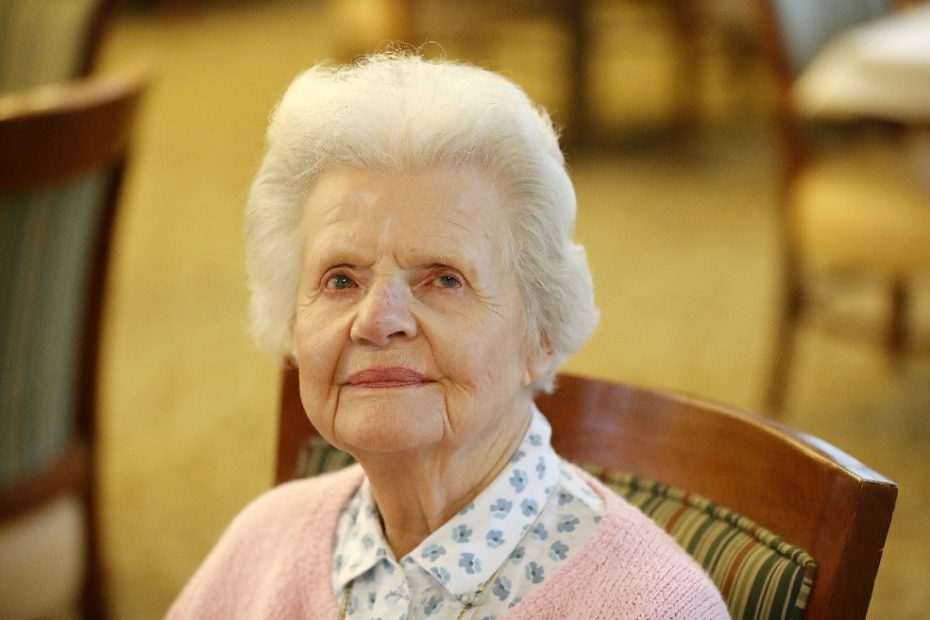 For those familiar with the tale, this time of year always make them think of Grace. She was born 146 years ago this month. The 119th anniversary of her death is two days after Halloween. The tall tales live on, given new energy by the Internet, but the Galloways think the truth has a strength unto itself.

Their great-aunt was a talented singer who died far too young, without a husband or children to carry on her memory. Her grieving parents built a magnificent and exquisitely detailed monument – showing their only daughter in her favorite dress – of such delicate craftsmanship they felt a need to put it under glass.

Lois Galloway, at that statue, has never felt a trace of fear.

Even now, before that lady, she just wishes she'd known Grace. 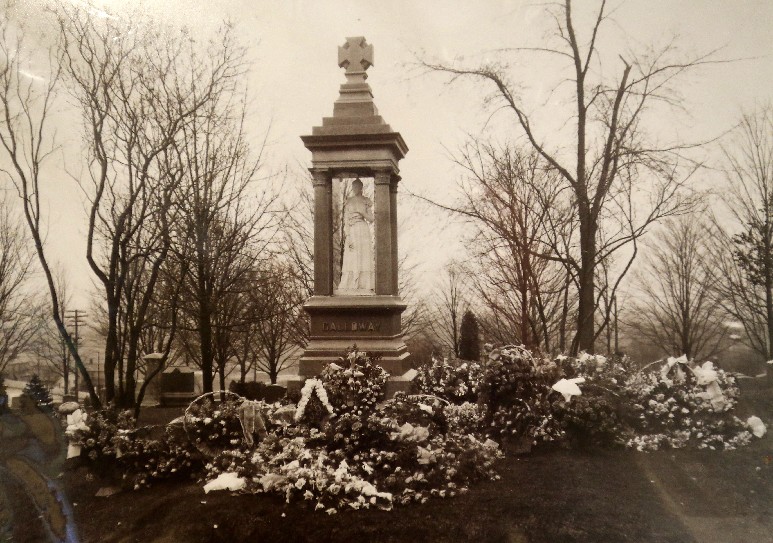