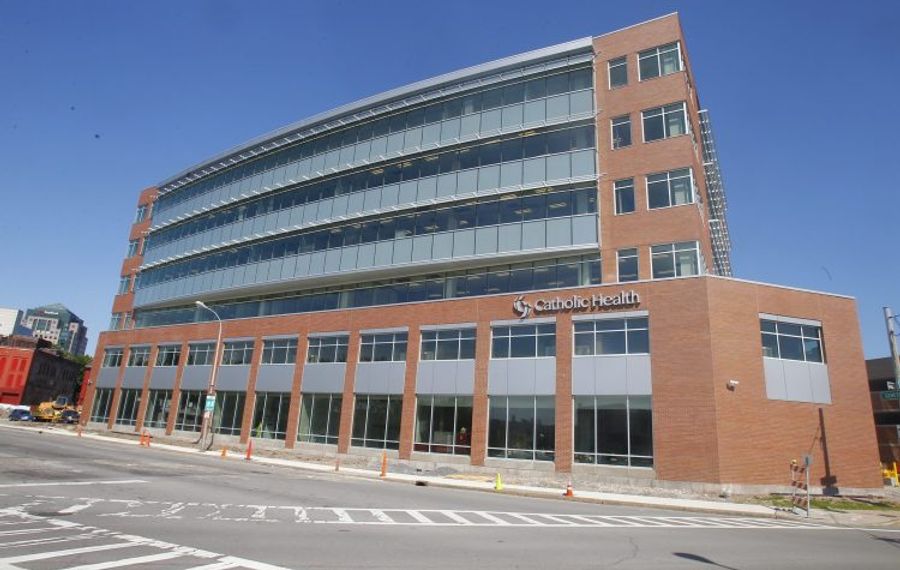 Catholic Health will pay $6 million to settle a whistleblower lawsuit over allegations that its nursing home subsidiary overbilled Medicare and Medicaid for rehabilitation therapy services – including providing unnecessary therapy to some patients.

The hospital system agreed to enter into a five-year corporate integrity agreement with the Health and Human Services Office of Inspector General to ensure its compliance with the regulations.
The settlement arose from a case brought by two former employees.
The case came under the False Claims Act, on behalf of the government, which entitles whistleblowers to a portion of any settlement – in this case, $990,000.
The hospital system was accused of submitting false claims to Medicare, the federal health program for individuals 65 and older, and to Medicaid, the state-federal health program for the poor, for speech, occupational and physical therapy between 2007 and 2014 at three nursing homes. The nursing homes were Father Baker Manor, St. Francis in Williamsville and the McAuley Residence in Kenmore.

The claims involved patients referred from hospitals for short-term rehabilitation as well as long-term care residents.

“A healthcare system that is infected with dishonesty is susceptible to one of the worst afflictions known to mankind – human greed,” Acting U.S. Attorney James P. Kennedy Jr. said Friday. “Today’s settlement demonstrates our unwavering commitment to eradicating this cancer from our federal health care programs.”

The subsidiary, now known as Home & Community-Based Care, filed claims for the highest, most expensive levels of therapy that were not reasonable, necessary for patients, and unsupported by records, according to the U.S. Attorney's Office.

Catholic Health, in a statement, said the organization admitted no liability or wrongdoing in the settlement, and that the government’s case was based on a small sample of cases.

The system holds the position that the care was provided in ways that were approved by doctors and watched over, Catholic Health officials stated. The hospital system's patients also returned home faster that patients elsewhere, according to Catholic Health.

Catholic Health said litigation of the case would have gone on for years, consuming a lot of resources, and that by agreeing to resolve the matter, it can focus on caring for patients.

Catholic Health includes Mercy, Kenmore Mercy, and Sisters hospitals, as well as the St. Joseph Campus in Cheektowaga. It no longer operates the St. Francis skilled nursing facility, which was sold in 2015.

Based on more than $1 billion in operating revenue in 2016, the system ended the year with a slim operating margin, earning $149,000 from operations and $5.6 million on the bottom line, according to an analysis by rating agency S&P Global. That was the 14th consecutive profitable year for the organization.

Joseph D. McDonald, president and chief executive officer since 2002, recently announced he will retire in the spring, a decision unrelated to the settlement, officials said.

The case was filed by Melanie Duhaine and Loda Trzebuniak, both registered nurses, who tried repeatedly over more than a year to bring the problems to the attention of senior management at Catholic Health, according to their attorney, Harvey P. Sanders.

"Physical, occupational and speech therapy is physically draining and is only worthwhile if it will lead to patient improvement. Unnecessary therapy can do more harm than good, leaving the patient in a weakened state. This is especially true for end-stage terminal patients," Sanders said, speaking on the women's behalf.

In hopes of resolving the problems internally, he said Duhaine and Trzebuniak made multiple case-study presentations, engaged in one-on-one meetings with decisionmakers, and provided supporting information to Catholic Health about their concerns.

"It was not their desire to go to court or to bring any legal action against Catholic Health," Sanders said, noting that the two former employees respect the many health care providers they worked with over the years.

"They hope that bringing this action will help spare future patients from experiencing the potential harm of unnecessary therapies," the attorney said.

Upon taking over responsibility for nursing and sub-acute rehabilitation facilities, she has conducted a review of performances, and increased management oversight, according to Catholic Health.

“These allegations were never about the quality of care or the outcomes our patients achieved,” Leonardo Sette-Camara, corporate compliance officer for Catholic Health, said in a statement.

“We believe the care provided was appropriate and enabled our patients to return home sooner than if they had received less intense therapy. Defending these types of subjective allegations of overutilization, however, requires an unsustainable and ultimately unacceptable allocation of financial and personnel resources,” Sette-Camara said in the statement.

Reimbursement at skilled nursing facilities is tied to the level of care provided, which is based on such considerations as the condition of the patient, the type of service, and the number of days and minutes a patient receives the care.

Scrutiny of skilled nursing facilities has grown in recent years.

Government agencies have warned they intend to closely watch for upcoding of reimbursement for services to sub-acute rehabilitation patients.

A 2015 report by the Department of Health and Human Services Office of Inspector General found that Medicare payments for therapy greatly exceeded the costs for therapy at nursing facilities in the United States, and that facilities increasingly billed for the highest level of therapy even though patient medical conditions remained largely the same.

False Claims Act cases have been on the rise. There were 247 new health care cases reported nationwide in fiscal year 2000 and 570 in 2016, according to data from the Department of Justice.

The Department of Justice obtained more than $4.7 billion in settlements and judgments from False Claims Act cases in fiscal year 2016 ending Sept. 30, according to a report issued in December by the department.

The $2.5 billion only reflects federal losses and, in many cases, additional funds for state Medicaid programs were recovered, according to the report.